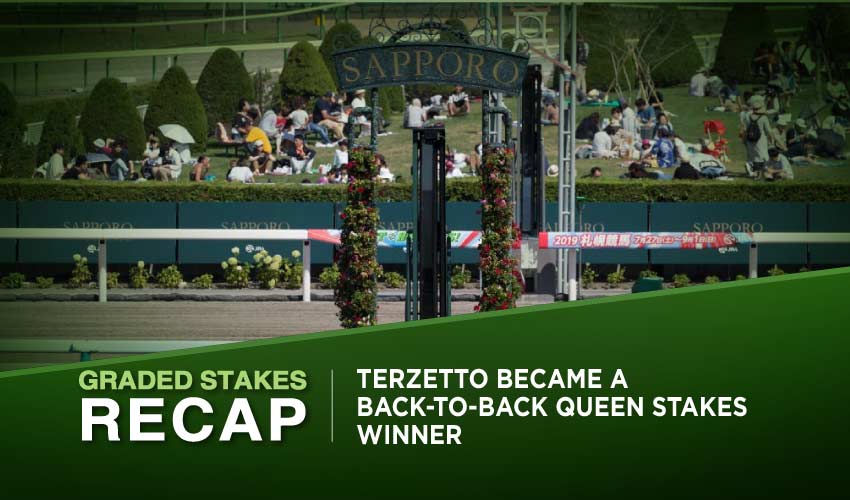 Two G3 events were held at the Japanese track on Sunday, both being the respective peaks of cards at Sapporo and Niigata. At first, three-year-old and older fillies and mares met up in the Queen Stakes at the Sapporo Race Course, where Terzetto became a back-to-back winner of the race. Subsequently, Believer secured her premiere Graded win in the Ibis Summer Dash at the Niigata track.

The G3 turf race for three-year-old and older fillies and mares was held over the distance of a mile and a furlong, while the participants competed for the purse of 72,720,000 Yen. Five-year-old Terzetto (57-10) wasn’t really satisfied with the pace at the beginning but allowed his jockey Kenichi Ikezoe to park her in the midfield.

Still, she travelled at the fence and thus had to wait for a gap to open in the final stretch, but when it happened, the Shoichiro Wada bound mare bolted up. At the last possible moment, she attacked the leading rival and denied finishing Satono Cecil (206-10) by a nose. Crossing the wire in 1m 47.80s, Terzetto triumphed in front of Satono Cecil and the third Rosa Noir (58-10).

The successful daughter of Deep Impact bagged the Queen Stakes for the second time in a row, affirming that the G3 competition is something she still can handle, as, on Sunday, she recorded her third victory at the stage.

Satono Cecil and Rosa Noir both delivered fine runs as they were defeated only in the last strides; however, favourite Water Navillera (6-5) was quite disappointing here as she finished tenth in a field of fourteen contestants. It wasn’t a bright day for a filly who placed in the Japanese 1000 Guineas.

Eighteen three-year-old and older horses clashed in this G3 turf sprint, offering the purse of 78,220,000 Yen. Over the distance of five furlongs, Sin City (4-1) was prominent since the beginning, setting the pace and looking ready to bag the race wire-to-wire; however, Believer (163-10) was yet to be unleashed.

The seven-year-old mare galloped at the rear of the field, and Makoto Sugihara sought some free room for his mount in the closing stage, but fortunately for them, he found it. Once he urged Believer to go forward, the daughter of Monterosso rushed among the rivals, caught the leader in time, and scored in 54.40s. Sin City finished second, a length behind the victress, with Lord Bay Leaf (70-1) defying the odds to finish third.

Although Believer belonged among the oldest participants, Sunday’s triumph was her very first at the Graded stage. The Yoshihiko Ishige trained mare has never succeeded even at the Listed level, winning two Stakes races being her maximum until scoring the Ibis Summer Dash.

Another mare in the field, Sin City, also gave a good effort, unlike contestants who were considerably more preferred than third Lord Bay Leaf. For example, favourite Vento Voce (19-10) didn’t get past ninth place, getting bettered by our pick, eighth Mountain Musume (147-10), too.