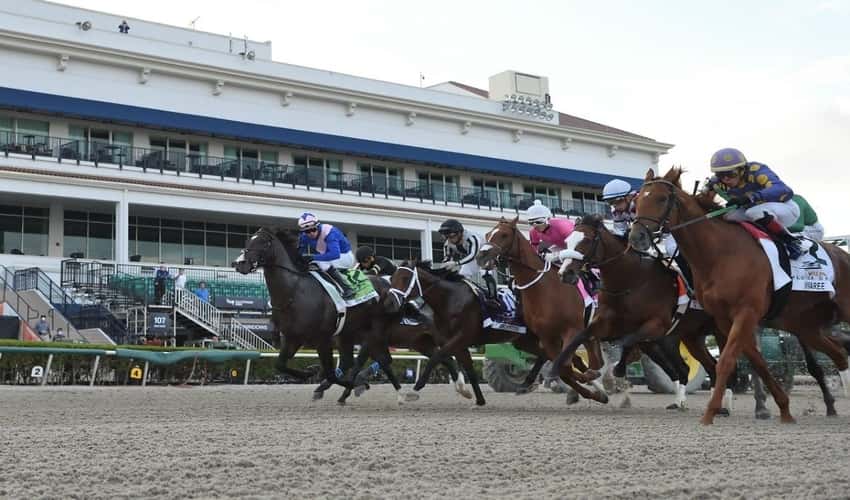 Take a look at the Saturday Races Recap below:

The 5 furlong Grade 3 Gulfstream Park Turf Sprint featured Breeder Cup Turf Sprint favorite; Leinster who was sent off at 2/5 and beat frontrunning High Crime by a head in a driving finish.

Later in the day; a field of 4 went forward  in the Grade 3 Gulfstream Park Sprint after three horses defected to run; in the Pelican Stakes at Tampa Bay Downs.  Mischievous Alex; as the 1/5 favorite cruised to a 2 1/2 length victory over Frosted Grace with Cajun Brother finishing third.

The Fair Grounds card featured; four graded stakes races starting with the $200,000 Grade 3 Mineshaft Stakes and the return to racing by Maxfield;’ and he did not disappoint as he tracked early leader Dinar; and cruised to a 4 length victory.  Maxfield who is now 5 for 5 was 3/5 with Sonneman 2nd and Chess Chief finishing 3rd.

Next up was the Grade 3 Fair Grounds Stakes; going 9 furlongs over the turf course for 4 year olds and up.   On an extremely tiring turf course 43/1 Captivating Moon circled the field to win by 1/2 a length over Logical Myth; with Peace Achieved filling out the trifecta.  3 year old Fillies were next up; in the 1 1/16 Rachel Alexandra (Grade 2) over the main track which serves as a points race; for the Kentucky Oaks.

Clairiere (2/1) rallied late and wore down favorite Travel Column to win by a neck with Moon Swag finishing 3rd.  The final stakes race in New Orleans was the Grade 2 Risen Star Stakes.

With 50 Kentucky Derby points at stakes this was basically a win and your in race for those horses looking to run on the first of May.  Brad Cox trainee Mandaloun at 2/1 was an easy winner by two lengths with Proxy 2nd and Midnight Bouboun 3rd.  The Juddmonte owned Mandaloun stalked the leaders and took the lead easily and was never threatened under Florent Geroux.

Southern California invader Rombauer; closed from way back at 6/5 to defeat the filly Javanica by a head to win the 1 1/8th El Camino Real Stakes at Golden Gate Fields with Govenor’s Party finishing third.  The El Camino is a Kentucky Derby prep race; worth 10 points to the winner and is also a Win and Your In race for the Preakness Stakes.

Bob Baffert trainees dominated the 7 furlong Grade 2 Santa Monica Stakes; as Merneith took the lead on turning for home and won by three easy lengths; with Golden Principal finishing second and Qahira rounded out the Baffert trifecta.  Merneith went off a 9/1 the longest odds of the Baffert trio and was ridden by Edwin Maldanado.

Weather affected the racing as Oaklawn Park and Laurel were forced to cancel their full race cards.

Make sure to check Horse Racing Tote for all the latest horse news; weekend race results, graded stakes, and so much more. For current fixed odds check here: Racebook Tote.

Follow us on Social Media for instant Races Recap updates!