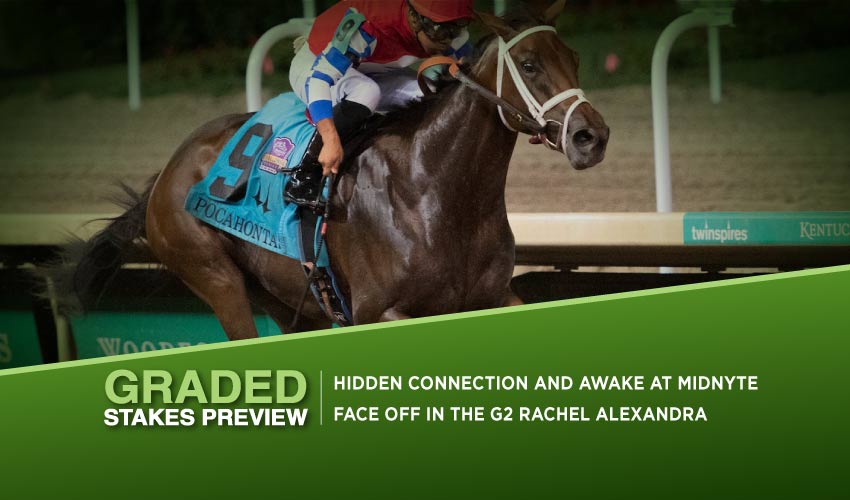 It’s a stakes-heavy afternoon at the Fair Grounds on Saturday, with plenty of quality on the undercard behind the Risen Star. Kentucky Oaks contenders Hidden Connection and Awake At Midnyte face off in the Grade 2 Rachel Alexandra, track specialist O Besos takes on fellow Grade 1 horses Miles D and Olympiad in the Grade 3 Mineshaft, and turf types Two Emmys and Largent make the market in the Grade 3 Fair Grounds.

The Rachel Alexandra, the highlight of the undercard at the Fair Grounds on Saturday, has recently been a good guide to the Kentucky Oaks, with three of the last eight winners going on to victory at Churchill Downs.

Steve Asmussen won this in 2020 and last year and sends in La Crete, a half-sister to last year’s winner Clairiere and unbeaten in two, including a battling display here in a stakes over the extended mile. She lost and regained the lead there and was going away at the wire, finishing three and three-quarter lengths ahead of a never-dangerous Candy Raid in fourth. That willingness augurs well and she’s ready to move up.

She has a similar profile to North County, who is unbeaten in three, winner of a stakes here over the extended mile, and also a tough cookie judged on the way she fought to get up in the last few jumps and win by a neck.

Morning-line favourite Hidden Connection won the Grade 3 Pocahontas by nine and a quarter lengths at Churchill Downs – Goddess Of Fire keeping on late for third – but was then run ragged behind Echo Zulu in the Breeders’ Cup Juvenile Fillies. She can’t be as bad as that, but maybe she’s not as good as the Pocahontas suggests, and she is hung out widest of all in post 11.

Grade 2 Golden Rod winner Dream Lith showed marked improvement to take that Churchill Downs contest last November, although the strength of that race is debatable. A greater danger to the market leaders may be Divine Huntress, who demolished an allowance optional claimer to the tune of almost 13 lengths over an extended mile at Parx Racing last month.

This is a different ballgame but there’s certainly more to come from her. West-coast raider Awake At Midnyte has yet to win a stakes but ran a big race when runner-up in the Grade 2 Santa Ynez at Santa Anita, pushing the winner all the way to the wire and going under by just three-quarters of a length. The extra furlong and a half today should suit and she has nothing to fear from Miss Mattie B, who was six and a half lengths back in third

An open contest for the Rachel Alexandra with plenty of solid form available, and the speed and tenacity of AWAKE AT MIDNYTE can propel her to a stakes breakthrough.

A lack of competitiveness in the turf division often comes to the fore and the Fair Grounds is no exception, resulting in a race that may take much less winning than a similar race on the main track.

Morning-line favourite Two Emmys arguably earned that position on the strength of his upset victory in the Grade 1 Mr D at Arlington, when he was granted an easy lead and just about held on. He tried the same ploy in a stakes over a mile-sixteenth here three weeks ago, but was run down in the closing stages by Forty Under and Halo Again and beaten a head and a half-length into third, with Monarchs Glen and Cavalry Charge a long way back.

Two Emmys is much better off at the weights today and is the one to take out of that race, but he’ll need more, as will Largent, who was running for the first time in almost a year when fourth in the Grade 3 Tropical Turf at Gulfstream Park – the first time he’s ever finished out of the first two – and will be tighter today.

French import Adhamo, a Group 3 winner at home, gets Lasix for the first time but has shown all his form in the mud so it’s hard to get a handle on him, but the lightly raced Santin is a big price for an unexposed, obviously talented individual. He’s two-for-three and was runner-up in the Grade 1 Hollywood Derby at Del Mar last time out, doing his best work late. Further improvement is a given, which is more than can be said for most of his rivals.

It may be worth looking away from the principals in the Fair Grounds, and the very promising SANTIN, already Grade 1-placed, is certain to move up after just three starts.

There is plenty of good Grade 1 form in the Mineshaft, and although none of today’s runners have won at the top level they set a standard that helps narrow down a big field into manageable proportions.

This time last year O Besos was firmly on the Triple Crown trail, running fourth in the Grade 2 Risen Star and third in the Grade 2 Louisiana Derby here before finishing an excellent longshot fifth in the Kentucky Derby. After a seven-month layoff he dug deep to win an allowance optional claimer over course and distance and will be sharper today.

Another stepping back up after showing top-notch form is Miles D, who ran third, beaten just over five lengths, in the Grade 1 Travers at Saratoga behind Essential Quality. Last time out he rallied past subsequent Grade 3 winner Speaker’s Corner to win a stakes at Aqueduct, and with only six starts to his name has the scope to improve again.

Fourth in the Grade 1 Cigar Mile at Aqueduct, Olympiad tuned up for this when clearing away to win an allowance optional claimer at Gulfstream Park by seven and a quarter lengths. He has yet to win at stakes level but belongs here, which may not yet be the case for Untreated, who bids for a three-timer after wins in allowances at Aqueduct.

California hardboot Midcourt has been a regular in Graded stakes on the west coast, but ran only twice last year and may need an easier spot, while Happy American simply needs a different spot – probably Churchill Downs, where he has gained all his three wins – because he’s zero-for-five here, all at a lower level.

Top Choice for The Mineshaft:

Is a tricky, competitive contest but the high-class track form shown by O BESOS makes him the choice, and his comeback success will have put an edge on him.

Follow us on Social Media for Kyoto Kinen updates!