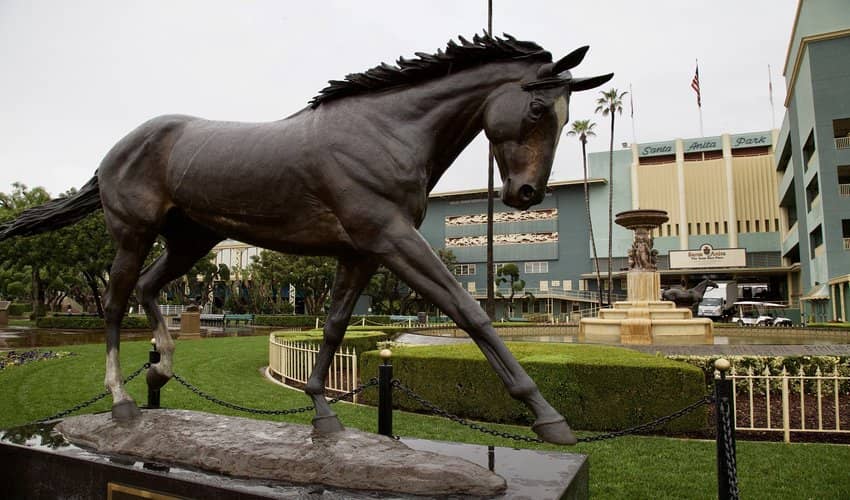 This racing card recap had four top races, but it was the 10th at Oaklawn; which was only a listed stakes race that really attracted the attention of the racing world.  The 1-2 finishers in the 2020 Breeders’ Cup squared off in the Hot Springs Stakes; with Breeders Cup runner up and 5/2 third choice in the wagering CZ Rocket running down 7/5 favorite Whitmore.

Whitmore a 4 time defending champion took the lead coming for home only to have CZ Rocket; who was last turning for home but managed to run down the 8 year old Whitmore with Flagstaff getting third.  Earlier in the day was the Grade 2 Azeri Stakes over 1 1/16th on the dirt.

Letruska figured to be the early leader in the 1 1/16-mile Azeri; but Shedaresthedevil broke quickly and grabbed a 1 1/2-length advantage with Envoutante and Letruska right behind her.  Those two took a run at the leader on the final turn and reached her flank; but were unable to catch the 9/5 second choice in the wagering .  Letruska, the 3-2 favorite, was the biggest threat in the stretch, but could not catch the winner with Getridofwhatsailesu.  The feature race of the day was the the grade 2 Rebel Stakes over 1 1/16th on the dirt with Kentucky Derby points on the line.

In the racing card recap Derby future book; courtesy of Jazz Sports. Caddo River is 16/1 and Concert Tour is 17/1 with Keepmeinmind at 33/1 as of Saturday morning.

Concert Tour broke alertly and Caddo River came up to challenge right from the beginning and with Joel Rosario confidently riding the 9/5 second choice he turned for home and drew away to a dominating victory.  The “other” Baffert horse Hozier at 19/1 closed to be second and Big Lake at 18/1 finished third.  Caddo River at even money tired down the stretch and finished 5th  This was the 8th Rebel Stakes win for Baffert while Concept Tour dropped to 5/1 in the KY Derby future book odds.  This concluded the top races in the east and midwest and led us to a pair of top races at Santa Anita.

The racing card recap at grade 3 San Simeon Stakes at 6 furlongs over the Santa Anita Turf course; was won in a tight driving finish by 7/2 shor Gregorian Chant trained by Phillip D’Amato; over the Peter Miller trainee Sombeyay with Jolie Olympia finishing third.

Jolie Olympia and Cistron went head and head turning for home; when Gregorian Chant came between horses with Sombeyay at the rail and Gregorian Chant got the win.  Next up at Santa Anita; is the Grade 1 Beholder Mile featuring 3 year old eclipse and 2020 Preakness champion Swiss Skydiver; for Kenny McPeek and ridden by Robbie Albarado.

Make sure to check Horse Racing Tote for all the latest horse news, racing card recap, odds and results. Follow us on Social Media for instant updates.