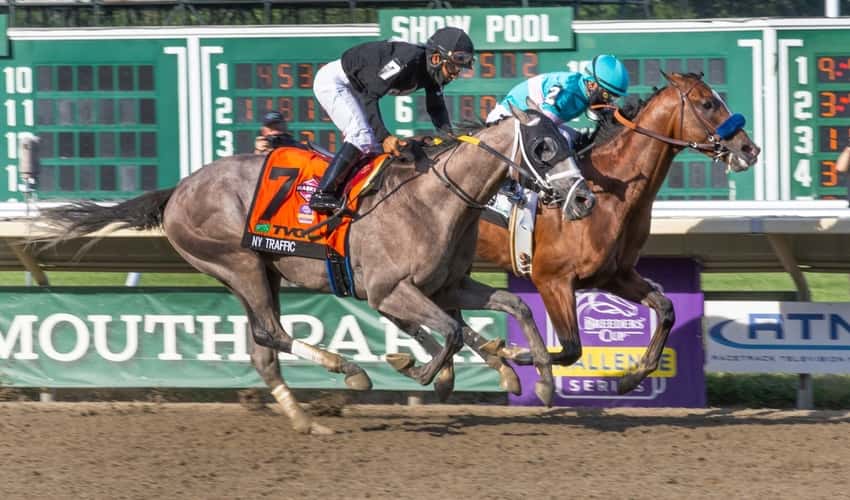 Authentic came in as the prohibitive favorite, paying at -120 when the race finally got underway. However; Ny Traffic made it a lot more interesting down the stretch than it looked like it was going to be after the fourth turn. Authentic had a huge lead, but then Ny Traffic pushed hard at the end making for a photo finish.

An interesting development came late in the Haskell Stakes. Dr Post also joined Ny Traffic down the stretch to challenge Authentic. While Dr Post let up with a couple of lengths left in the race; Authentic also appeared to let up in the waning seconds of the race after appearing distracted. Jockey Mike Smith, in an interview with NBC, said that Authentic is “an extremely talented horse. But he’s still got some growing up to do…he’s got a lot of room to improve.” Baffert was also concerned; noticing that Authentic appeared to lack focus down the stretch. So while he is comfortably in for the Kentucky Derby; now second overall in qualification points; there are still some questions to answer.

Paris Stakes won her stakes debut by pushing past Crystal Ball in the last seconds. Crystal Ball and Paris Lights raced through splits of :24.34 and :47.82 at the first half-mile. Tonalist’s Shape; who had entered in the favorite, put on blinkers for the race and needed to come steady after a tough first turn and was stuck in the middle of the pack.

Crystal Ball hit six furlongs at 1:11.54, but that was when Paris Lights started to draw closer. She drew level at the quarter pole and ended up winning by a head. Paris Lights’ time was 1:50.80 on a fast track. Crystall; Antoinette and Tonalist’s Shape ended up rounding out the top four; which means that all of them earned points toward the Kentucky Oaks.

That gives Paris Lights three consecutive wins; and the 100 points she earned today put her in fourth place on the points leaderboard for the Kentucky Oaks, but she has not yet been nominated for the race. Her next action will likely come at the Alabama Stakes (Grade I) on August 15. Stay tuned for the progress of this prodigious filly.