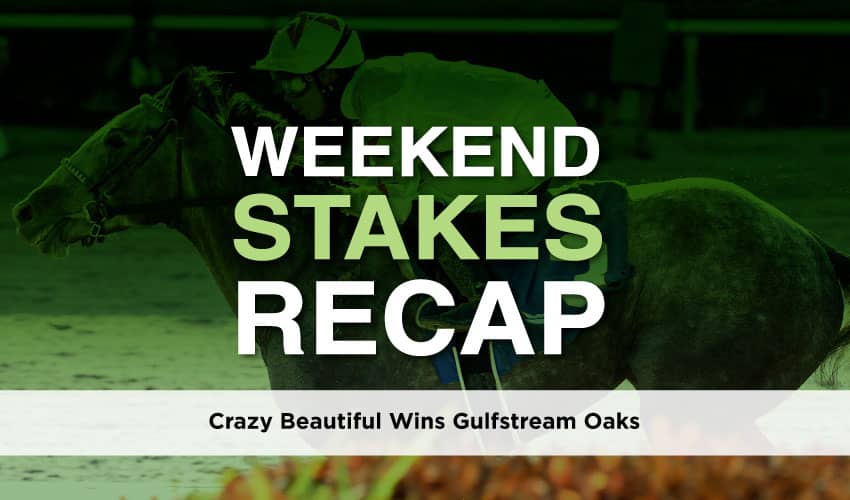 This past racing weekend stakes was stacked full of top races, both in the U.S. and internationally. We witnessed not only a major Kentucky Derby qualifying race but also the world’s richest horse race in Dubai.

Here is a recap of last weekend’s biggest events:

Hall of Famer Todd Pletcher regained his position as a top Kentucky Derby contender once again when St. Elias Stable’s Known Agenda took charge of the field in the stretch to win the $770,000 Curlin Florida Derby Presented by Hill ‘n’ Dale Farms at Xalapa (G1) on Saturday.

The runner finished 2 3/4 lengths ahead in what is considered the top Kentucky Derby prep race at Gulfstream Park. With his victory, Known Agenda was awarded 100 qualifying points, putting Pletcher on track to have his 18th straight Derby starter.

A homebred son of Into Mischief, Soup and Sandwich finished clear in second, three lengths ahead of third-place finisher Greatest Honour.

The other big event of the weekend was the $12 million Dubai World Cup Sponsored by Emirates Airline (G1), the richest race in the world. This year’s edition went to the Americans as Godolphin’s Mystic Guide pushed forward to a 3 3/4-length victory.

The 4-year-old provided Godolphin with yet another win in the event. He became the 12th U.S. trainee to win the Dubai World Cup. The second-place position was taken by Japan’s Chuwa Wizard, while the French-trained Magny Cours finished third.

Crazy Beautiful rallies off the pace in Gulfstream Park Oaks

Phoenix Thoroughbred III’s Crazy Beautiful scored the $200,000 Gulfstream Park Oaks (G2); by 2 1/4 lengths after reeling from well off the pace. With the victory, she received 100 qualifying points toward the Longines Kentucky Oaks (G1) on April 30.

In a highlight of the racing weekend stakes, Crazy Beautiful finished first as the second choice, followed by Millefeuille in second.

Jamaican trainer and owner Steve Budoo took his first graded stakes victory this racing weekend stakes. He got it when local hero Eye of a Jedi won the Ghostzapper Stakes (G3) at Gulfstream Park. The runner finished 5 1/2 lengths ahead in the 1 1/8-mile event.

Eye of the Jedi finished the distance on a fast track in 1:48.83. He was followed by the favored Last Judgment in second and Superfecto in third.

Eye of a Jedi is now 6-6-6 from 32 career starts with earnings of $355,778. He consistently performs well at Gulfstream, with five of his victories taking place at the track.

Tap it to Win returns to spotlight with NYRABETS Sprint win

Tap it to Win was a big name during the 2020 season. He finished fifth in the Belmont Stakes (G1), second in the H. Allen Jerkens Stakes (G1), and third in the Pat Mile Stakes (G2).

Despite not racing since September, he came into the racing staked weekend at the $110,000 NYRABETS Sprint Stakes at Tampa Bay Downs as the 4-5 favorite among a six-horse field. He drew away to a 4 1/4-length victory under Antonio Gallardo as R Mercedes Boy took second, followed 1 3/4 lengths back by Hauntedbythemusic in third.

Make sure to check Horse Racing Tote for all the latest horse news, graded stakes, updated odds, last minute results and so much more.