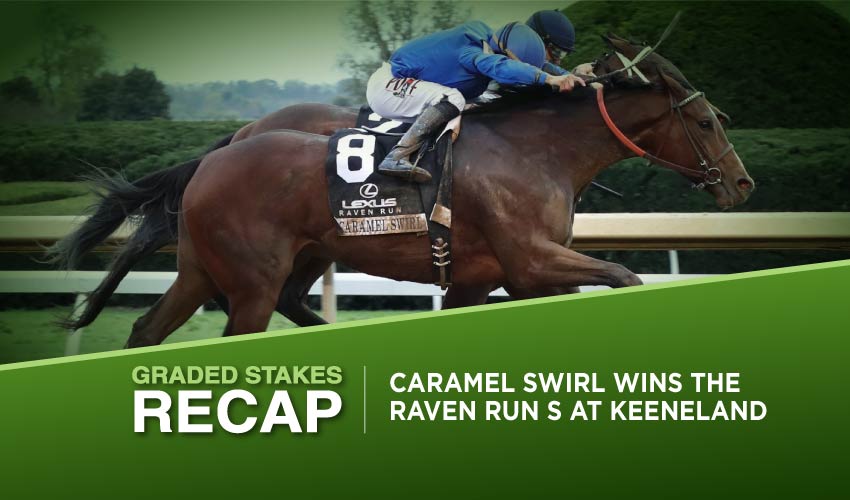 Three exciting Grade races at the turf surface were the headlines during the weekend’s meeting at Keeneland. Three-year-old Caramel Swirl then made amends for her underwhelming efforts at the Grade level so far by battling hard to win the G2 Raven Run S on Saturday, on Friday, the G3 Sycamore Stakes saw a G1 winner Two Emmys losing to an underestimated rival Spooky Channel, while Sunday brought the premier G3 victory for five-year-old mare Summer In Saratoga, who scored the Dowager Stakes.

The first slightly surprising outcome occurred in this G3 turf race for three-year-old and older horses as the G1 winner Two Emmys (37-10) failed to deliver a gate to wire victory over the distance of a mile and a half. The purse of $150,000 attracted the field of 11 horses, while it was the former favourite who took command from the beginning, while another big chestnut, Spooky Channel (36-5), sat behind him at the fence. Piloted by Julien Leparoux, six-year-old Spooky Channel relaxed there throughout the whole race, and as the field turned for home, it seemed Two Emmys was about to draw clear of his rivals and score another Grade triumph. However, Spooky Channel travelled smoothly and had enough left in the tank to close on the leader in the final stretch.

The nearer to the wire they were, the more dangerous he was for Two Emmys, and in the end, Spooky Channel forged his excellent performance into a tight victory. Recording the third G3 win of his career, the chestnut trained by Jason Barkley scored by a neck in 2m 29.71s. Despite losing the race in the final stage, Two Emmys showed a fine effort as the six-year-old has been simply very consistent in this season, while Ry’s The Guy (61-10) stayed on to take third place.

Bama Breeze (201-10) finished fourth, and Another Mystery (45-1) fifth, which suggests other preferred contestants didn’t play a significant role here as Ajourneytofreedom (19-2) was eighth and Glynn County (23-10) ninth. Prior the race, the latter seized the position of the main favourite due to his latest runs at the Grade scene; however, he didn’t come up with anything special on that day and ran a disappointing race.

The G2 turf race for three-year-olds and older fillies and mares basically meant redemption for three-year-old Caramel Swirl (33-10), whose latest performances at the Grade scene were so underwhelming, we didn’t even consider her to make an impact in Saturday’s race. However, the distance of seven furlongs suited her perfectly this time, and with the purse of $250,000 up for grabs, her well-fought victory must’ve been quite rewarding for the connections, including trainer William Mott. Piloted by Junior Alvarado, Caramel Swirl settled in sixth in the first stage of the race, upon which she lost her position due to a collision; however, she managed to recover and improve on the outside in the final turn. Although she was very wide back then, it didn’t cost her much energy as she subsequently rallied forward together with Joy’s Rocket (24-1), with who she battled for the victory.

At first, it was the latter who looked a bit better, trying heartily to hold off Caramel Swirl, but the Godolphin filly diminished the gap considerably, and it was up to the photo to decide who won. The call then announced Caramel Swirl was the more successful one, scoring her first Grade victory by a head in 1m 23.42s. Another three-year-old contestant, Joy’s Rocket, didn’t belong among the leading chances here as she hasn’t won even at the Listed scene, too, but she seemed to be a lively outsider, which she confirmed when running a huge race here. The pace pressing G2 winner Cilla (103-10) couldn’t keep up with the finishing duo and settled for third place.

Like in the Sycamore Stakes, the favourites didn’t shine in the Raven Run S as well, given Shalimar Gardens (37-1) took fourth in front of considered Souper Sensational (19-5), while the leading chance Obligatory (13-5) didn’t handle the outside gate, spent the race at the rear of the field, and couldn’t gain much on the front in the final stretch.

The Sunday’s pinnacle at Keeneland also didn’t turn out best for the leading chances as the G3 turf race for three-year-olds and older fillies and mares saw a thrilling finish from which Summer In Saratoga (54-10) came on top. The purse of $150,000 attracted the field of 10 participants who clashed at the distance of a mile and a half, and even though the pace was adequate, in the end, the race belonged among those galloping at the rear of the field. However, it was Corey Lanerie aboard Summer In Saratoga who started improving the position of his mount at about the right time. As the field was turning for home, Summer In Saratoga was already far from being the last, running quite near the leader, in fact. Once the five-year-old mare then made some space for herself, she bolted forward and quickly gained a considerable advantage over her rivals.

Preferred Luck Money (19-10) also spent the race at the back, but unlike Summer In Saratoga, she had to run wide around the field, and despite the fact she displayed a fantastic turn-of-foot on the outside, she was just too late. Summar In Saratoga scored her first G3 victory for Joe Sharp by a half of a length in 2m 30.02s, with Luck Money running in second and Micheline (41-5) taking third.

The winning mare hasn’t shined at the G3 race last time out but had two Listed victories under her belt, so her triumph wasn’t as surprising; however, the performance of ex-European La Lune (13-5) was definitely below par. The five-year-old looked in trouble in the final turn already, upon which she wasn’t capable of impacting the race at all.