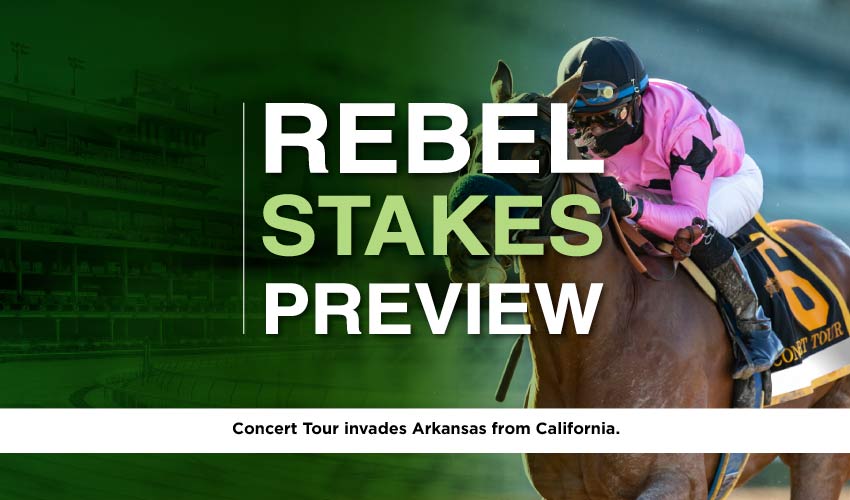 The highly-anticipated Rebel Stakes is set to take place on Saturday as Race 11 at Oaklawn Park. The 1 1/16-mile race is one of the major Kentucky Derby prep races, awarding points on a scale of 50-20-10-5 to the top four finishers.

The favorite coming into the Rebel Stakes is Concert Tour, trained by Hall of Famer Bob Baffert. The wet track could set the runner up to follow American Pharoah’s path to the Kentucky Derby. The 2015 Triple Crown champion used the Rebel Stakes as a springboard to the Derby for Baffert.

Concert Tour is coming to Arkansas from California for Baffert, and the Street Sense colt owned by Gary and Mary West is two-for-two with career earnings of $156,600.

He is coming off a victory in the Feb. 6 San Vicente Stakes (G2) at Santa Anita, where he registered a 106 Speed Figure. His debut race was a Jan. 15 maiden special weight victory at the track.

The Rebel Stakes will be Concert Tour’s first run over seven furlongs. He just put in a bullet 1:11/4 workout at Santa Anita on Saturday.

He will be joined by jockey Joel Rosario as the pair break from post 7.

Another one of the top entrants in the Rebel Stakes is Caddo River, who is also one of the names on the 2021 Road to the Derby leaderboard. The Hard Spun colt is trained by Eclipse Award winner Brad Cox and owned by Shortleaf Stable.

The runner will likely be the pacesetter in the event, drawing the rail post. According to Cox, he is not concerned about the post drawing since the horse breaks quickly from the gate.

Caddo River scored a 10-length victory in the Smarty Jones Stakes at one mile on Jan. 22 at Oaklawn Park. He has a career record of 2-2-0 from four starts and earnings of $166,092.

Florent Geroux will once again be the rider for the colt at the Rebel Stakes. The jockey is two-for-two aboard the runner, winning the races by a combined length of 19 1/2 lengths.

Baffert is also sending in the maiden winner Hozier, who will come in at longer odds. The Pioneerof the Nile colt scored a maiden race at Santa Anita, going 1 1/16 miles in February.

Hozier will break from post 3 in the Rebel Stakes under rider Martin Garcia.

Keepmeinmind will be making his first start since November. The runner won the Kentucky Jockey Club (G2) at Churchill Downs during Thanksgiving weekend. Trained by Robertino Diodor, he will break from post 6 under regular rider David Cohen.

Get Her Number is coming off an even longer break, with the colt’s last race coming back on Sept. 26. The runner won the American Pharoah Stakes at Santa Anita.

Make sure to check Horse Racing Tote for all the latest news on the Kentucky Derby Prep Races and odds; weekend graded stakes recap and results. Follow us on Social Media for Horse Racing Tote instant updates!