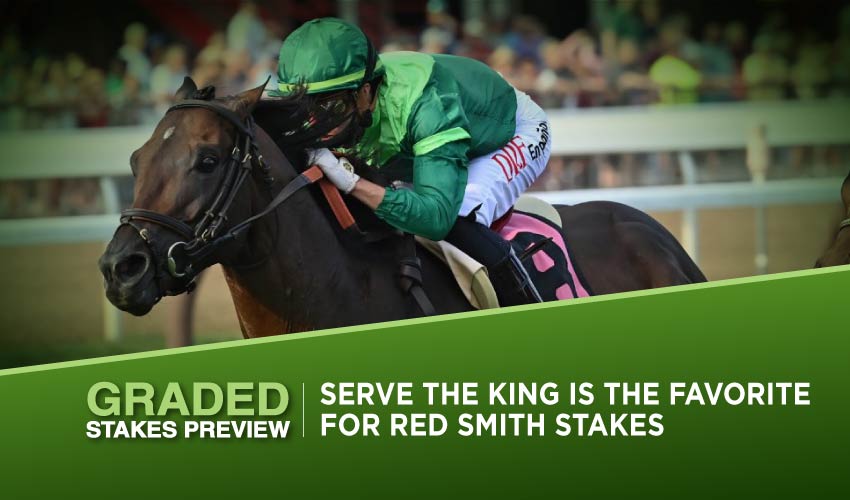 Aqueduct doesn’t have the glamour of its NYRA partners Saratoga and Belmont Park, but there’s plenty to look forward to at the ‘Big A’ this weekend, with Saturday’s Grade 2 Red Smith S full of talented turf distance runners, and Sunday’s two state-bred juvenile contests bringing together a host of last-time-out winners.

The curtain comes down on the New York turf season at Aqueduct on Saturday with the Red Smith, named after the great sportswriter, who spent many a happy afternoon at the ‘Big A’ and would have relished the puzzle of unearthing the winner from this closely contested field.

The pace angle will be old favourite Channel Cat, who has been on the scene a long time without having a great deal to show for it. He did win the Grade 1 Man o’War at Belmont Park over this distance in May, but it wasn’t a strong contest and it was his only victory in his last 13 starts. He’s been off the board in three since then, but perhaps the addition of blinkers may rekindle the spark.

Behind him in the Man o’War but ahead of him in the Grade 2 Bowling Green at Saratoga was Shamrocket, whose last-time-out win over a mile and a half at Belmont was his first ever in stakes company. He’s in form but doesn’t have any pace, as his frustrating record of 13 second/thirds in 20 races illustrates, while his barnmate No Word has been struggling, on a six-race losing streak with second spot in a very poor Grade 2 Bernard Baruch at Saratoga the only glimmer.

Chad Brown will always be strong in this type of race, and his dual entry is headed by Saratoga stakes winner Serve The King, who outran his odds when runner-up to stablemate Rockemperor in the Grade 1 Joe Hirsch at Belmont last month. This looks a little easier and he is one of the few here on the upgrade; barnmate Value Engineering has hit the board in all 11 starts but has never run in stakes company, and his last-time-out score in an allowance optional claimer at Belmont doesn’t sell him at this level – a comment that can also be applied perfectly to Price Talk.

The only three-year-old in the field is Soldier Rising, whose form when runner-up to State Of Rest (subsequent Australian G1 winner) in the Grade 1 Saratoga Derby, and when runner-up to Breeders’ Cup Turf winner Yibir in the Jockey Club Derby at Belmont, is good enough to win this. Last time out, though, he threw in an absolute clunker as favourite in the Grade 2 Hill Prince at Belmont, never in the game at all; nevertheless, there is a big race in him somewhere.

The extended distance should suit Corelli, winner of the Grade 3 Singspiel at Woodbine and a late-closing grinder without a kick, while strong stayer Tide Of The Sea could be a pace factor but so far hasn’t shown he can make that stick at this level.

There are reasons to doubt practically the whole field in the Red Smith S ,but if reproducing his best form SOLDIER RISING could well have the class to see off his elders

Five of the six runners in the Notebook, the feature of Sunday’s card at Aqueduct, are last-time-out winners. Foremost among them is Senbei, who is three-for-four and justified his odds-on billing when running away with a stakes at Finger Lakes last time out, drawing off to win by four lengths with Daufuskie Island more than three lengths further back in third place. He’ll be happy on the pace and stays further than this distance, as he showed when going gate-to-wire in a Saratoga stakes on his second start.

Other pace angles could be Kenner , who led at every call when finally getting the job done at the fourth attempt, keeping on gamely to win a Belmont maiden over this distance, and Bali’s Shade, who also wired the field to win a Belmont maiden over this distance on his second start. Fellow ‘Big Sandy’ maiden winner Cool Laoban also hit the jackpot on his second start, getting up in the last few jumps, and is entitled to move up a little off the back of that.

The fourth Belmont maiden winner in the field is Bustin Pietre, who took the race apart on his debut, winning by more than five lengths, but it was only a claimer and he must step up against much stiffer opposition.

Four Belmont maiden winners bid to move up in the Notebook, but they have a tough task against SENBEI, a dual stakes scorer and an obvious choice for a third such win.

There is more stakes form to work with in the Key Cents than in the Notebook with several of the fillies having already shown strong credentials, lending a little class to the unglamorous surroundings of the track in the shadow of JFK airport.

The unbeaten Classy Edition drew right away through the stretch to win a Belmont stakes by eight lengths, although that was over seven furlongs and the pace will be hotter here. However, the strength of the form was underlined when third-placed Shesawildjoker – beaten 14 lengths – came out next time and won a stakes at Finger Lakes by two and a quarter lengths from Tosconova Beauty.

Monmouth Park stakes winner Miss Alacrity is two-for-three, dropping her unbeaten record last time out in a stakes at Santa Anita, and now reverts to dirt after two starts on turf – she was a ten-length winner of a Belmont maiden on the main track on her debut.

Another coming back to the main track is Makin My Move, who thrashed Silver Fist

by more than 12 lengths on her debut at Saratoga before finishing fourth in the Grade 3 Matron on turf at Belmont, beaten only a length and a half. She only faded late there and that performance reads well in this company.

Cupid’s Heart was strong at the finish when a four-length winner of a Belmont maiden on her debut, and although several of her rivals have superior form she should not be ignored.

Is a competitive heat with plenty having shown strong form, but CLASSY EDITION was very impressive last time and can maintain her unbeaten record.