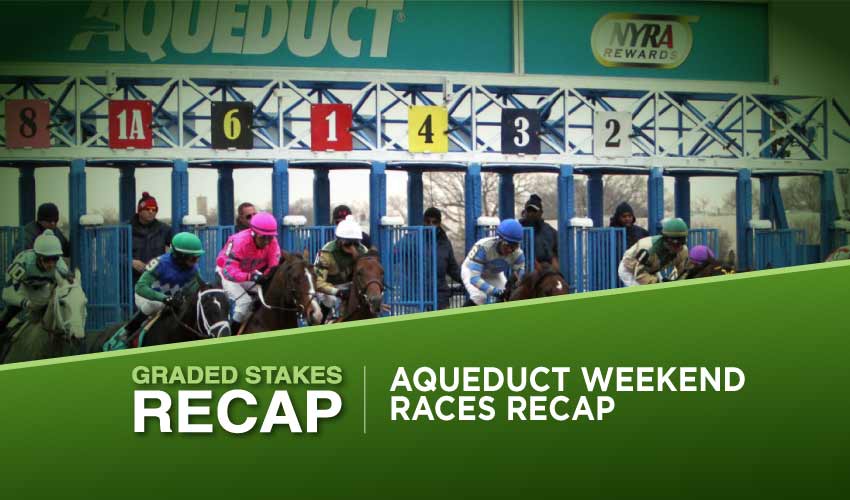 There was something for everyone at Aqueduct, New York’s winter playground, this weekend. Two speedy two-year-olds posted impressive performances in the Key Cents on Sunday, and there was a gutsy display over distance on turf from Serve The King in Saturday’s feature Grade 2 Red Smith.

King serves it up

It was probably inevitable that Chad Brown, who is such a force in turf racing, should land the spoils in New York’s final Graded turf stakes of the year, the Red Smith at Aqueduct on Saturday.

It helped that Brown had the 2-1 favourite in Serve The King, but the outcome was in doubt all the way up the stretch as the game front-runner Channel Cat clung on to the lead. It wasn’t until the final half-furlong that Irad Ortiz drove Serve The King to the lead, and when the camera clicked he was a neck ahead, stopping the clock in 2:16 and three-fifths and recording his first victory at Graded level. Soldier Rising rallied from the back of the pack for third, another neck back in a blanket finish.

“I had a really good trip. He put me in a good position, so I saved ground the whole race,” said Ortiz. “When I started moving he responded really well, I was able to tip him out and when he got clear, he was running.”

Serve The King, runner-up in the Grade 1 Joe Hirsch Turf Classic on his previous start, was taking his lifetime record to five-for-11, and Brown – winning his third Red Smith – expects his five-year-old to race on next year.

So easy for Senbei

The talented Senbei turned the Notebook, the highlight of Sunday’s card at Aqueduct, into a procession, adding to his haul of stakes races with an all-the-way romp against four overmatched rivals.

The heavy favourite, ridden by Manny Franco, drew off from the top of the lane to beat Bustin Pietre by eight and a quarter lengths, with Daufuskie Island another half-length back in third. Senbei covered the distance in 1:11 and one-half and paid off at $2.50, winning his third stakes and taking his record to four-for-five.

“He’ll have a break now,” said trainer Christophe Clement. “He’s a fast horse. It will be interesting to see if he can come back next year and stretch his speed a little.”

Edition much too classy

There was another impressive performance in the Key Cents, the fillies’ equivalent on Sunday, when the Todd Pletcher-trained Classy Edition stretched her unbeaten streak to three with a dominant display.

Irad Ortiz let the opposition do the dirty work before bringing Classy Edition five wide on the turn and moving smoothly to the lead, whereupon she drew off to win by three and a half lengths from longshot Captainsdaughter, with Shesawildjoker a neck away in third. The winner paid out at $3.90, in a time of 1:12 and one-fifth.

“She probably wants to go a little further, but she just kept coming,” said Ortiz. “At the quarter-pole, she went by and she kept going. She’s a nice filly.”

Sign up and get a 10% rebate. Make sure to stay tuned for the latest Horse racing odds, Kentucky Derby Future Book and racing entries

Follow us on Social Media for instant Key Cents updates!