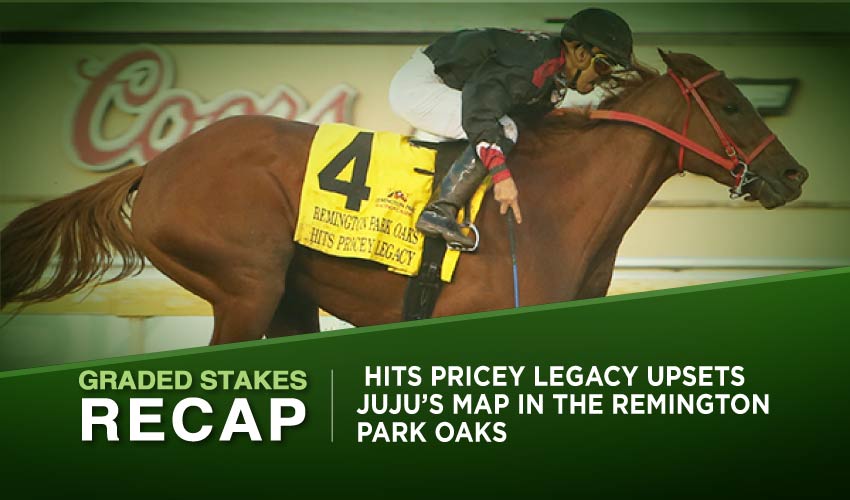 On Sunday, a couple of races for three-year-olds were held at Remington Park, where the favorites didn’t have their luckiest days. In the G3 Remington Park Oaks, Hits Pricey Legace stormed home to grab the victory, while preferred Juju’s Map managed only third, upon which Best Actor was disappointing in the G3 Oklahoma Derby. He also finished only third as Rattle N Roll enjoyed his second Graded triumph.

The victorious daughter of Den’s Legacy headed into Sunday’s event with six starts under her belt, including two black-type wins; therefore, she wasn’t entirely disrespected for the Remington Park Oaks. Still, Hits Pricey Legacy delivered an eye-catching performance as she galloped in fifth; however, her finish in the final turn and also the final stretch was simply amazing, resulting in her premiere Graded success. Free Like A Girl ran another solid race here when bettering the rest of the field, topped by Juju’s Map, who once again failed to sustain the pace she had set.

Three-year-old colts lined up for this G3 dirt race, offering the purse of $400,000. The field of eight participants covered the distance of a mile and a furlong, while the Oklahoma Derby also didn’t see a victory of the favorite because Best Actor (2-1) didn’t draw on his previous performances and managed only third. The real star of the event was Rattle N Roll (7-5), trained by Kenneth McPeek as the chestnut galloped in the last, as usual, but improved his position in time. Under Brian Hernandez, he was literally flying on the outside in the final turn, smoothly seized the front, and in the end, he held off finishing King Ottoman (113—10). Rattle N Roll triumphed in 1m 49.50s, leaving King Ottoman in second by one and ½ of a length.

Rattle N Roll has been having quite a rollercoaster-like career as he scored the G1 Breeders’ Claiborne Futurity in 2021 but hasn’t repeated such a performance among the elite. Still, he’s been showing his class is enough to be a solid G3 horse, which he finally proved to be true. After he managed to win only two black-type races and place in the G3 Matt Winn Stakes, he sort of deserved the victory, which was a very gutsy one. He bettered brave King Ottoman with enthusiasm, while the rest of the field was no match for them, including hot favorite Best Actor who turned for home utterly empty.