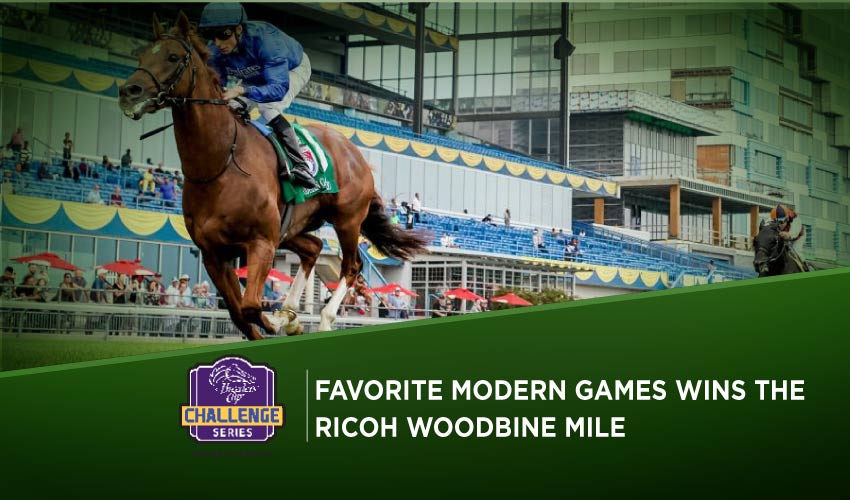 Blue was the color at Woodbine on Saturday, as owner Godolphin, trainer Charlie Appleby and jockey William Buick combined to win two of the three G1 contests during the afternoon – the Breeders’ Cup now beckons for dominant Ricoh Woodbine Mile winner Modern Games and for impressive Summer winner Mysterious Night. The Natalma was kept at home thanks to the local longshot Last Call, who was breaking her maiden on her first start at G1 level.

No-one made a lot of money, but at least bets were allowed on the 3-5 favorite Modern Games, who booked his spot at the Breeders’ Cup with a bravura display in the Woodbine Mile at the Toronto track on Saturday.

On his last appearance in North America, in last year’s Breeders’ Cup Juvenile Turf, Modern Games ran only for purse money after being withdrawn by track veterinarians, then reinstated minutes before the gates opened. This time things were much more straightforward, the Charlie Appleby-trained three-year-old utterly dominant over his older rivals, moving to the lead at the three-sixteenths pole and drawing right off to win eased down by five and a quarter length.

The second-choice Ivar rallied gamely to take second spot close home, pushing out the other British raider Finest Sound by a neck. The time was a fast 1:32 and four-fifths, and Modern Games’ Beyer speed figure of 112 is the highest achieved on turf in the US this year.

“He’s a very fast horse,” said rider William Buick, who will be a champion jockey in Britain this year. “As you saw there, when he changes gears he’s got a lot of speed, and he’s bigger and stronger this year.
“He was very comfortable throughout. I just had to figure out a route, really. But I had plenty of horse, and he was brave when he had to be.”

The only horse ever to beat Modern Games at a mile is the world’s best turf runner Baaeed, and this victory earned him a paid berth into the Breeders’ Cup Mile at Keeneland on November 5, for which he is sure to be a morning-line favorite. It was the third G1 score for the son of Dubawi following that Breeders’ Cup Juvenile Turf and the Poule d’Essai des Poulains at Longchamp in May and took his resume to six-for-11. He was also third in the ten-furlong G1 Prix du Jockey-Club (French Derby) at Chantilly.

It was a remarkable day for the colt’s ownership group Godolphin, even by their rigorously high standards. They signed for 13 winners in all, in Britain, Australia, Japan, the US, and Canada.

Godolphin, Charlie Appleby, and William Buick had earlier added to their vast global haul of G1 races when Mysterious Night romped in the Summer, booking a free pass into the Breeders’ Cup Juvenile Turf at Keeneland on November 4.

The brother to dual US G1 winner Althiqa was expected to win, going off as a 1-2 favorite, but the manner of his victory was still a surprise, representing a big step up on his good European form.

He traveled easily throughout, getting a dream run up the rail behind the pace-setter Ninetyfour Expos before being tipped out at the top of the lane and quickening clear to win unchallenged.

Mysterious Night was five and three-quarter lengths clear at the line and value for more, stopping the clock in a tick under 1:35. Second-choice Appraise was a length and a quarter ahead of Philip My Dear, the third-choice and leading local hope.

“We knew he’d like the fast ground,” said Buick. “He traveled beautifully, I had a lot of confidence in him – it was perfect and I think he can go on from here.”

Mysterious Night has a speedy pedigree and this was the first time he had stretched out to a mile, and also his first start at the top level. He is now three-for-six, including a victory in the G3 Prix Francois Boutin at Deauville, and has never missed the board.

He will now return home to Newmarket, along with Saturday’s other G1 winners Modern Games and Nations Pride, and although Appleby has higher-ranked two-year-olds in his yard it is highly likely that Mysterious Night will be his chief representative in the BC Juvenile Turf, a race he won last year with Modern Games.

There were no European representatives in the Natalma, which provided an upset as 21-1 chance Last Call shed her maiden credentials at the third attempt with a straightforward, no-fluke victory.

The daughter of English Channel was the rank outsider of the entire field and the third-string of trainer Kevin Attard, but she perked up considerably for the removal of blinkers and rated nicely, staying well away from the pace set by Star Candy until moving up around the turn.

Last Call came four wide into the lane and was soon on the lead, showing plenty of tenacity under a drive from Rafael Hernandez to stay ahead of the posse and win by a length in a time of 1:36 and one-half. The favorite Cairo Consort rallied to be runner-up, three-quarters of a length ahead of the late-closing third-choice G Laurie.

“Taking off the blinkers was an integral part of today’s win,” said Attard, who was winning the Natalma for the first time. “In her last race she was pretty rank early and was burning too much energy, and when it was time to go there wasn’t much left in the tank.

“Now that she has more experience, we decided to take the blinkers off. We tucked her in behind horses and she handled it all well.”

Last Call’s transformation was preceded by two defeats in maiden company at Woodbine, but this success earned her a paid berth into the Breeders’ Cup Juvenile Fillies Turf at Keeneland on November 4, and Attard – who has yet to have a winner at racing’s world championships – is pointing her that way.