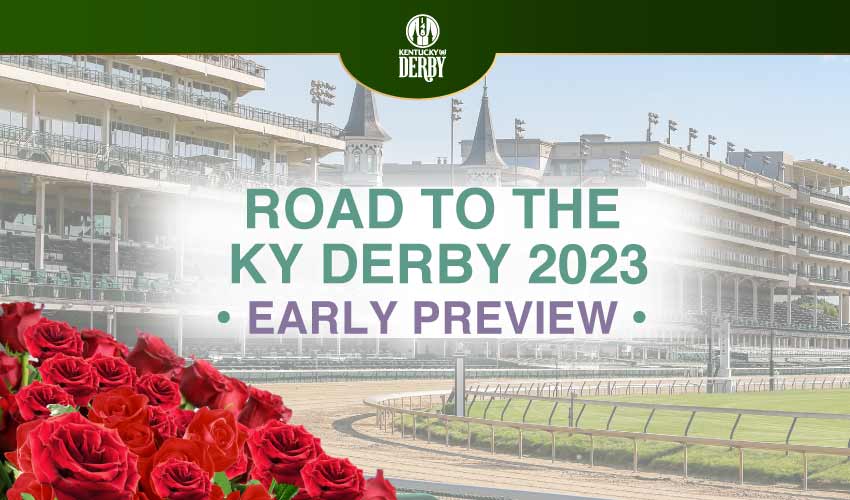 The long and winding Road to the Ky Derby 2023 passed another milestone last weekend, when the G2 Kentucky Jockey Club at Churchill Downs pushed another name into the conversation. In our latest look at the 2023 Derby picture we put the prospects of Instant Coffee under the microscope, as well as those of the dazzling filly Hoosier Philly and some early west-coast contenders.

The most recent winner on the ‘Road to the Kentucky Derby’ did not make a huge impact on the future book, with Instant Coffee receiving only so-so reviews for his gutsy victory in last Saturday’s G2 Kentucky Jockey Club at Churchill Downs.

He didn’t capture the imagination because we’re drawn to flashy performances based upon sizzling speed, whereas Instant Coffee just ground it out off a dawdling pace, winning in comfort and demonstrating his fair share of stamina ahead of a blanket finish for the board places, which often signifies that there’s no stand-out among them.

But we shouldn’t be too hard on him, as it was only Instant Coffee’s third start and he runs for the same connections as dual G1 winner Cyberknife, so his path towards the Derby is already established. Trainer Brad Cox was pleased, as you’d expect, so Instant Coffee should stay on the short-list.

Runner-up Curly Jack has had a busy time at two – as many starts as Flightline made in his life – and doesn’t appeal as a Derby horse, although his effort when fifth in the G1 Breeders’ Cup Juvenile behind future-book favourites Forte and Cave Rock helps to tie several of these early strands together.

There was more noise made about the hugely impressive victory of Hoosier Philly in the G2 Golden Rod on the same Churchill Downs card, in a faster time than Instant Coffee, and there’s no doubt that the filly is a star in the making. Conversation regarding the Derby is premature, though, and at this stage she should simply be viewed as a leading contender – arguably the top contender – for the Kentucky Oaks. The last filly to win the Derby was Winning Colors in 1988, and only three have ever done so.

One of the big recent movers in the future book is Havnameltdown, winner of the G3 Bob Hope from Newgate at Del Mar ten days ago. He won well enough, but like so many potential contenders for the Derby (including Newgate) he is trained by Bob Baffert, and will have to switch stables before he can even begin to earn necessary RTKD points.

Fellow west-coaster Spun Intended makes his first appearance in the future book after breaking his maiden in a sprint at Del Mar last weekend, romping by six and a half lengths. On his debut he was beaten a half-length by fellow debutant Fort Warren (also trained by Baffert), and both horses should go into the notebook ahead of a more testing assignment.

The next RTKD qualifying race is the G2 Remsen over a mile-eighth at Aqueduct on Saturday, which offers points to the first five home on a 10-4-3-2-1 basis. Last year’s Remsen was won by G1 Belmont winner Mo Donegal from G1 Kentucky Derby third Zandon, so it can be an influential race

Stay tuned for the latest Kentucky Derby Odds. Check out the Road to the Ky Derby Entries and don’t forget to Sign-up and get up to a 10% horse rebate. We offer the best horse rebate, in the Industry!

Follow us on Social Media for more Road to the Ky Derby 2023 updates!