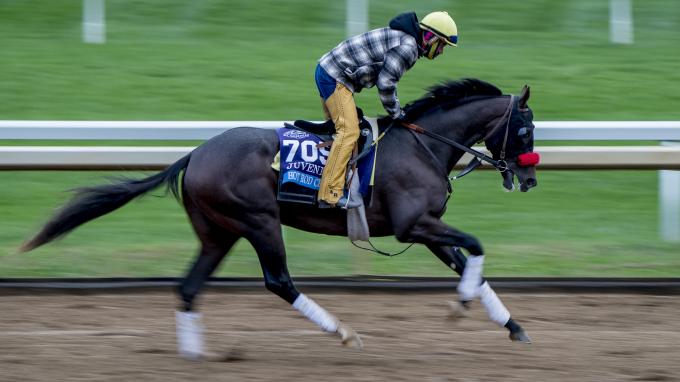 The Grade III, $100,000 Robert B Lewis Stakes is the highlight race on Santa Anita’s Saturday race card. It is open to 3-year-olds and covers 1 1/16 miles, and it is a Kentucky Derby prep race.

The winner receives 10 qualifying Derby points, with the second-place finisher receiving four, two points going to the third horse, and one to the fourth.

The favorite coming into this one will likely be Medina Spirit, who has a career record of 1-1-0 from two starts and earnings of $45,200. He is trained by Hall of Famer Bob Baffert, who is consistently one of the leading trainers going into the Derby.

Medina Spirit impressed many with his runner-up finish in the Sham Stakes (G3), where he lost to Life Is Good by 3/4 of a length after gaining on the leader towards the end. The final time for that effort was 1:36.63.

His second-place finish earned him a field-high 118 TimeformUS Speed Figure. If he can post that number again, he should have no problem defeating the field in the Robert B Lewis Stakes. Because Medina Spirit is trained by Baffert and is receiving a lot of attention, his price won’t be as good for bettors. However, it is warranted given the runner’s skill.

Medina Spirit will break from Post 1 under jockey Abel Cedillo.

There are two other top runners who will be challenging Median Spirit: Hot Rod Charlie and Spielberg.

Hot Rod Charlie, an Oxbow colt trained by Doug O’Neill, is 1-1-1 from five starts with earnings of $383,700. He finished second to Essential Quality in the Breeders’ Cup Juvenile. But he was not up against a high-quality field in that one.

Prior to that, he struggled to beat Parnelli in an Oct. 2 local maiden race. Parnelli will also be in the Robert B. Lewis. While he did post a 112 Speed Figure in that Breeders’ Cup Juvenile performance, there are many questions surrounding how he will perform against this field.

The other big name is Spielberg, who is Bob Baffert’s other entrant. He is 2-2-1 from six career starts with earnings of $257,200.

He took the Los Alamitos Futurity (G2) last time out, beating The Great One by a nose. Speilberg also broke his maiden by a neck over Parnelli at Del Mar, where he registered a 110 Speed Figure.

His other performances include a fourth-place run in the Bob Hope Stakes (G3) and third in the American Pharoah Stakes (G1).

Hot Rod Charlie will break from Post 4 under rider Joel Rosario, while Spielberg will have to overcome the outside Post 8 under Flavien Prat.

Make sure to check Horse Racing Tote for Racing Odds surrounding the Robert B. Lewis Stakes.