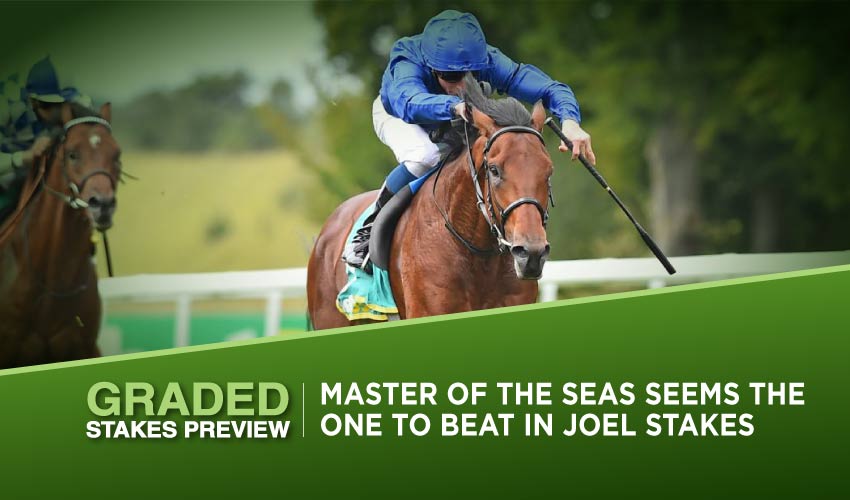 The high-quality European races continue this week at the Newmarket Racecourse, and even though the G1 events are going to be held on the weekend, Friday’s card offers a couple of exciting G2 races Joel Stakes and Rockfel S. At first, two-year-old fillies will clash at the distance of 7 furlongs where preferred Majestic Glory will face talented Girl On Film, and later on, Benbatl will try to land his second Joel Stakes. However, second from the 2000 Guineas Master of the Seas reappears after a pause here, while he seems to be the real favourite in this event.

This G2 turf race for two-year-old fillies attracted a field of 10 contestants. Run over the distance of 7 furlongs with the purse £90,000 up for grabs; the event has its favourite in Andrew Balding bound Majestic Glory (7-2). The Frankel bay achieved her first victory in a small race, but last time out, she headed among a G3 company, where she succeeded as well. Not only did she show her fighting ability, but Majestic Glory also managed to hold off Wild Beauty, who scored a G1 win in Canada last weekend. Therefore, her form is relatively solid here, and the only concern about the favourite regards the state of the ground as she didn’t finish among the first five only at her debut, which happened on good to soft.

The same conditions are expected for Friday’s card; however, Oscula (6-1), for example, shouldn’t be bothered by it. The George Boughey trained filly is a very experienced runner already, having run seven races and never finishing worse than fourth. She achieved her most significant victory in the G3 at Deauville, France, as she brilliantly handled the soft surface. Despite being a winner at the Grade scene, she doesn’t seem to be extraordinarily classy so that she could place once more, but there are at least two less skilled fillies who might prove better than Oscula.

Jumbly (9-2) has two starts under her belt, and even though she bagged neither of the two wins in a strong competition, she displayed a nice turn of foot last time out. She travelled sweetly, and once she was asked, Jumbly quickened up promptly in order to triumph easily. The question, of course, is whether she’s classy enough to shine among her Friday’s rivals; still, there was something about the ease she succeeded with. She shouldn’t be underestimated here. Girl on Film (9-2) has won her only outing; and while the Ralph Beckett filly might be green and look all legs, her performance was eye-catching.

She started the race in the back of the field but managed to unfold a fine finish in the final stage, seizing the victory in a sort of careful manner as if she wasn’t sure whether it was what the jockey really wanted her to do. Romantic Time (10-1) has already won a G3 race, but on a shorter distance and firmer ground, while Kawida (20-1) is another one to consider, given her easy victory in a maiden. The second filly was close to her, but with Kawida they literally demolished the rest.

Majestic Glory deserves her role as the favourite as Wild Beauty boosted her form significantly, but we think Girl On Film could be even better. Still, she might be too inexperienced to land this.

In this G2 event run over a mile, the blue colours of Godolphin could see another success as in cooperation with Charlie Appleby; their horses seem to be on fire. Bagging three G1 victories in Canada last weekend, they have two exciting participants in this turf event for three-year-old and older horses who will clash for the purse of £115,000. Charlie Appleby trains the main favourite Master of the Seas (11-8), who became a G2 winner as a two-year-old; thus, he was rather respected at the beginning of the 2021 Racing season.

At first, the Dubai bay placed second in a Listed race at Meydan, then fought hard to win a Classic Trial, and even though he was all heart in the 2000 Guineas, Master of the Seas just lost to classy and unbelievably tough Poetic Flare. Unfortunately, he hadn’t got a chance to turn the tables with him as he suffered a setback and hadn’t run since the 1st of May. The long pause might play its role; still, he is a hugely talented colt.

But he faces a big threat in another Godolphin bound horse – the seven-year-old Benbatl (10-3) trained by Saeed bin Suroor. This globetrotter has been boasting his class since 2017 when he finished fifth in the Epsom Derby, upon which he travelled the world to achieve G1 wins in Dubai, Munich, and Caulfield. He’s never really cared about the distance as he succeeded over a mile and a half, and in 2019, he also won the Joel Stakes.

Benbatl finished third in the last year’s editions as he showed up after a long hiatus followed by a third place in the Saudi Cup at Riyadh; however, he has run only once since then – in the Celebration Mile in August. In other words, the consistent horse needed another time off, but his last outing was fine, so he really should be the biggest rival to the favourite. Still, he doesn’t perform well on anything softer than good.

The rest of the field hasn’t shown a similar ability as the mentioned horses recently, so it’d be a huge surprise if any of them beats either Benbatl or Master of the Seas. Three-year-old Laneqash (13-2) has been lightly raced, though, so after two fine places in the Grade company, he should be the best of the rest, while Queen Supreme (18-1) is an outsider; still, we’re interested how this G1 winner in South Africa will perform here.

The couple of favourites had their issues, but both of them should be able to land this. Benbatl attempt to become the first horse to win the Joel Stakes for the second time, but we’ll side with Master of the Seas because he seems more apt to handle a bit softer ground.

Join us at jazzsports.ag/hrt and make sure to stay tuned for the latest fixed horse betting odds. and races entries.