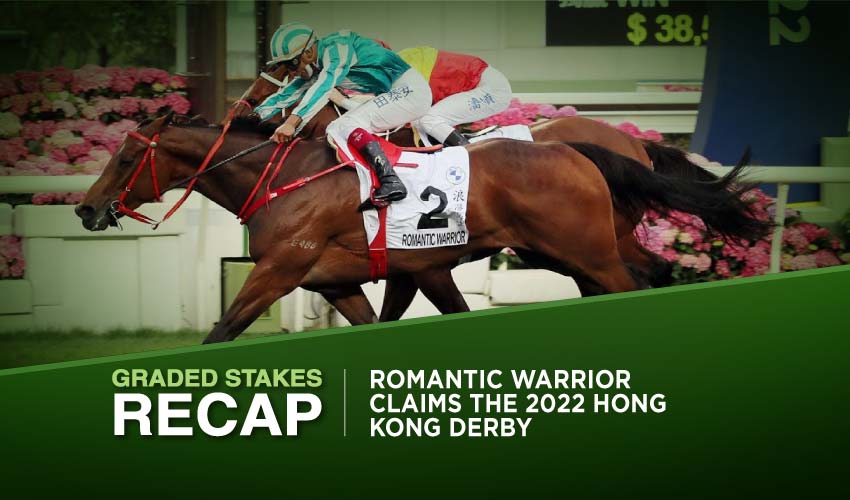 The $24,000,000 race was open only to four-year-old colts who clashed at the distance of a mile and a quarter on the turf surface.

The favourite California Spangle (7-5) had a great start and tried to score the event from to front; however, Romantic Warrior (11-4) delivered a fine finish the outside, and in the final stretch, he joined his rival in the first place. After a short fight, Romantic Warrior led by Karis Teetan prevailed by a head in 2m 0.23s, securing his sixth victory in seven outings. California Spangle had to settle to a second place with Money Catcher (34-1), the first one to threaten the leader in the closing stages, which ran in third.

The race unfolded favourably for the favourite as California Spangle managed to get to the front from an outside gate and set the pace. The winner of the Hong Kong Cup, where he bettered Romantic Warrior decisively, remained first for the vast majority of the race as only after turning for home Money Catcher challenged him and California Spangle had to fight him off.

Romantic Warrior had an alright gallop as well. The Danny Shum bound bay had a good start but then let quicker colts in front of himself, so he turned to the final stretch in seventh place from the outside. Still, the manoeuvre ensured he had enough space to rally, which he did outstandingly. The relatively small son of Acclamation closed on the fighting duo, upon which he prevailed over California Spangle and drew on his fine victory in the Hong Kong Classic Mile. Therefore, he scored two legs of the local Triple Crown, while his rival got the middle part.

Money Catcher also ran a good race, given his third place in the Hong Kong Classic Cup was seen as a bit of a fluke, yet his Sunday’s performance was very gutsy. Senor Toba (19-5), piloted by Joao Moreira, finished fourth in front of The Irishman (15-1), while the remaining piece of the purse belonged to Turin Redsun (7-1) in sixth.

Sign up and get a 10% rebate! Make sure to stay tuned for the latest Horse racing odds, and racing entries.