ROMBAUER LOOKS TOWARDS NEXT MOVE 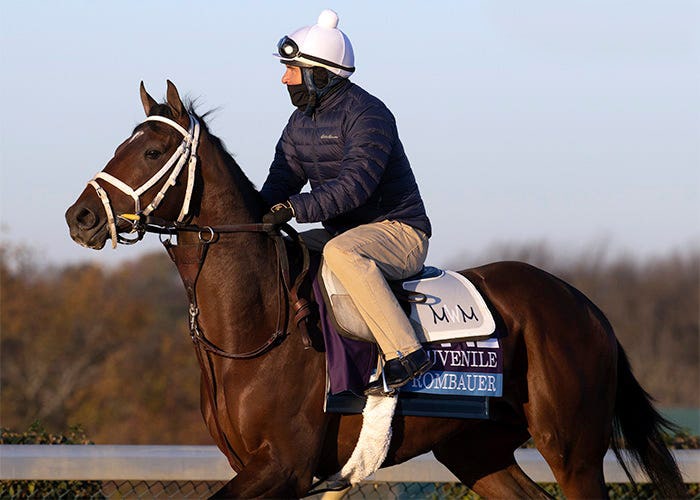 Rombauer looks towards the next race. Following his impressive victory in Saturday’s El Camino Real Derby, Rombauer trainer Michael McCarthy said all future race options were open for the runner.

He is now one of the top names leading up to the May 1 Kentucky Derby Presented by Woodford Reserve (G1).

The 3-year-old Twirling Candy colt is owned by John and Dianne Fradkin. He made his 3-year-old debut in the El Camino Real Derby, running on the Tapeta surface at Golden Gate Fields.

The runner moved forward from 11 1/2 lengths behind at the half-mile pole, eventually taking the lead by a neck.

Rombauer came into the nine-furlong race as the 6-5 favorite.

“The horse is still up in San Francisco,” McCarthy said. “We’ll kind of give him a few days to get his feet underneath him and formulate a game plan the next week or two. There are a lot of options out there right now; they’re all in play.”

Rombauer Looks Towards Making Up Ground

Rombauer often runs up from the back of the field, as he demonstrated in his last four races. In each one of those outings, he closed in at the head of the stretch.

McCarthy wasn’t sure if Rombauer could still win as he watched him fall nine lengths behind going into the stretch.

“He was a little farther back than I would have liked,” McCarthy said. “But I did not want to get hung wide into the first turn and have him run a mile and quarter in February instead of a mile and an eighth.

“The plan was always to try and save ground into the first turn. We did that and may have sacrificed a few lengths in doing so, but the horse seemed to find his stride coming through the lane.

“It was good enough to get up. I knew a mile and an eighth would not be an issue with him.”

With the El Camino Real Derby win, Rombauer was awarded 10 qualifying points for the Kentucky Derby. The win also provided him with an all-expenses-paid berth into the Preakness Stakes (G1) on May 15, which is the second leg of the Triple Crown series.

McCarthy also won the 2018 edition of the El Camino Real Derby with the filly Paved.

The trainer will get a shot at his first Kentucky Derby if Rombauer does make it into the race. While he has never trained a horse among the Derby field, he did play a role with several horses running in the race as he was an assistant to Hall of Fame trainer Todd Pletcher.

Rombauer’s base at Santa Anita holds many of this year’s Triple Crown prospects. Those include names like Hall of Fame trainer Bob Baffert’s Life Is Good, Freedom Fighter, Medina Spirit, and Concert Tour. Some other big names include Peter Eurton’s Dream Shake, Doug O’Neill’s Hot Rod Charlie and The Great One, and Simon Callaghan’s Roman Centurian.