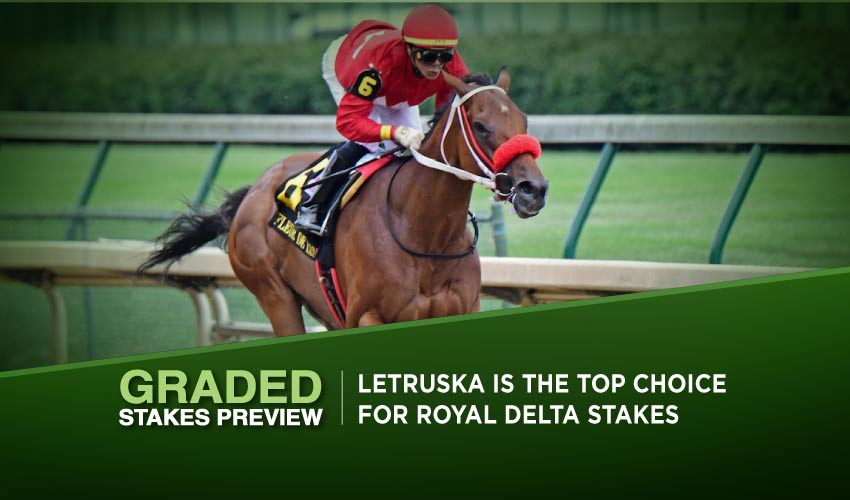 Saturday’s card at the Gulfstream Park features a very intriguing G3 race, the Royal Delta Stakes, where a star among mares aims to stretch her legs for the very first time in 2022 – Letruska. Last year, the brilliant mare scored four G1 races, and if she recovered from the flop in the Breeders’ Cup Distaff, she should prove to be the best in the field here.

The $150,000 race welcomes a field of seven four-year-old fillies and older mares who will cover the distance of a mile and a half of a furlong. Although this G3 dirt event hasn’t attracted victors of big stardom recently, Fausto Gutierrez chose it as a starting point for his stable-star, Letruska.

The six-year-old mare emerged from Mexico to show she’s capable of running well among the US elite, and in 2021, Letruska scored five Graded races in a row, including four G1 events. Most recently, she bagged the G1 Spinster Stakes in October, after which she was disappointing in the Breeders’ Cup Distaff, where it initially looked like she should’ve won it easily.

Still, even champions have their lows, so commencing the new season, Letruska is respected for the Royal Delta Stakes, given she’s obviously recorded the most successes of all the participants.

Of course, the daughter of Super Saver carries the biggest weight; still, she should fight for the win, at least here.

Regarding her rivals, Crazy Beautiful looks the most interesting one. The Kenneth McPeek bound grey filly even placed second in the G1 race in 2020 but settled mainly at the G2 scene, where she achieved two victories in 2021, the Gulfstream Park Oaks and Summertime Oaks.

It could be said her form deteriorated throughout the season as she wasn’t able to succeed among G3 company in autumn; still, she either was very close to winning and remained just denied, or she carried considerably more than the rivals who bettered her.

The four-year-old daughter of Liam’s Map should enjoy both the distance and the track at the Gulfstream Park; moreover, she carries less than Letruska.

Five-year-old Key Biscayne finished fifth in the G1 Belmont Oaks Invitational Stakes but looks to be a good mare for the black-type scene at best, which applies to some other participants including Il Malocchio. She usually competes in Kanada, but after her US efforts, she might be the one snatching third place here.

Our betting pick for the Royal Delta Stakes is:

Letruska is as good as she was in most of the 2021 season, she should be in a league of her own here. Still, we kind of like the consistency and diligence Crazy Beautiful delivers.

Sign up to get our daily horse racing news and become a winner. Check more information about Horse racing odds, racing entries, and races results.