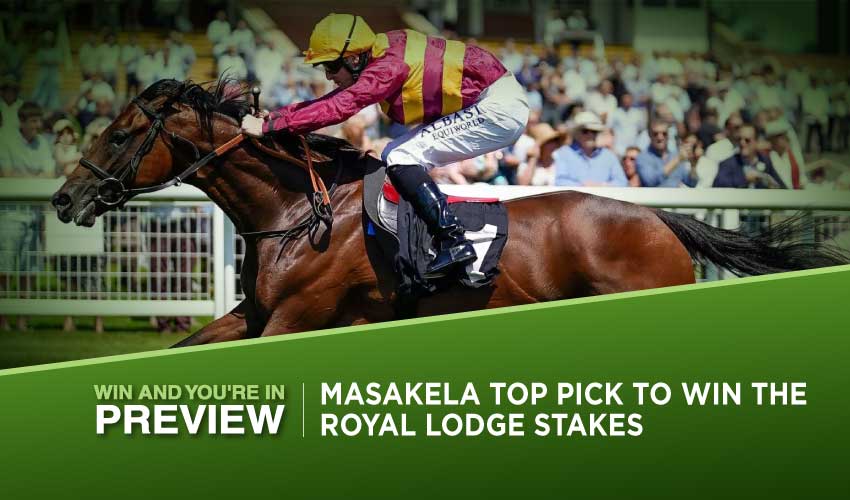 A weekend of excellent action continues in Europe on Saturday. While Royal Lodge Stakes is open only to two-year-old colts and geldings, among which gutsy Masekela should bag another Grade victory. Cheveley Park Stakes promises a challenging task among fillies for preferred Sacred Bridge, the Middle Park Stakes could be the race where Perfect Power cements his position as an exciting youngster. Asymmetric and Dr Zempf might be against.

The first race for two-year-olds we’re about to cover is a G2 turf event with the purse of £100,000 where the youngsters will face the distance of a mile at Royal Lodge Stakes . It’s restricted only to colts and geldings, among which Masekela (2-1) trained by Andrew Balding is the leading chance. He’s raced four times so far, bagging two victories and a fine second place in the Superlative Stakes, where he just lost only to stunning Native Trail. Last time out, Masekela simply had to lead the pack in the Listed over 7 furlongs, and even though the colt obviously isn’t a front-runner, he transformed the effort into a tight win by a head.

The bay is quite a gutsy specimen, so anyone challenging him has a tough task ahead, such as the Godolphin bound colt Coroebus (5-2). Preferred in his debut, the massive bay’s finish wasn’t an explosive one, but he got the job done and should benefit from the experience; moreover, Charlie Appleby’s charges have such a form throughout the season that respecting Coroebus is a must.

Royal Patronage (10-3) is another to consider due to his exploits at Epsom and York. At his third start, the bay trained by Mark Johnston demolished his rivals in a nursery, upon which he romped for the victory in the G3 Acomb Stakes over 7 furlongs. He should handle the longer distance well, and scoring at the G3 level didn’t seem like everything Royal Patronage can do. Oneforthegutter (14-1) hasn’t displayed such a class yet, finishing only fourth in Listed and then second at the G3 level.

But he tried hard last time at Deauville, and closing on the leader, he might’ve been only then figuring out that sometimes it’s necessary to dig deep to win. The performance was definitely a promising one. Let’s see how it goes at Royal Lodge Stakes.

The last duo to talk about arrives from Ireland. Aidan O’Brien sends in Howth (14-1), who’s about to have his seventh start, and even though his results resemble a ride on a rollercoaster, his last effort in the G2 Champions Juvenile Stakes at Leopardstown was quite lovely. Galloping in the midfield, he managed to navigate through his rivals in time and reach a free spot at the barrier, upon which he fought for the win with three of his opponents. He lost to all of them, still, he was fourth only by half a length to winning Atomic Jones. Donnacha O’Brien relies on Unconquerable (22-1), who looks like a decent but quite green colt.

We’ll stick with Masakela here as he’s experienced and classy, while Coroebus might need another start or two to strike at such a level. We also like Oneforthegutter a lot.

The purse of £250,000 attracted a field of 13 two-year-old fillies who are to clash at the distance of 6 furlongs. At first sight, this G1 turf race is a mouth-watering event as it has everything – a hot favourite, some classy rivals who could outrun her, and also many other contestants who seem promising enough to cause an upset here. In other words, Sacred Bridge (15-8) trained by Ger Lyon is the most preferred filly here; however, other eight or nine fillies could have a say in this race as well, especially if they progressed significantly since their last outings.

Still, Sacred Bridge is a justified favourite due to her unbeaten record. She’s won all of her four starts, including an easy success in a G3 company at Curragh. Sacred Bridge was hugely impressive back then, travelling smoothly and picking it up when asked; she drew clear from her rivals. If she delivers a similar performance on Saturday, other Grade winners would need to progress to leave Sacred Bridge behind. Zain Claudette (5-1) seems to pose the biggest threat for the preferred filly given she’s a G2 winner; moreover, she managed to hold off favourite Sandrine (5-1) back then.

Upon showing a fine turn of foot, Zain Claudette, trained by Ismail Mohammed, crossed the wire while looking still relatively fresh, suggesting she should handle the competition of even higher quality. It can’t be said Sandrine wasn’t a good rival to her; however, she might be pretty tired after her efforts at Royal Ascot and Newmarket.

The mentioned trio belongs among the most prominent two-year-old fillies in 2021; however, Velocidad (33-1) is a G2 winner, too, yet she was disappointing in the G1 Prix Morny. Among fillies, she could fare better, but other classy contestants might  be better; for example, Eve Lodge (20-1) scored a G3 win after putting up a thrilling fight and holding off Wings of War, a fresh winner of the G2 Mill Reef Stakes. Flotus (11-1) had no luck when taking on Grade company during spring, but later on, she impressed thanks to her front-running effort in a Listed race at Ripon.

There are still doubts about her actual class, of course, yet she boasted such a form and enthusiasm that she couldn’t be overlooked. The last to mention here is Tenebrism (14-1) trained by Aidan O’Brien, who’s run just once, but at Naas, she looked like a professional racehorse that knows what this is all about. Clashing with skilled fillies like Sandrine or Sacred Bridge might be too tough on her, but she’s one watch for the future.

There are three outstanding fillies, among which Sacred Bridge will attempt to keep her unbeaten record, and even though we like Sandrine and Zain Claudette a lot, Sacred Bridge gets the vote. Tenebrism should run well, too, and earn some more money for Ireland here.

In this field of 10 two-year-olds, Perfect Power (2-1) is the favourite of the G1 turf race over 6 furlongs. With the purse of £250,000 up for grabs, the preferred bay trained by Richard Foley could provide the connection with another massive prize after he scored among the elite in the Prix Morny in France. Having won a G2 already, he was a bit underestimated at Deauville’s last time out, but it was justified as he finished only fifth before heading to France. Still, Perfect Power didn’t have a clear run back then, so once he could finally show his ability, he did so and achieved his first G1 victory, leaving Asymmetric (15-2) in third and Armor (9-1) in fourth.

Once again, the former should place in this event as the Alan King bound colt is a reliable one, never running below par. A G2 winner’s performance at Deauville was slightly hindered by a shortage of room, so if both Perfect Power and Asymmetric are given level field, the Middle Park Stakes should end in a thrilling finish.

Armor seemed smart after bagging a G3 victory; however, he might lack some class compared to the mentioned duo; moreover, he is more of a 5-furlong colt, which one may also say about Caturra (11-1). The Clive Cox trained colt bettered Armor last time out by a neck as they clashed at the distance of 5 furlongs but Caturra has a Listed win under his belt where he handled 6 furlongs quite well. Still, he needs to relax at the rear of the field and rely on his finish because, during his outing in a G2 company in July, he led the pack and tired himself out quickly.

Like Armor, some stipulations about his class are intact, while Dr Zempf (6-1) is also yet to show how good he can be. He definitely displayed some spark when running to second place in the G1 Phoenix Stakes, where brave Ebro River just fought him off. Moreover, it was only his third start. Being a bit more experienced now, Dr Zempf is expected to run well again, beating like Go Bears Go (8-1) and Castle Star (17-2) once more.

We’re eager to see whether Perfect Power cements his position as one of the best two-year-olds. On the one hand, we still have doubts about him; on the other one, he beat Asymmetric with ease last time out, and it seems there are only him and Dr Zempf who could threaten Perfect Power’s road for the second G1 win. Therefore, we’ll stick with the favourite, but won’t be surprised if he gets beaten.

Sign up and get a 10% rebate. Make sure to stay tuned for the Kentucky Derby Future Book, the latest Horse Racing Odds, and Races entries.