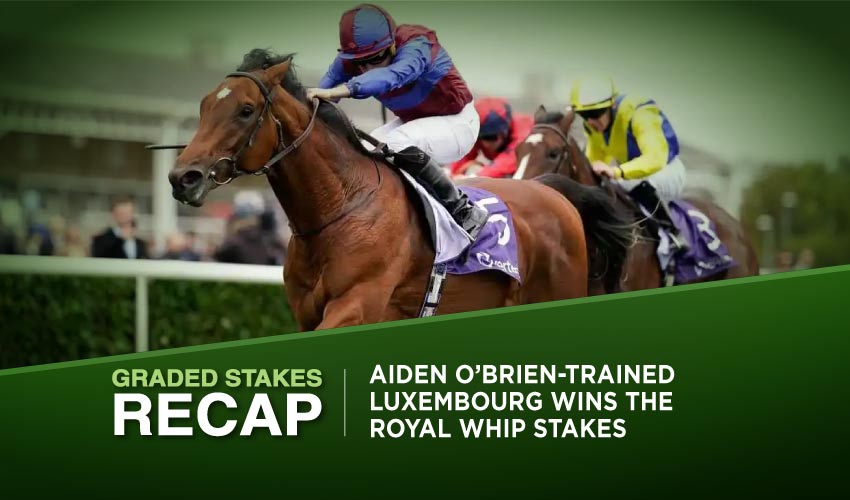 This past Saturday at the Curragh saw two Grade 3 races which saw some of Ireland’s premier trainers clash. Both the Royal Whip Stakes and Irish St Leger Trial were fantastic races, and we review the best of the action here.

What a race! The history books will say that this year’s Royal Whip Stakes was won by the Aiden O’Brien-trained Luxembourg, but it was so much closer than that.

A previous winner at the highest level, Luxembourg has just been beaten once in his career and the expectation was that this return to Grade 3 company would be a procession.

It turned out to be anything but.

Held up, Ryan Moore looked perfectly content to sit in mid-division. As the runners hit the three-furlong pole, Moore asked for more and the response wasn’t forthcoming.

Asking for everything that Luxembourg had, the horse rallied and in the dying strides in the lead up to the line stuck his nose in front to snatch victory by a head.

It would have been a run that left trainer Aiden O’Brien with mixed emotions. On the one hand, he would have been delighted by his horses’ battling quality, but with bigger tests to come it will be a concern he only just won this inferior race. It will be fascinating to see where Luxembourg ends up next.

Just six headed to post for this year’s race but the betting was tight. Just shading favoritism was the Joseph O’Brien-trained Raise You. He was closely followed by the Dermot Weld-trained Search For A Song.

Traveling like a well-fancied horse, Raise You was happy to be pulled along by the early pace-setter Seattle Creek but made his move four furlongs from home.

The aggressive move by Shane Crosse caught out several of his rivals and Chris Hayes upon Search For A Song tried to match Raise You’s move.

The move by Hayes would turn out to be vain. As the horses hit the two-furlong pole, it was clear that Raise You was the horse traveling much the better. Managing to find another gear, he powered clear of his rival at the furlong marker and ran out an easy and comfortable winner.

The top two had separated themselves out from the rest of the field, and despite finishing a distant second Search For A Song held on easily for second place.

Clearly, a horse going places, it will be fascinating to see how Raise You performs in the St Leger. He could stand a real chance.