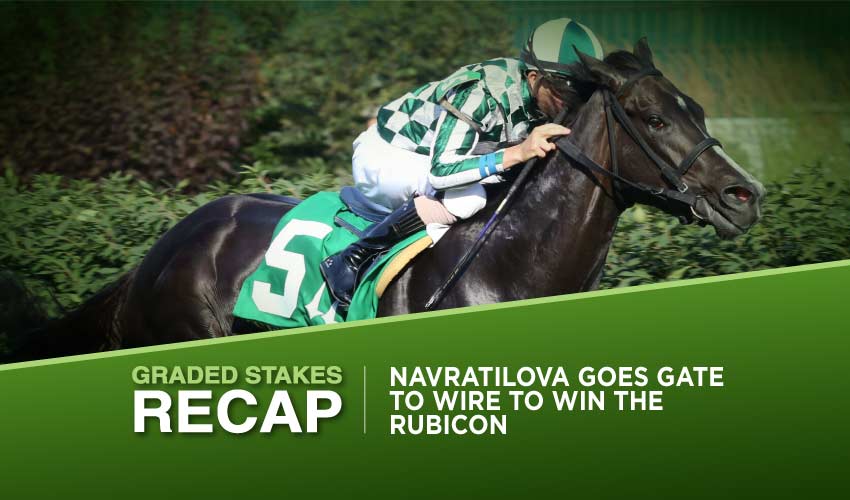 As the Keeneland fall comes to an end, the last graded races were run over the weekend. While the Rubicon saw a surprising victory of underestimated Navratilova, who held off preferred Crazy Beautiful, the Fayette Stakes for three-year-old and older horses meant a commanding win for Independence Hall, who ruled impressively over Code of Honor.

Three-year-old fillies competed for the purse of $150,000 in this G3 turf race, while the preferred participants had to settle for places as outsider Navratilova (26-1) managed to score her first Grade victory gate-to-wire. Unsuccessful in such a competition, George R Arnold II bound bay won at the black-type scene; however, she wasn’t expected to improve enough to play an impactful role in this mile and half of a furlong-long race, but Colby J Hernandez simply had everything under control since the start.

Navratilova broke away nicely, aimed for the front, and even though her rivals were trying to better her in the final stretch, the Medaglia d’Oro filly always found something more to hold them off. In the end, she bagged the victory by a length in 1m 43.57s before Crazy Beautiful (13-2), who belonged among the favourites prior to the event. The grey filly followed the leader throughout the race, yet it was pretty apparent she needed a slight break to recuperate and brace herself for the attack. She wasn’t granted such a moment, though, so her finish wasn’t explosive at all as Crazy Beautiful more or less just stayed on to grab the second in front of late finisher Adventuring (71-10).

Tobys Heart (8-5) seized the spot of the leading chance of the Rubicon, and despite the fact she showed a turn-of-foot in the end, the bay filly grew tired in the final stage of the race and had to settle for fourth.

Without Sleepy Eyes Todd, eight three-year-old and older horses met in this G2 dirt race held at the distance of a mile and a furlong, while most of the purse of $200,000 goes to the connection of Independence Hall (7-2). The four-year-old colt trained by Michael McCarthy has always looked promising but managed to score his only Grade race as a junior. Since then, he’s been placed in some prestigious races, yet he had to wait for another big success until Saturday.

On the sloppy track, Javier Castellano urged Independence Hall to charge for the lead as soon as they broke away, and closely followed by Code of Honor (23-10), they then shortly fought for the first place at the final stretch. Still, Independence Hall soon enough scooted clear of his rival and ran towards his premiere G2 triumph achieved in 1m 50.30s. After finishing second behind Knicks Go last time out, the winner again demonstrated his class when beating consistent Grade performer Code of Honor by an impressive 7 and ¼ of a length. Hugely supported King Fury (9-5) was best of the rest, trying to snatch at least the second place but coming short by a length.