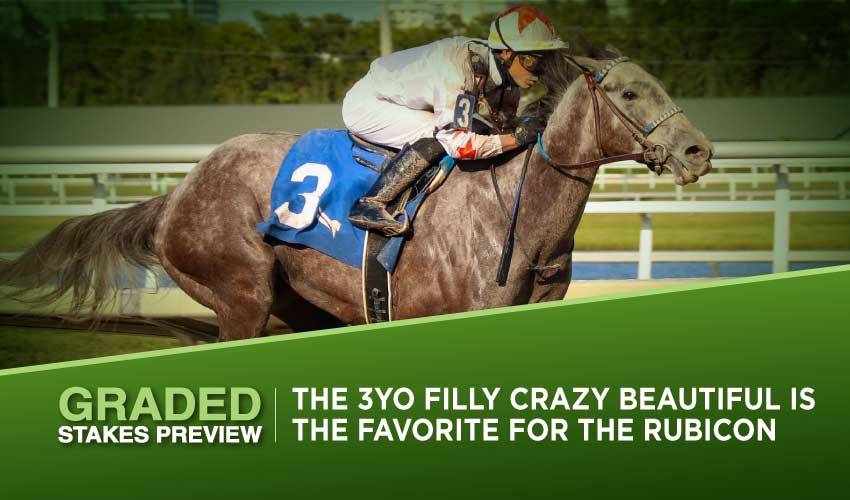 Friday’s card at Keeneland primarily offers a G3 event for three-year-old fillies – the Rubicon Valley View S, while the high-class action at this course will also continue at the weekend.

The G3 turf race, open only to three-year-old fillies, is held at the distance of a mile and half of a furlong and the purse of $150,000 attracted a large field, headlined by Crazy Beautiful (9-2) trained by Kenneth G. McPeek. The grey daughter of Liam’s Map has run most of her races on the dirt, where she excelled at the G3 and G2 levels. Throughout two seasons, she’s amassed a second place at the G1 level, two G2 victories, a G3 success, and also two black-type triumphs. However, when she tried her luck among the absolute elite this year, she didn’t fire at all; still, she showed to be in fine form she bagging a black-type win at the beginning of October.

Despite spending most of her career on the dirt, Crazy Beautiful scored her debut as a two-year-old on the turf surface; thus, she shouldn’t be much surprised by Friday’s switch. Besides the favourite, Lady Speightspeare (5-1) has already enjoyed her triumph at the Grade scene, moreover, she won the last year’s G1 Natalma Stakes for two-year-old fillies. Since then, she didn’t hit the track until this September when her trainer, Robert L. Attfield, pointed her towards an Allowance race where Lady Speightspeare easily returned to winning ways. However, many questions continue to surround her, especially the one about her actual class. She’s one to consider here anyway as she’s the only G1 winner in the race after all.

In May, Gam’s Mission (8-1) showed up in the G3 Regret Stakes, where she bagged her only Grade victory, upon which she finished fourth in the G1 Belmont Oaks and fifth at Saratoga. The Cherie DeVaux bound bay should benefit from a lesser competition here as she faces, for example, Breaker of Chains (10-1), trained by George Weaver. The bay has run only three times, yet her victory in a maiden was imposing and promising for the filly’s future. Still, in her previous races, which happened in Ireland, she didn’t beat much there.

The Irish raider trained by Joseph O’Brien, Queenship (12-1), is a Listed winner, but something similar to Breaker of Chain also applies to her, while both Adventuring (6-1) and Tobys Heart (8-1) scored at the Kentucky Downs last time out. They have displayed some class in the past, while the former should safely handle the trip, and the latter also seems smart enough to play an impactful role here.

Our betting pick for the Rubicon Valley View S is Crazy Beautiful as she’s in form, and her class should be enough to strike gold here.