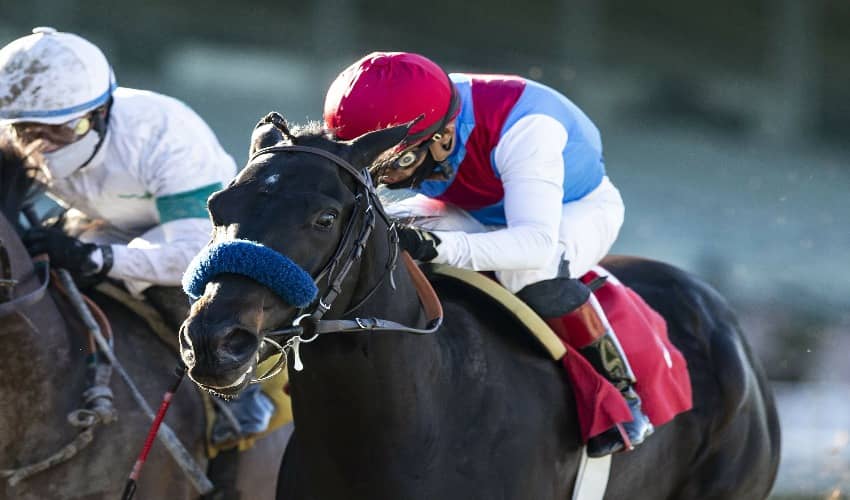 Hall of Fame trainer Bob Baffert’s Medina Spirit is looking good heading into the April 3 Runhappy Santa Anita Derby 2021 (G1) at Santa Anita Park. The runner worked a half-mile on Sunday in 48 as he prepared for the event.

Owned by Zedan Racing Stables, Medina Spirit kicked off his 3-year-old campaign by finishing second in the Sham Stakes (G3). Next time out, he took a front-running victory in the Robert B. Lewis Stakes (G3) ahead of Hot Rod Charlie, and he recently finished second in the March 6 San Felipe Stakes (G2).

Medina Spirit is standing in for Bob Baffert’s Life Is Good, who was a leading name on the 2021 Road to the Kentucky Derby before suffering an injury.

Runhappy Santa Anita Derby 2021: Rock Your World, The Great One

Another runner that worked on Sunday in preparation for the Santa Anita Derby was Rock Your World, owned by Hronis Racing and David Michael Talla. Trained by John Sadler, he covered five furlongs in 59 1/5. That was the fastest time from 76 works at the distance.

Rock Your World is 2-for-2 on the Santa Anita turf, winning a Jan. 1 maiden special weight race and the Feb. 27 Pasadena Stakes.

Trainer Doug O’Neill is sending in The Great One. He hopes that the runner can bounce back after finishing fifth behind Life Is Good in the San Felipe Stakes.

The Great One went into the San Felipe following an impressive 14-length maiden victory. But after bumping another runner at the start and going four-wide into the stretch, he fell back and finished 17 lengths behind Life Is Good.
He will be joined by regular rider Abel Cedillo.

“Abel (Cedillo) will be back on him, and we’re excited about getting another chance against these caliber of horses,” O’Neill said. ‘We’re real happy with The Great One and think he can rebound and run a big race.”

Dream Shake and Others

Some of the other horses that worked included Dream Shake for Peter Eurton and Roman Centurian for Simon Callaghan. The former went five furlongs in 59.80, while the latter covered five furlongs in 1:00.40.

Exline-Border Racing, SAF Racing, and Richard Hausman’s Dream Shake is a Twirling Candy colt. He has a career record of 1-0-1 from two starts and earnings of $72,600, with all of his races coming this year.

Both of his runs have been at Santa Anita Park, with a maiden special weight victory on Feb. 7 and a third-place finish in the San Felipe.

Roman Centurian is owned by Don Alberto Stable and Qatar Racing Limited. He is a son of Empire Maker with a career record of 1-1-0 from four starts and earnings of $78,020.

Make sure to check Horse Racing Tote for all the latest horse news, graded stakes, updated odds, last minute results and so much more.