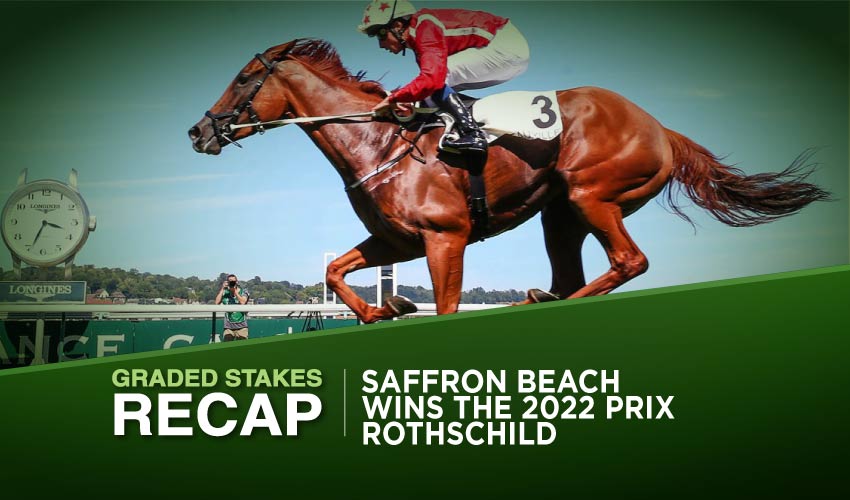 On Tuesday, the French Race Course in Deauville hosted a treasured G1 race for fillies and mares – the G1 Prix Rothschild over a mile, won four times by phenomenal Goldikova in the past. In the 2022 edition, preferred Saffron Beach didn’t allow any upset to happen, and after a peaceful run, she triumphed before Tenebrism.

The G1 turf race lured in a field of seven three-year-old and older fillies and mares, including brilliant Saffron Beach (3-5). Vying for the purse of €300,000, the four-year chestnut settled at the front of the mile-long race, and once she was asked by William Buick aboard, she scooted clear from her rivals to triumph by two and ½ of a length. Crossing the wire in 1m 36.45s, Saffron Beach won in front of Tenebrism, with Goldistyle (26-1) grabbing third.

The Jane Chapple-Hyam bound victress has always boasted lots of talent, which she used to score the G1 Sun Chariot Stakes in 2021, and after two great performances in 2022, she added the second G1 success to her resume in the Prix Rothschild. The daughter of New Bay simply gave an outstanding effort despite carrying bigger than second Tenebrism.

The Aidan O’Brien-trained three-year-old also scored a G1 event last season, while last time out, she prevailed in the G1 Prix Jean Prat. On Tuesday, she ran a good race in defeat and bravely handled the mile distance, yet she didn’t entirely revoke the statement that she inclined more to shorter distances. Goldistyle snatched the third place in front of Malavath (12-1), while Pearls Galore (10-1) had to settle for fifth.

Follow us on Social Media for more Prix Rothschild updates!