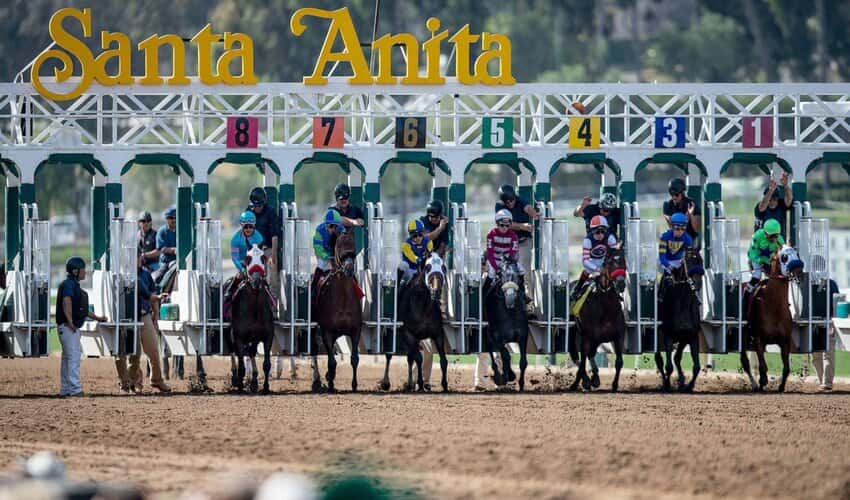 The curtain comes down on the long Santa Anita meet this weekend, and there’s a final flourish with the G2 Santa Maria on Saturday, in which the high-class pair Private Mission and Blue Stripe bid to add to their previous victories at this level. Trainer Phil D’Amato has strong options in Sunday’s turf races with Red King going for a second success in the G3 San Juan Capistrano, and Hong Kong Harry stepping up in grade and looking for a third straight win in the G3 American.

She was the villain of the piece in the G1 Breeders’ Cup Distaff last year, but now Private Mission has a chance to show her good side in the Santa Maria, the feature at Santa Anita on Saturday.

At Del Mar she set crazy quarter-horse fractions and blew the Distaff – and herself – to bits, trailing in last after emptying out on the turn. She has made little impact in two starts sprinting since then, and despite her obvious pace she is better served by today’s extended mile, as she proved when a dominant winner of the G2 Zenyatta over course and distance in October.

A repeat of that performance would give her every chance and she’ll be either on or near the pace, blending her early speed with the ability to stretch out.

Her main rival is the Argentine import Blue Stripe, an also-ran in the Distaff on her US debut but much better on her 2022 debut in the G2 Santa Margarita over a mile-eighth here in April.

She showed the form that made her a G1 winner in her native land when doing her best work late, rallying for a length success with half today’s field left trailing in her wake – Private Mission’s barnmate Varda was third, beaten seven and a half lengths, prolific lower-level winner Bye Bye Bertie was three-quarters of a length back in fourth, and Midnight Jamboree was four lengths further away in seventh on her stakes debut.

Given that Blue Stripe can move up from that effort, her first in almost six months, she likely has nothing to fear from those three beaten horses. The field is completed by another pace angle in Lady Mystify, a dead-heat third behind Malathaat in the G3 Doubledogdare at Keeneland and now needing to find more against the two principals.

There is probably plenty more to come from recent G2 winner BLUE STRIPE and the expected pace should set things up nicely for her stalk-and-pounce tactics.

Phil D’Amato has won the San Juan Capistrano, the unorthodox marathon that headlines Sunday’s card at Santa Anita, for the last three years and sends two to the gate as he bids to seal the quadruple.

The 2020 San Juan winner, 2019 and 2021 third Red King leads the way, and his proven stamina counts for plenty despite his lack of strong recent form, having won just one of his last dozen starts. He will be closing late as usual, which is also a characteristic of barnmate Rijeka, who is short on class – zero-for-ten in stakes – but a winner last time out here in allowance grade over ten furlongs.

Ex-Irish Modus Operandi is another yet to make it pay in stakes, but was beaten only four lengths when eighth in the G3 Louisville over a mile and a half at Churchill Downs on his Graded debut, and could move up for stretching out further given his sturdy European pedigree.

Keeneland maiden winner Avenue is likely to improve with just five starts to his name but stamina is obviously a question mark, as it is for Dean Martini, whose only victory in his last 15 starts came over a mile at Horseshoe Indianapolis, and Kazan, four lengths behind Red King in a ten-furlong starter allowance here in February.

The multiple Chilean G1 winner Breakpoint has been well beaten in all three starts at Graded level in this country, while fellow exotic Muhammad Ali has his first start in the US after a fairly undistinguished career in Peru and is both impossible to assess and hard to fancy.

This is a poor race. Previous winner Red King is obviously a big player but MODUS OPERANDI is bred to stay and is the choice after a promising recent run at G3 level.

D’Amato has two good chances in the American as well, with his main hope the in-form Hong Kong Harry, who brings sizzling recent form as he bids for a third straight win.

The British import was nothing particularly special across the pond but has been lit up by his move Stateside, winning allowance optional claimers here over a mile-eighth, most recently when value for more than the winning margin of a length and a half. He is ready to move up, while barnmate Gregdar could be suited by cutting back after running fourth in the ten-furlong G2 Charles Whittingham here on his stakes debut, after three starts in sprints.

Last year’s American winner Restrainedvengence had 2019 American winner Majestic Eagle a length and three-quarters back in fourth on that occasion, but it’s a tougher task this year and he was in better form coming into the race 12 months ago.

Vanzzy is zero-for-six at Graded level, but gave notice that he might break through soon when beaten just a half-length in the G3 San Francisco Mile at Golden Gate Fields, with Restrainedvengence eighth and Ecrivain, who on his best French form would have an outstanding chance, a never-in-it 11th. Perhaps he hated the first-time blinkers.

It was a moderate edition of the G1 Pacific Classic at Del Mar that Tripoli won last year and his form trailed off after that. His chance isn’t obvious back on turf and down in distance off a seven-month layoff, but he won an allowance on the lawn over course and distance last May and shouldn’t be dismissed.

This is a competitive contest, but HONG KONG HARRY hasn’t put a foot wrong since arriving Stateside and is the choice to make his stakes breakthrough.

Follow us on Social Media for the Santa Maria & Santa Anita Races updates!