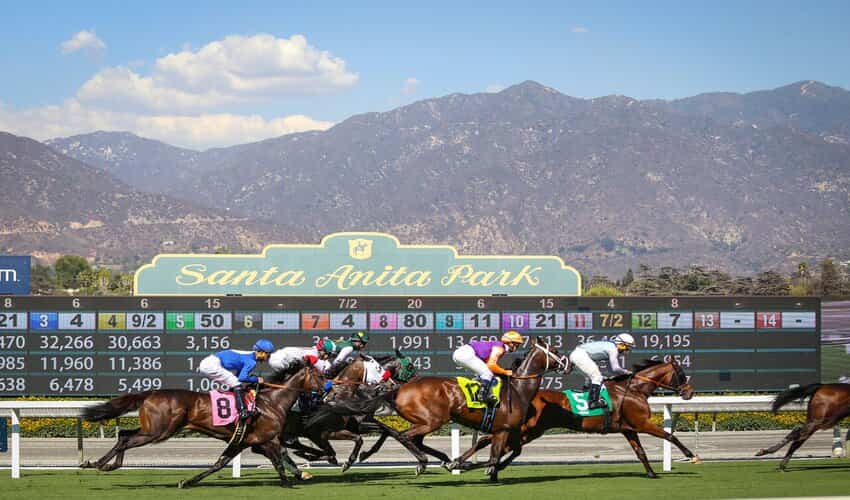 It’s the calm after the Gulfstream Park storm at Santa Anita on Sunday where the big race of the day, the Grade 2 San Marcos, is a dash of deja vu with the three leading contenders – Say The Word, Acclimate and Friar’s Road – all coming on from the Hollywood Turf Cup in November, where they filled out the trifecta.

Different track, different distance, different day, but the same horses. The feature San Marcos at Santa Anita on Sunday is almost a carbon copy of the Hollywood Turf Cup at Del Mar in November, but enough has changed between now and then to make for an intriguing puzzle.

In that Grade 2 at Del Mar, trainer Phil D’Amato pulled off the exacta when Say The Word came running hard from the turn, going back-to-front in the final quarter-mile past his six rivals, catching front-running barnmate Acclimate in the final strides to win by a length. Just a neck back in third was Friar’s Road who had started his rallying run from a place ahead of the winner, but had no answer to Say The Word’s relentless challenge.

Two months on, what has changed? The San Marcos, at a mile and a quarter, is two furlongs shorter than the Hollywood Turf Cup, and that may not help Say The Word, whose biggest wins – also the 2020 Grade 1 Northern Dancer at Woodbine and last year’s Grade 2 Elkhorn at Keeneland – have come at a mile and a half. It might not help the freewheeling Acclimate either, for he set only a fair gallop in the Turf Cup and his strong suit is stamina too, with two wins in the Grade 3 San Juan Capistrano over a mile and three-quarters on his roll of honour.

It won’t bother Friar’s Road, who had previously finished a nose behind Acclimate when they were second and third in the Grade 2 John Henry Turf Championship over course and distance, and who went on to be runner-up in the Grade 3 San Gabriel here over a mile-eighth, in a short-field contest moved off the turf.

A nose ahead of him in the San Gabriel was Bob And Jackie, who led at every call and had enough left to fend off Friar’s Road’s late thrust and score his first Graded win. Bob And Jackie has more natural speed than the Turf Cup trio and will be out there on the lead again, probably duelling with Acclimate. Friar’s Road is 2lb better off with Bob And Jackie, which might tip the balance towards him.

Bob And Jackie’s barnmate Lincoln Hawk has never won a stakes, but looked sharp when taking an allowance optional claimer here over a mile-eighth last time out. Dicey Mo Chara has a very similar profile, well beaten in the Grade 1 Hollywood Derby on his sole stakes start but winner of an allowance optional claimer at Del Mar the time before. Plenty more is required from both at this level.

Four of the six runners in the San Marcos can be given a big chance, and of that quartet perhaps FRIAR’S ROAD will be the one best suited by today’s ten-furlong test.

Follow us on Social Media for instant San Marcos updates!