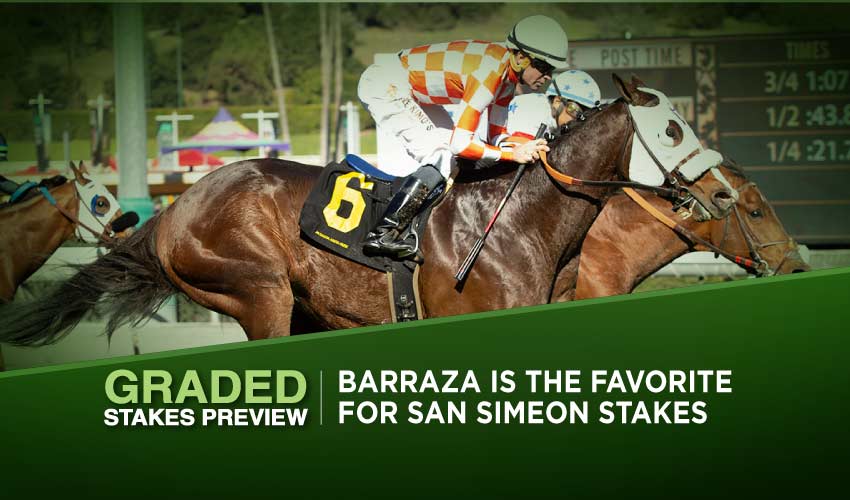 It’s a weekend of contrasts at Santa Anita, with a big field of inexperienced three-year-olds looking to establish themselves in the ungraded Pasadena on Saturday, followed by some much more seasoned sprinters, headed by Beer Can Man and Bombard, in the Grade 3 San Simeon Stakes, the highlight of Sunday’s card.

Some battle-hardened sprinters go to the gate for the San Simeon Stakes, the feature of Sunday’s action at Santa Anita, but the focus falls on a trio of fresh-faced contenders.

Local favourite Barraza arrives on a hot streak, bidding for a four-timer after moving smoothly through the gears from an allowance, to an allowance optional claimer, both over course and distance, and finally making his stakes breakthrough here over six furlongs last month.

He showed tactical versatility when making all the running – his previous victories were characterised by a late finish – and keeping on well to beat Commander by two and a quarter lengths, with the third horse more than five lengths back and Chaos Theory further adrift in sixth place. Barraza has never won anywhere else and horses-for-courses is an important factor.

That was probably a lifetime best for Commander and a 2lb pull will help him, but Chaos Theory hasn’t won for more than a year and may be on the downgrade at the age of seven.

Another posting arguably a lifetime best last time out was Beer Can Man, who chased the pace in the Grade 2 Joe Hernandez over course and distance on New Year’s Day, led inside the last sixteenth but was nailed on the line and beaten a nose. He got the Grade 3 Turf Monster at Parx Racing in September on a DQ and has a touch of class.

A length and a half back in third in the Joe Hernandez was Bran, the last of the three ‘youngsters’ here. He could never land a blow on his debut Stateside after emigrating from France – where he was four-for-13 – but will certainly improve for the new experience and stays seven furlongs well.

Grade 3 winner Guildsman was a promising juvenile in Britain in 2019 – third in the Group 2 Coventry at Royal Ascot – but has deteriorated over the last year and comes here on a ten-race losing streak. He was never at the races in an allowance optional claimer at Aqueduct latest and is easy to ignore, but not so Indian Peak , who won a stakes over course and distance in October and the following month was beaten only a length into third in the Grade 2 Seabiscuit at Del Mar, when stretching out to a mile-sixteenth.

His last two starts were disappointing, but they were over a mile-eighth (and one was moved off the turf) so he can be forgiven, and the cutback to today’s distance should suit.

The old man of the party Bombard won the Grade 3 Daytona over course and distance in May, but has run only once since then. He isn’t improving at the age of nine but could certainly play a part at a track where he is five-for-ten.

BARRAZA comes to the San Simeon Stakes in scintillating form and has scope for further improvement. He is the choice ahead of established Graded performer Beer Can Man.

A host of untested colts and geldings come together for the Pasadena, Santa Anita’s Saturday highlight, and the lack of substantial form evidently gave the odds-makers a headache, with seven of the 11 runners available at single-figure odds.

In the end they decided upon Sumter, who boasts similar credentials to a few of his rivals in that he has won only a maiden, getting it done at the fourth attempt when clearing away to win by three and a quarter lengths at Del Mar in November. That was over five furlongs, though, and there’s an obvious question mark about stretching out to a mile.

That goes also for Epoch , the neck winner of a maiden here over six and a half furlongs when the third horse was a mile back, which is always an encouraging sight, and Don’t Swear Dave, who won his maiden here and then shaped with plenty of promise when runner-up in a stakes at this track over six and a half, finishing his race off best of all to indicate that a little further wouldn’t be a problem. Recent British import Echosmith was fourth, a length and a quarter behind on his US debut, having previously won a minor race on the synthetic surface at Kempton Park, and is likely to do better with that under his belt.

Conversely, Crosby Beach is dropping back a furlong after going gate-to-wire here last month to lose his maiden tag at the fourth attempt, and is preferred to Red Road , who got off the mark at Gulfstream Park when a longshot winner over a mile in December.

It’s third time around for Handy Dandy and Barsabas, who were third and fifth – beaten one and a half lengths and four and a quarter – on their stakes debuts here over course and distance last month behind the promising Cabo Spirit. The pair then filled out the exacta in a starter optional claimer, again over course and distance, when Handy Dandy again had the measure of his old rival after finishing off his race well, the margin of victory a length and a half. Handy Dandy may simply be the better of the two.

Fast Draw Munnings tries the weeds after three runs on the main track, including victory in a state-bred stakes here over a mile-sixteenth last time out, and that makes him an unknown quantity, as is Irish import Doitforandrew, who improved markedly for being gelded, winning twice on the synthetic surface at Dundalk over seven furlongs. He’s bred for a mile, and if he moved up because of the gelding operation rather than the switch from turf he has a big chance in this company.

There’s no standout in the Pasadena but DOITFORANDREW seems transformed by being gelded, and is the choice in the hope he can maintain his Irish form on his US debut.

Sign up and get a 10% rebate! Make sure to stay tuned for the latest racing odds, and races entries.