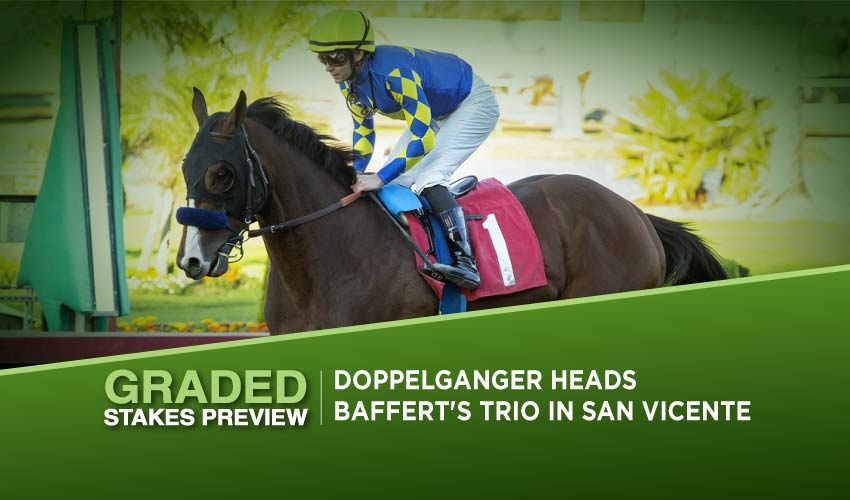 Palos Verdes Stakes will see just the fifth start of interesting horse Cezanne, while the Megahertz Stakes for fillies and mares could mean another G3 victory for Burgoo Alley, Bodhicitta, or Warren’s Showtime.

Although this G2 dirt race doesn’t belong in the Road to the Kentucky Derby, it can serve as a trial for some of its parts as it’s meant for three-year-old colts and held at the distance of 7 furlongs. The purse of $200,000 attracted just five participants, including three charges of Bob Baffert, who has won the San Vicente Stakes on eleven occasions, most recently thanks to Nadal and Life Is Good.

Just one of his trainees has experience with the Graded scene as Pinehurst (5-2) scored the G1 Del Mar Futurity after he won his debut. At Del Mar, he used his early speed to settle at the front, and upon reaching the final stretch, he quickly drew clear from his rivals. Pinehurst showed up also in the Breeders’ Cup Juvenile; yet it seemed he didn’t handle the distance and finished tired.

Getting back to seven furlongs should serve him well. Both of his stablemates have a victorious debut under the belt, while Doppelganger (8-5) won easily at the Los Alamitos, and McLaren Vale (4-1) triumphed narrowly at Santa Anita. Regarding the remaining duo, Forbidden Kingdom (5-2) finished second in the G3 Bob Hope Stakes in November, and John W Sadler’s What In Blazes (8-1) broke his maiden at the second attempt.

After being game second in his debut, nobody could’ve outmatched him in a five furlong-long race at Del Mar, where he succeeded by more than five lengths.

Our betting pick for the San Vicente Stakes is Pinehurst due to his experience, quick start, and ability he’s already shown.

The G3 turf race offers the purse of $100,000 for a field of four-year-old fillies and older mares who will clash at the distance of a mile. Burgoo Alley (4-1), trained by Philip D’Amato, is about to carry the highest weight of all eight contestants after her successful outing in the G3 Autumn Miss Stakes in October.

She travelled in fifth place, from where she launched a finish thanks to which she left her rivals behind. The victory was slightly surprising from her; however, she failed to deliver in the American Oaks when trying to have a say in a better competition. She finished ninth, so returning to the G3 scene and a tad shorter distance should suit her. A trio of fillies and mares will carry less than Burgoo Alley, while all of them look interesting for the Megahertz Stakes.

We’ve been especially fond of Warren’s Showtime (5-2) as she bagged a G3 win in June, then placed in black-type races, and ran in second in the G3 Bayoka Stakes. However, as he tends to launch her finish from the rear of the field, she just needs lots of luck to manoeuvre successfully in between her rivals to catch the front in time. We still think she’s capable of snatching another G3 victory; at least, she is in the mix together with Avenue de France (8-1), a Leonard Powell bound five-year-old mare who hasn’t shined at the Grade scene yet.

Still, her last year’s performances weren’t bad at all as she won two black-type races, including December’s Miss America Stakes. After sitting in fifth place, he rallied forward to score a nice win, leaving behind also Sloane Garden (15-1).

Saturday’s race is hugely competitive, so we need to mention Bodhicitta (3-1), who took second in the G3 Robert J Frankel Stakes last time out, but she’s not especially reliable. The G2 winning filly Madone (4-1) is even worse in terms of reliability as she was only seventh in the Autumn Miss Stakes behind Burgoo Alley, performing bellow par for second time in a row.

Our top pick for the Megahertz Stakes is Bodhicitta, whose recent performance suggested she’s in form. If she starts her progress in time, she could score this in front of Burgoo Alley.

The last of three Grade races held on Saturday at the Santa Anita Park is meant for the sprinters who will clash at the distance of six furlongs on the dirt surface. The G3 event boasts the purse of $200,000 for which six four-year-old and older horses will compete, while the most interesting participant here is five-year-old Cezanne (8-5) trained by Bob Baffert.

The son of Curlin won two smaller races as a three-year-old and looked like a Grade winner in the making back then; however, he only managed to finish fourth in the Listed company in August 2020, which was his last start for a long time. He returned in April 2021 to score impressively the G3 Kona Gold Stakes at the distance of six and a half of a furlong, but he hasn’t run since. He didn’t mind the hiatus much last time, so it could be estimated he won’t mind it on Saturday, too, so Cezanne looks the leading chance here.

Bob Baffert also relies on four-year-old Essential Wager (5-2) who has three outings under his belt, including a smooth victory in an Allowance race in December. So far, he hasn’t done anything wrong, and only time will tell how good this son of Honor Code could be, while Team Merchant (6-1) is the second four-year-old in the field, winning a black-type race but failing to have a say at the G1 scene. Returning to the G3 could go well into his stride. Arham (4-1) is the last to mention due to his last year’s Allowance victories, while he’s yet to tackle the G3 company.

Our betting pick for the Palos Verde Stakes is Cezanne, who could’ve been an absolute star for Bob Baffert, and he just should handle this G3 competition.