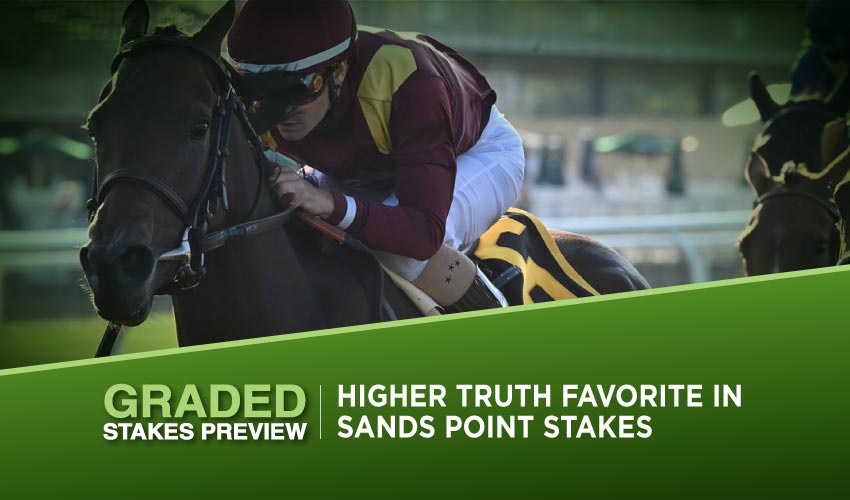 Some smart fillies get the chance of a Grade 2 prize at Belmont Park on Saturday, when the closely contested Sands Point Stakes offers Grade 1-placed duo Higher Truth and Fluffy Socks an opportunity for bragging rights at Chad Brown’s barn.

In a race that closely resembles the QEII Cup at Keeneland the same day, although at a slightly lower level, the first option in Saturday’s feature at Belmont Park is again to examine the credentials of the Chad Brown entry.

Brown takes a two-pronged approach in the Sands Point, a race he has won in the last two years and four times overall. The morning line prefers the Galileo filly Higher Truth (2-1), who engaged in a stirring stretch duel with barnmate Shantisara in the Jockey Club Oaks here over an extra quarter-mile, in which she came off second best by a half-length after attempting to lead at every call.

That ensured she had hit the board in every leg of the NYRA Turf Triple, although she has only a maiden and an allowance win to her name, both over a longer distance than today’s race. She will likely be a pace factor in order to maximise her proven stamina.

Stablemate Fluffy Socks (7-2) is winless in 2021 from four starts, the most recent when running a lifetime best in the Grade 1 Del Mar Oaks in August, finishing her race off well to be third, beaten a length and three-quarters. That followed a good showing in the Grade 3 Lake George at Saratoga, where she again closed fast and late to be runner-up behind barnmate Technical Analysis. Blessed with more speed than Higher Truth, it’s likely she’ll be hunting down her barnmate in the stretch.

Jockey Club Oaks third Harajuku (3-1) was shipping in to make her US debut on that occasion, and is now in the care of Graham Motion. She had winning form at Group 3 level in France, but could never really get competitive in the Jockey Club Oaks so the drop back in distance may help in that regard, although she was a solid ten-furlong filly in France.

The rest of the field comes on from a stakes race here at a mile last month: Jordan’s Leo (6-1) did best to be runner-up behind longshot Spanish Loveaffair, with Runaway Rumour (8-1) third, Our Flash Drive (12-1) fourth, Plum Ali (8-1) fifth and Third Draft (30-1) ninth.

On the revised weight terms, Runaway Rumour comes out ahead, and this three-time course winner had previously turned in a good effort to be runner-up to Technical Analysis in the Grade 2 Lake Placid at Saratoga, form that ties in with Fluffy Socks.

Allowance winner Jordan’s Leo is zero-for-three at Belmont, although all on the board, while Plum Ali, winner of the Grade 2 Miss Grillo here a year ago, was a couple of lengths behind Higher Truth in both the Belmont Oaks and Saratoga Oaks and needs to find more.

Sands Point Stakes Betting Prediction: essentially comes down to a choice between Chad Brown’s pair, and FLUFFY SOCKS gets the verdict after running a lifetime best at Del Mar last time.

Join us at JazzSports and make sure to stay tuned for the latest Horse racing odds, Racing entries and Races results.