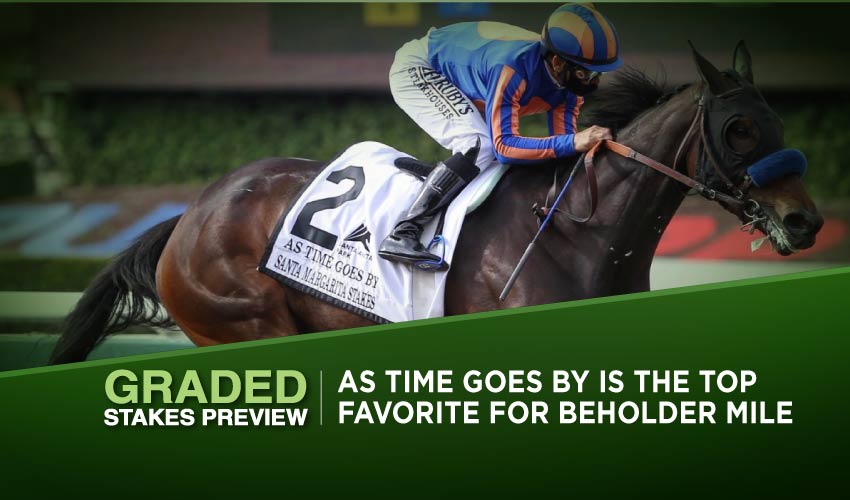 The historic Grade 1 Santa Anita Handicap – the Big ‘Cap – is the centerpiece of the biggest day of the year at the Los Angeles circuit, and features an enthralling match-up between last year’s runner-up Express Train and the in-form Stiletto Boy.

Deja vu drifts around the Beholder Mile like a cloud, with today’s contest containing much of the DNA of last year’s version of the race. Twelve months ago Kenny McPeek won with Swiss Skydiver, who outran an improving filly called As Time Goes By, and now another high-class McPeek distaffer bids to do exactly the same thing.

This year’s McPeek representative is Envoutante, who broke a skein of slightly disappointing performances when taking the field apart in the Grade 2 Falls City over a mile-eighth at Churchill Downs in November, sprinting clear to win eased down by six lengths from that good filly Bonny South. Now Envoutante comes looking for her first Grade 1 and if this race were at Churchill Downs, where she is four-for-seven, she might be favourite.

However, we’re at Santa Anita, which is home territory for As Time Goes By, who is uncannily also four-for-seven at her favourite track and has never finished out of the first two here. Her heavy defeat in the BC Distaff can be forgiven, as the race was wrecked by a vicious speed duel, and since then she has been perfect.

She fought gamely to regain the lead and win the Grade 3 Bayakoa at Los Alamitos in December, and then ran them out of town in the Grade 3 La Canada here over a mile-sixteenth in January, romping by 13 and a half lengths. Like Envoutante, she is bidding for a first Grade 1, and one of these mares will go home with the job done.

Bizarrely, there is more than one Grade 3 race named the Bayakoa, and Miss Bigly won the version at Oaklawn Park on her most recent start, her first win at Graded level, when keeping on well under pressure in the closing stages. She meets Grade 1 opposition now and will need to find more.

It’s been a long time since we saw Varda winning the Grade 1 Starlet at Los Alamitos, 15 months to be precise, and this barnmate to As Time Goes By will surely need the outing to set her straight. The field is completed by Founder’s Day, who has been beaten 11 times straight since winning a maiden and makes her stakes debut today. Fourth place would be an enormous triumph for her.

Last year’s runner-up AS TIME GOES BY is in superb form, loves this circuit, and is the choice to win her first Grade 1 in a race that comes down to a straight duel with Envoutante.

A deep and competitive field convenes for the Frank E Kilroe, the nature of a tricky race made plain by the fact that the morning-line favourite is a 7-2 chance and there are six others at single-figure odds.

The odds-maker’s choice is Count Again , who came down the stretch like a runaway train in this race 12 months ago only to lose out in a thriller of a finish by two necks, with Flavius a half-length behind in fourth spot. Such an exciting horse to watch, Count Again went winless through 2021 but ended that streak in the Grade 3 Thunder Road over course and distance last month, when he again left it late but this time not too late.

He got up in the last jumps to catch Subconscious and win by a half-length, with Delaware a never-dangerous fourth, and although luck in running plays a big part with a late closer Count Again appears back to somewhere near his best. That was arguably the best we’ve seen from Grade 2 Twilight Derby winner Subconscious too, and he’s 2lb better off with his recent conqueror today.

The extra furlong of the Grade 2 San Pasqual here may have been the downfall for Law Professor, who couldn’t get to grips with the high-class Express Train, but his narrow defeat of Beyond Brilliant in the Grade 2 Mathis Mile here – a race taken off the turf – with the third horse eight and a half lengths back puts him right in the picture. That was Law Professor’s first win at stakes level and he may be better suited by this distance than Grade 1 Hollywood Derby gate-to-wire winner Beyond Brilliant.

Last year’s four-runner Bernard Baruch at Saratoga was very likely the worst Grade 2 of the year, but it gave Tell Your Daddy his stakes breakthrough when he led all the way and held on gamely by half a length. Next time out he made light of his longshot odds when runner-up in the Grade 1 Keeneland Turf Mile – Space Traveller just a length behind in fifth – but couldn’t get home in a stakes at Aqueduct on his final start of the year, again runner-up but a length and a quarter ahead of third-placed Flavius, who looks the best of trainer Richard Baltas’s four-strong entry.

Back in Britain, Space Traveller was emphatically not a Group 1 horse, but he probably ran the race of his life when third behind Colonel Liam in the Grade 1 Pegasus World Cup Turf at Gulfstream Park last time, beaten just a length and a half, and the return to a mile could be ideal. He’ll be coming along late under hold-up jockey supreme Jamie Spencer (although maybe not as late as Count Again).

It’s hard to be dogmatic in such a tight contest and small stakes are advised, but SUBCONSCIOUS is on the upgrade and may gain compensation for his narrow defeat last time.

It’s one of US racing’s greatest monuments, the Santa Anita Handicap, known as the Big ‘Cap and won by all-timers such as Seabiscuit, Affirmed, Spectacular Bid, John Henry, Alysheba, Best Pal and Tiznow.

Any of those champions would be 1-5 to win Saturday’s renewal even with 140kg to carry, as times change and races such as the Saudi Cup and Dubai World Cup bring financial incentives that beat history and tradition out of sight, but there will never be a poor running of the Big ‘Cap and there’s plenty to pick over here.

The crux of the race is whether Express Train can stretch out his stamina to ten furlongs, a distance at which he is zero-for-three including a heartbreaking defeat in last year’s Big ‘Cap, when he had the race won at the sixteenth pole but was run down by Idol and beaten a half-length, with Kiss Today Goodbye sixth, beaten six and a quarter lengths.

He never looked likely in both the Grade 1 Hollywood Gold Cup and the Grade 1 Pacific Classic and it certainly wasn’t the distance that stopped him, but there’s little doubt Express Train is better at slightly shorter, as his recent wins here in the Grade 2 San Antonio – beating Hot Rod Charlie – and Grade 2 San Pasqual demonstrate. Last time out in the San Pasqual over a mile-eighth he was comfortably superior when coming three and a quarter lengths clear of the runner-up, with Spielberg beaten six and a half lengths into fourth and Kiss Today Goodbye and American Theorem never in the game back in fifth and sixth.

Given Express Train’s performance 12 months ago, this distance question may be just a statistical quirk, and in a race where only two – three at a pinch – can be seriously fancied he is a worthy favourite.

Main rival Stilleto Boy is not one of life’s winners – he’s two-for-13 lifetime, and his biggest win came in the Iowa Derby at Prairie Meadows – but he is in very good form at present and has been chasing home the best around. He was fifth in the Breeders’ Cup Classic behind Knicks Go, third in the Grade 1 Malibu behind Flightline, and third in the Grade 1 Pegasus World Cup behind Life Is Good, so would be a lock for best supporting actor even though he never gets the girl.

His best performance was his most recent and if there’s a chink in Express Train’s armour he’ll find it, and indeed finished two lengths ahead of that horse when they ran two-three in the Grade 1 Awesome Again here over a mile-eighth in October, although Express Train is 3lb better off today.

The only other with even vague pretensions to victory is Warrant, who filled the ‘show’ slot behind Mandaloun and Midnight Bourbon in the Grade 3 Louisiana at the Fair Grounds in January, albeit at a remove of more than eight lengths. He’s there to hit the board, although he has never gone further than a mile-eighth himself.

Although he is in good heart it’s hard to like Why Why Paul Why, whose stakes win at Parx Racing and subsequent runner-up spot in a stakes at Aqueduct, beaten almost seven lengths, give him an absolute mountain to climb at this level, while allowance optional claimer winner Soy Tapatio looks a very long way out of his depth.

It’s a two-horse race; Stilleto Boy is a worthy adversary but EXPRESS TRAIN went so close in the Big ‘Cap last year and now looks ready to make the breakthrough at ten furlongs.