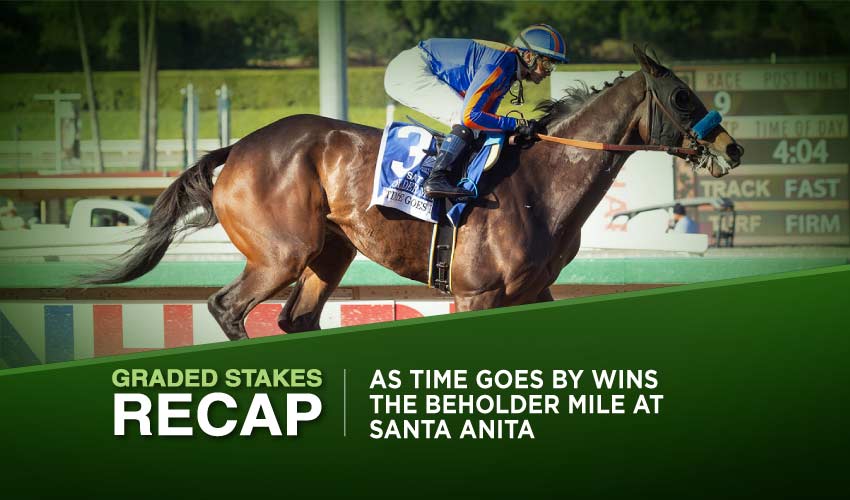 It was the big day of the year at Santa Anita Park on Saturday with six Graded stakes, three of them Grade 1s, including the marquee Santa Anita Handicap, a historic contest won in stirring style by the favourite Express Train. There was no shortage of thrills, with Count Again coming so fast and so late to win the Grade 1 Frank E Kilroe Mile, and the high-class As Time Goes By making her Grade 1 breakthrough in the Beholder Mile.

Train not in vain this time

Ten furlongs? No problem. Express Train laid the doubts over his stamina to rest in resolute style when grinding out the glory in the Santa Anita Handicap, the fabled Big ‘Cap, at the Los Angeles circuit on Saturday, gaining compensation for his narrow defeat in the race 12 months ago.

It was the nature of that loss that set critics off on the ten-furlong debate, given that Express Train had the race won and then let it slip away inside the final sixteenth. This time, though, there was plenty of opportunity for the five-year-old to give it away but he held on with an iron grip to get the job done by a head.

With a mile gone, Express Train ranged up alongside Warrant as they quit the turn and the 11-10 favourite put his head in front at the top of the lane, but Warrant wouldn’t go away and they fought it out to the wire. Stamina wasn’t an issue; Express Train took Warrant’s measure and kept it, rolling on under Victor Espinoza, stopping the clock in 2:03 and one-fifth. There were nine lengths back to second-favourite Stilleto Boy in third.

“As soon as he’s in front he knows he’s got it,” said Espinoza. “He just gave me a little bit of a hard time at the end to get me excited and pump up my muscles. It was an exciting race.”

It was a banner success for 76-year-old trainer John Shirreffs, his first score in the Big ‘Cap after so many years watching and trying. Notorious for keeping out of the winner’s circle, happier to look on from the side, Shirreffs made an exception for this historic victory.

“I’m over the top about winning this race,” he said. “This is the Santa Anita Handicap, this is an iconic race. Seabiscuit won it. It’s a dream.”

Express Train is in the form of his life right now, this first Grade 1 victory completing a hat-trick after wins in the Grade 2 San Antonio and Grade 2 San Pasqual, and Shirreffs is eyeing a challenge for the Grade 1 Hollywood Gold Cup at Santa Anita on May 30. He’s never won that race either, but he might have the horse to do it now.

You can count on Count Again

It wasn’t late, it was right on time. Count Again demonstrated his trademark flying finish to brilliant effect in the Frank E Kilroe Mile, coming along fastest and latest to make his breakthrough at the highest level.

The seven-year-old is a thrilling horse to watch, but even his biggest fans had cause to think he might miss the boat this time, as the 2-1 favourite was stuck on the rail behind a wall of horses as they took the turn. But there was daylight at the top of the lane, and Flavien Prat angled out Count Again and sent him after the leaders. Then it was just a case of whether there was time to catch them.

There was. Yet even at the sixteenth pole Count Again was two or three lengths adrift, but then he hit warp speed and ran them down in the last two strides, getting there by a head from Space Traveller, with Subconscious another head away in third and the game front-runner Beyond Brilliant three-quarters of a length back in fourth in a blanket finish. He covered the mile in 1:33 and one-fifth.

“He’s one of those horses who has been knocking on the door for a Grade 1, so to get it done today means a lot,” said trainer Phil D’Amato. “He’s a dream horse, if you’ve got dead aim with him at the top of the lane he’ll give you his late kick pretty much every time.”

This was Count Again’s sixth win from 15 starts and his first Grade 1, to go with a Grade 2 and a couple of Grade 3s. Awesome Again – that’s his sire, but it works just as well as a description of his performance on Saturday.

Play it again, Bob. Twelve months ago As Time Goes By finished second in the Beholder, and then went through 2021 trying but failing to win the Grade 1 that would make her priceless as a broodmare. This time, she made no mistake.

It may not have been her best-ever performance, but if a win is just a win, a Grade 1 victory is something special. The Bob Baffert-trained daughter of American Pharoah was out of the gate last of the four runners but was quickly on the lead under Flavien Prat, and from there on in they danced to her tune.

The 1-5 favourite was never threatened, widening four lengths clear on the far turn and keeping on strongly through the stretch to comfortably hold off Miss Bigly by two and a quarter lengths, stopping the clock in 1:37 and one-half. Her barnmate Varda took third, seven lengths back, with the hugely disappointing second-choice Envoutante never out of last place all the way around.

“We got the Grade 1,” said Baffert. “I talked the owners into another year with her. She gets better with age, such an exciting and classy mare. She never breaks a sweat.”

That would be undignified for such a regally-bred mare, by a Triple Crown champion out of 2013 Broodmare of the Year Take Charge Lady, and a half-sister to Grade 1 winners Will Take Charge and Take Charge Indy. The five-year-old has now won seven of her 14 races and has never been out of the first two in eight starts at Santa Anita.