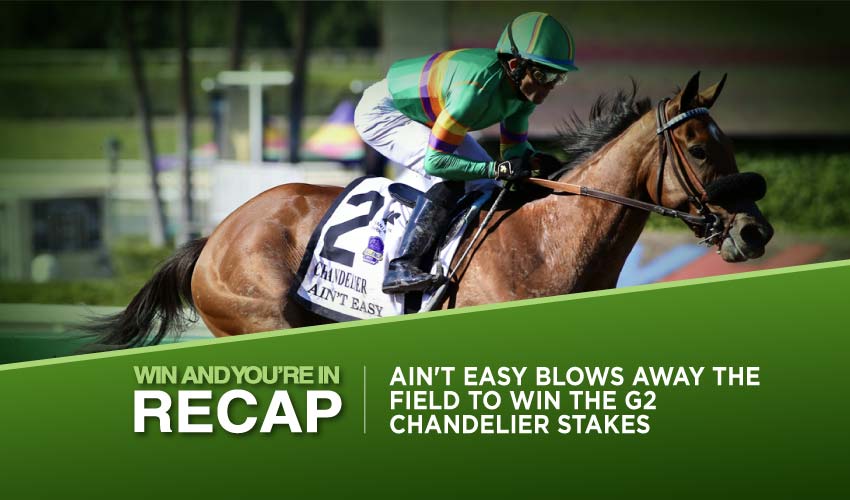 Santa Anita Recap there were Breeders’ Cup clues aplenty on the first day of the autumn meet on Friday at Santa Anita, with three unbeaten juveniles adding their names to the guest list for Del Mar next month. Corniche made the deepest impression when easing to an all-the-way win in the Grade 1 American Pharoah for trainer Bob Baffert, while fast-improving filly Ain’t Easy and speedy gelding One Timer also showed they’d be players on the big championship weekend with comfortable victories.

Corniche performed like a well-maintained Rolls-Royce in the American Pharoah at Santa Anita on Friday, purring his way to a deeply impressive victory and booking his fees-paid ticket to next month’s Breeders’ Cup Juvenile, setting the bar mighty high in the process.

The son of Quality Road, trained by Bob Baffert, was a heavy favourite at 2-5 and travelled like it, quickly away from his inside post and on the lead throughout. Corniche was kept company by his barnmate Rockefeller but shook that one loose at the top of the lane and barrelled home under a hand-ride from Mike Smith, hitting the wire three and a quarter lengths clear of Pappacap, who was in turn a half-length ahead of the late-closing Oviatt Class. The clock showed 1:44 and four-fifths.

“There’s just so much upside to this horse,” said Smith to the BloodHorse. “This is what’s really exciting about him. He’s a big horse, and as he starts to get even fitter and harder inside, he’s gonna be a force to reckon with.”

He already is. The next step for Corniche, winner of a Del Mar maiden on his debut and just one of Baffert’s battalion of two-year-old aces this autumn, will take him back to Del Mar on November 5, when he is again likely to be favourite to seal divisional honours.

The American Pharoah offered points on the Road to the Kentucky Derby, but Baffert’s horses are ineligible for both qualifying points and the Derby itself.

It certainly looked pretty easy as Ain’t Easy turned the established two-year-old distaff form on its head with a comfortable victory in the Chandelier.

Odds-on favourite Grace Adler had demolished the field in the Grade 1 Del Mar Debutante on her previous start, but she was never at the races here. Electric Ride set the fractions with Ain’t Easy ($9.00) sitting on her tail, until Joel Rosario got a dream run up the fence and put Ain’t Easy’s head in front at the start of the turn.

Nothing was able to come from off the pace, and Rosario gently encouraged Ain’t Easy to extend her advantage through the stretch, which she did willingly to hit the wire four and three-quarter lengths clear, stopping the clock in 1:45 and one-fifth. Electric Ride held on for second place, a length and a quarter ahead of the winner’s barnmate Desert Dawn. Grace Adler was a weary fifth.

“She just looked like she was having fun in the stretch,” said trainer Phil D’Amato. “I think it set up perfect, a good two-turn experience, confidence booster, an easy win where it didn’t look like she was taxed too much. Hopefully, she can do it again next month.”

Next month is the Breeders’ Cup Juvenile Fillies, for which Ain’t Easy – a Del Mar maiden winner stepping right up, just like Corniche – earned a fees-paid berth with this success.

The reopening of the Santa Anita hill turf course after a closure of more than two years was a feature of the opening day of the meet, and Lieutenant Dan evidently relished the unorthodox ups and downs when powering his way to a narrow victory in the Eddie D.

Lieutenant Dan, trained by Steven Miyadi and a 2-1 favourite at the windows, was upsides the fierce pace set by Charmaine’s Mia until taking over on the lead as the field crossed the dirt at the top of the stretch. The five-year-old was driven clear by rider Geovanni Franco, who then had to keep him up to his work as the posse closed in, but he had enough in hand to take it by a half-length from Snapper Sinclair, with Chaos Theory a neck away third.

“He’s a pretty fast horse and he’s very versatile,” said Franco, whose mount covered the distance in 1:11 and four-fifths. “He took me through the trip and just kept on going. It was a great feeling to ride the hill again; it is definitely different from any other race or surface. You have a lot of fun out there, especially when you have a horse like this one.”

The Eddie D does not offer automatic entry to the Breeders’ Cup, but connections intend to pay the $100,000 supplementary fee to put Lieutenant Dan into the Turf Sprint.

One Timer does it again

Another ticket was punched for Del Mar next month when One Timer stretched his unbeaten streak to three with a comfortable victory in the black-type Speakeasy, earning himself a free pass to the Breeders’ Cup Juvenile Turf Sprint.

One Timer ($5.80), a gelding trained by Larry Rivelli, ran the rail and shared a blistering pace with Forbidden Kingdom until easing away from that rival around the turn, and was in command down the stretch, with the late-running Time To Party getting within three-quarters of a length but never posing a serious threat. Forbidden Kingdom was third, two and a half lengths back.

“He broke well, I had to ask him out of there, but he’s pretty professional, he loves to run,” said jockey ET [Edward] Baird of One Timer, who was racing for the first time on turf after winning at Arlington and Woodbine on synthetic tracks, and who stopped the clock in 0.55 and two-fifths. “He took to the turf great and just kept running true.”

Follow us on Social Media for Santa Anita Recap and more updates!