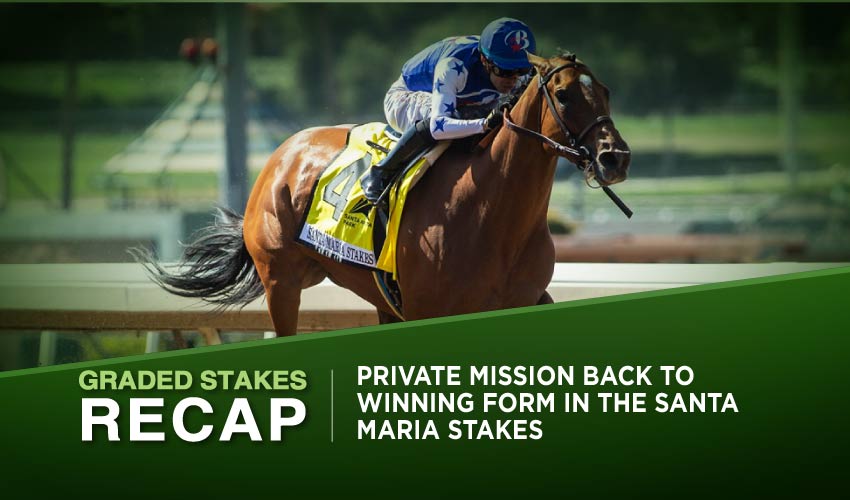 Bouncing back in style after a dry spell, Private Mission notched her fourth victory from six starts at Santa Anita when toughing it out to win the Santa Maria Stakes, the feature event of closing weekend at the Los Angeles venue.

The 7-5 slight favorite pressed the pace set by Lady Mystify before taking a narrow advantage around the far turn. Quickening clear at the top of the lane, Private Mission opened up a three-length gap that proved crucial as she then had to turn back the game rally of second-choice Blue Stripe, eventually getting the job done by three-quarters of a length. Varda, barnmate of the winner, held third spot a half-length back; the time was 1:43 and two-fifths.

“She broke really sharp and then she relaxed, and she was just waiting for me to ask her to go,” said jockey Juan Hernandez, the leading rider at the long Santa Anita meet. “I’m really happy because I’m doing really well. I want to thank all the owners and trainers for supporting me, I really appreciate it. I just love to ride horses and win.”

This was the first success for Private Mission since she scored over course and distance in the G2 Zenyatta in October, with last place in the G1 Breeders’ Cup Distaff after setting a destructive pace and then two defeats in sprints muddying her previously fine record. Her resume now reads five-for-nine, and connections will try to get the daughter of Into Mischief some G1 laurels now she has underlined that a two-turn mile is what she needs.

“She was sitting in the perfect spot,” said trainer Sean McCarthy, saddling the mare for the first time following her transfer from Bob Baffert’s barn. “Then it was just a matter of whether she was good enough, and she was.”

The race is not always to the swift; in a field of tortoises, solid and steady can win the day, and so it was for Breakpoint in the marathon San Juan Capistrano at Santa Anita on Sunday.

There is nothing flashy about the five-year-old, who won three G1s in his native Chile, but he’s a good grinder and the 9-1 shot ground down his rivals with a fine front-running performance, taking it up inside the first quarter and hanging in there at the business end to beat the rallying favourite Red King by a head, stopping the clock in 2:47 and two-fifths. Avenue, also closing late, was a half-length back in third. Red King was trapped between horses for much of the stretch run and could be considered an unlucky loser.

“He’ll run all day long,” said jockey Tyler Baze. “He doesn’t want you to take a hold of him, he’s a free-running horse. I asked him to pick it up around the turn and he just kept plodding along. He galloped out strong, way ahead of everybody. I’d say the further he can run, the better.”

This was Breakpoint’s first start for trainer Neil Drysdale – having been trained briefly by Chad Brown and Steve Asmussen – and his first victory in the US in five races, having failed to hit the board in his previous outings. His wins in Chile were gained between a mile-sixteenth and a mile and a half, but given this stamina-packed performance the astute Drysdale might consider campaigning him in Europe at some stage, where the long-distance programme is better catered.

“He was a nice horse in South America,” said Drysdale, for whom this was a fifth victory in the San Juan Capistrano, his first since 2012. “It’s good to see him come back to life.”

Harry’s in a hurry

Relocation from Europe to the US doesn’t work for every horse but it has been the making of Hong Kong Harry, who took his Californian winning streak to three when making his stakes breakthrough in the American.

The 2-1 favourite was never far from the pace set by Kentucky Pharoah and responded well when Ramon Vazquez asked him the question. Hong Kong Harry split horses at the top of the lane and surged into the lead, rolling under the wire with more in hand than the official margin of three-quarters of a length, covering the mile in 1:33 and four-fifths.

The longshots Homer Screen and Tarantino, separated by a length, took the place and show slots, while last year’s G1 Pacific Classic winner Tripoli came home fourth in an unusual spot for an accomplished dirt/route runner.

“He’s got a big heart and is a horse who has always trained with a lot of ability,” said trainer Phil D’Amato, setting the seal on his status as leading trainer at the Santa Anita winter/summer meet. “I think gradually bringing him through his conditions and building up his confidence has made the difference, and hopefully we can keep going up the ladder.”

Hong Kong Harry, who won four of seven races in Britain and supplied Yorkshire trainer Richard Fahey with his 3,000th win, cost current connections a bargain 85,000 guineas (approximately $120,000) at auction in October. He began his career Stateside with two wins in allowance company at Santa Anita, and with this victory offers hope that his fast-track progression still has some way to go.

D’Amato is now pointing the gelding towards the G2 Eddie Read over a mile-eighth at Del Mar on July 31; he was no more than a middle-of-the-road horse in Britain, but he’s in the fast lane now.