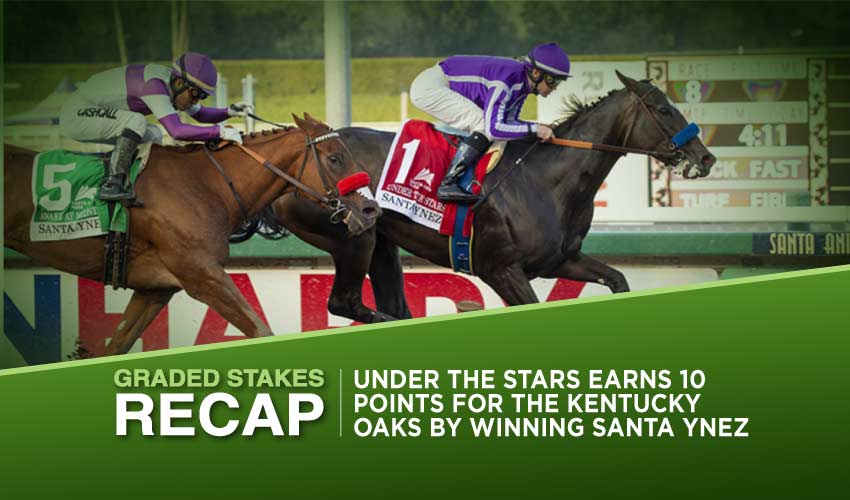 Two very different trainers were in the spotlight at Santa Anita at the weekend, with Bob Baffert taking his usual place on the scoreboard with Under The Stars in the Grade 2 Santa Ynez Stakes, before rookie Ruben Alvarado landed his first win at Graded level when Zero Tolerance took out the Grade 3 Las Cienegas.

Baffert over the moon with Stars

When you’re hot, you’re hot, and Bob Baffert is on fire right now. He is dominating the Santa Anita meet, and added another Graded stakes to his tally when Under The Stars gave him his third successive – and record seventh overall – victory in the Santa Ynez Stakes on Saturday.

The impeccably bred filly, a daughter of Pioneerof The Nile and a half-sister to Kentucky Derby runner-up Bodemeister, made her stakes breakthrough with a gritty performance, demonstrating toughness and talent in equal measure. The 4-5 favourite was away smartly from her inside post and allowed Miss Mattie B to dictate until taking over moving off the turn, whereupon she immediately had to deal with a strong challenge from Awake At Midnyte.

Awake At Midnyte got within half a length at the sixteenth pole, but Under The Stars put her away to win with a little in hand by three-quarters of a length, stopping the clock in 1:22 and one-half. The pair had drawn clear, with six and a half lengths back to Miss Mattie B in third.

“I didn’t know what to expect before the race, but she broke well and I used that to my advantage,” said jockey Flavien Prat. “She really dug in. It was nice to see her do that, and the seven furlongs were perfect for her.”

The Santa Ynez is a ten-point pitstop in the Road to the Kentucky Oaks series, but horses trained by Baffert are ineligible for qualifying points. Under The Stars is now two-for-four lifetime and is likely to step up to a mile on her next start.

Zero’s the hero for Alvarado

A day later, in contrast to Baffert’s customary successes, trainer Ruben Alvarado sent out his first Graded winner when Zero Tolerance toughed it out through the closing stages to win the Las Cienegas.

Alvarado is a former assistant to Peter Miller, who is taking a break from training, and hasn’t wasted any time in making his mark with the grey four-year-old filly. Zero Tolerance, the 2-1 second-choice, sat just off the pace set by the favourite Hear My Prayer, went past her at the eighth pole and dug in gamely under Flavien Prat to hold off the late thrust of fellow grey Tapwater by a head. She covered the distance in 1:13 and one-fifth, while Hear My Prayer held on to third place, a length and a half further back.

“Unbelievable,” said Alvarado, whose filly was taking her lifetime record to four-for-six, and like her trainer was winning her first Graded contest.

“I’d like to thank my owners. It’s been great. It’s just a dream. I feel like, wow. Is this real? I just thank God and I’m just so happy and want to keep winning races.”

Follow us on Social Media for Santa Ynez Stakes updates!