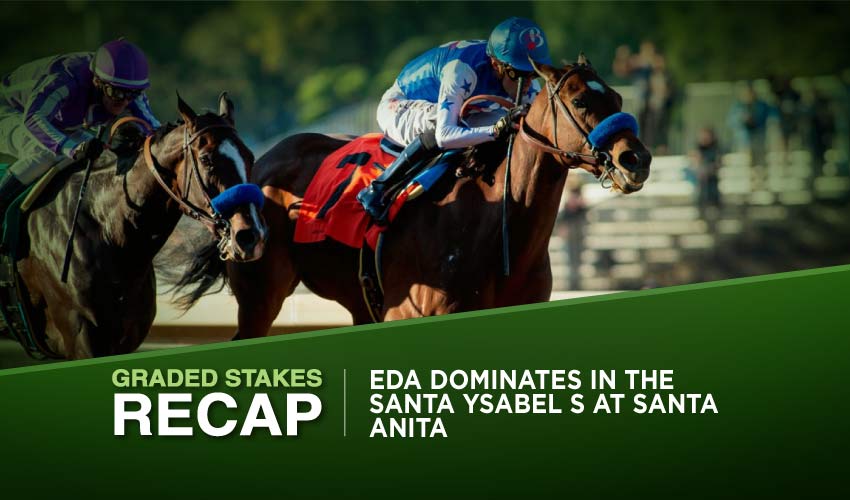 Bob Baffert held all the cards in his bid to win a sixth Santa Ysabel S, the feature event at Santa Anita on Sunday, but the horse who came up trumps was not the one generally expected. All the support was for even-money favourite Under The Stars, but she could never really get to grips with barnmate Eda, who took them coast-to-coast and never looked in any real danger of defeat.

Eda was coming off a Grade 1 score in the Starlet at Los Alamitos and took the race by the scruff of the neck from the gate, bouncing out and quickly on the lead ahead of Under The Stars and Ain’t Easy, and the order hardly changed all the way around. Eda went for home from the top of the lane and although challenges came early from Ain’t Easy and late from Under The Stars, the 3-1 joint-second-choice put them both away and hit the wire a half-length ahead, stopping the clock in 1:44 and two-fifths. Under The Stars had three and three-quarter lengths to spare over Ain’t Easy, who flattened out from mid-stretch.

“She was comfortable the whole race, she broke really sharp today and I got a good position,” said winning jockey Juan Hernandez. “I asked her around the quarter pole when I felt the inside horse and the outside horse closing in. I told her it was time to go and she picked it up pretty good.”

This victory gave the Munnings filly a record of five-for-seven lifetime and took her winning streak to four, all in stakes. Obviously neither Eda nor Under The Stars were eligible for the 50-20 ‘Road to the Kentucky Oaks’ points split for first and second, and one or both fillies may now be pointed towards the Grade 2 Santa Anita Oaks on April 9.

Cezanne for the money

When a horse costs $3.65 million, plenty is expected of him. Before the San Carlos at Santa Anita on Saturday, Cezanne had repaid hardly any of that outlay and not a lot of the faith, but after the race, he could point to contributions on both sides of the ledger.

Owned by the Coolmore empire and trained by Bob Baffert, who also combined on Saturday with As Time Goes By in the Grade 1 Beholder, Cezanne posted the biggest win of his career on just his sixth start, the lightly raced five-year-old a slow burner who is just beginning to spark. He was bought as a two-year-old in training, but didn’t start until the June of his three-year-old campaign and ran just once last year.

In a race reduced to six runners and somewhat diminished by the scratchings of last year’s winner Brickyard Ride and Eight Rings, Cezanne was a prohibitive 3-5 favourite and performed as such, pressing the pace of Canadian Pride until easing past that rival on the crown of the bend.

The longshot Principe Carlo emerged as a threat but briefly, as Cezanne turned him back without too much of a struggle and kept on well under Flavien Prat to win by two and a half lengths, covering the seven furlongs in 1:23 and two-fifths. Canadian Pride plodded on for third, six lengths back.

“He came back like it was nothing. This is not his distance,” said Baffert. “He’s a big, heavy horse who needed his first run of the year, and I think he wants to stretch out.”

Cezanne was taking his record to four-for-six, three of those wins coming at Santa Anita. The winner’s share of the purse for the San Carlos was $120,000; Cezanne has a long way to go to repay his purchase price, but he’s making the instalments now.

Phil D’Amato was another trainer to scoop a Graded-stakes double at Santa Anita on Saturday, with Frank E Kilroe winner Count Again completing what the speedy grey mare Leggs Galore had started in the Buena Vista.

The five-year-old daughter of Bayern doesn’t usually work the mile beat, all but one of her wins coming in sprints, but the 2-1 joint-favourite left the gate like she had somewhere to be and jockey Ricardo Gonzalez simply turned her loose.

“I didn’t want to look back,” said Gonzalez. “I knew she was comfortable and I let her do her thing. I was just hoping I’d get to the wire. I knew it would be close.”

It was. Leggs Galore was eight lengths clear at halfway, but the posse began to close through the eighth pole and the other joint-favourite Going To Vegas threw down a sturdy challenge, but Leggs Galore had enough in her legs to hold on by a half-length, covering the mile in 1:34 and one-fifth. There was three-quarters of a length back to Closing Remarks in third and the same distance to Mucho Unusual in fourth, a frantic finish that hadn’t looked likely around the turn, as D’Amato admitted.

“That was a pretty ambitious move,” he said. “I was holding my breath there. I was just waiting for the wire to arrive. We got it done, and she’s taken another step up.”

This was the first success at Graded level for Leggs Galore, although she also has four stakes wins on an enviable eight-for-13 resume. Six of those victories have come at Santa Anita, and now that she has shown she can stretch out as well as sprint, she has plenty of options in both open company and state-bred affairs.

Follow us on Social Media for Santa Ysabel S updates!