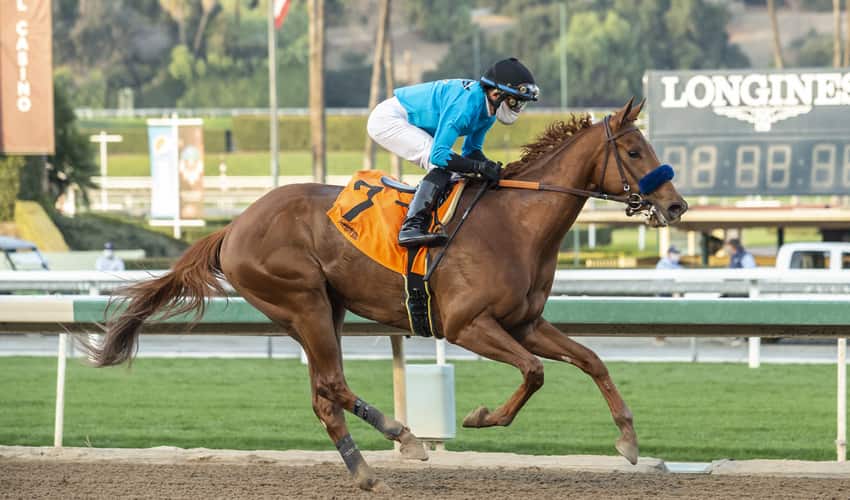 Five sophomore fillies are set to run 1 1/16 miles in the Grade 3, $100,000 Santa Ysabel Stakes at Santa Anita on Sunday. The winner will receive 50 Kentucky Oaks qualifying points, while the second-, third-, and fourth-place finishers receive 20, 15, and five points, respectively.

The Santa Ysabel Stakes field is being headlined by Hall of Fame trainer Bob Baffert’s Kalypso. Owned by David Bernsen and Rockingham Ranch, the Kentucky-bred filly is the daughter of Brody’s Cause.

On Oct. 18, Kalypso broke her maiden, going six furlongs in the Anoakia Stakes. Following that performance, she finished second after being beat by 1 1/2 lengths in the 1 1/16-mile Starlet Stakes (G1) at Los Alamitos on Dec. 5.

Kalypso broke as the 4-5 favorite in the Santa Ynez (G2) on Jan. 3, covering seven furlongs. The runner pressed the pace and pushed forward to cross the wire 1 3/4 lengths ahead.

Her next race came in the Feb. 6 Las Virgenes Stakes (G3), going one mile, where she entered as the even-money favorite. Kalypso was not able to overcome Richard Mandella’s Moonlight d’Oro, who took the race by 1 1/2 lengths.

The Santa Ysabel Stakes will be Kalypso’s seventh career start and her third at two turns.

Jockey Joel Rosario will join her once again.

Don Alberto Corporation’s Moraz will likely be the second choice in the Santa Ysabel Stakes. She won by an impressive 11 lengths as a maiden covering a flat mile on Jan. 8. Kalypso beat her by 1 3/4 lengths for second in the Las Virgenes.

The son of Empire Maker out of the A.P. Indy mare will break under regular rider Umberto Rispoli in her fourth career start.

Another one of the top challengers in the Santa Ysabel Stakes is Baoma Corporation’s Beautiful Gift, a filly from Medaglia d’Oro.

She has one win and one third-place finish, as the filly makes her third career start. The Santa Ysabel will be her first start of 2021.

In her second start on Oct. 23, the runner came in at 3-5 as she went one mile for the first time. She stalked the early pace and moved up late to win by a half-length.

Her debut race was a third-place run in a Sept. 5 maiden special weight race at Del Mar.

Her connections are confident that the filly is only getting better going into the Santa Ysabel Stakes, and she will be joined by jockey John Velazquez for the first time.

Baffert will also send in Heels Up, who has not raced since Nov. 14 at Del Mar, where she finished third in the Dezi Arnaz Stakes, going 6 1/2 furlongs. It will be the first time the daughter of Twirling Candy stretches out, and it will be her fourth career start.

Drayden Van Dyke will guide Heels Up for the first time.

The entire field for the Santa Ysabel Stakes, listed in post position, includes A Real Hero, Beautiful Gift, Heels Up, Kalpyspo, and Moraz.