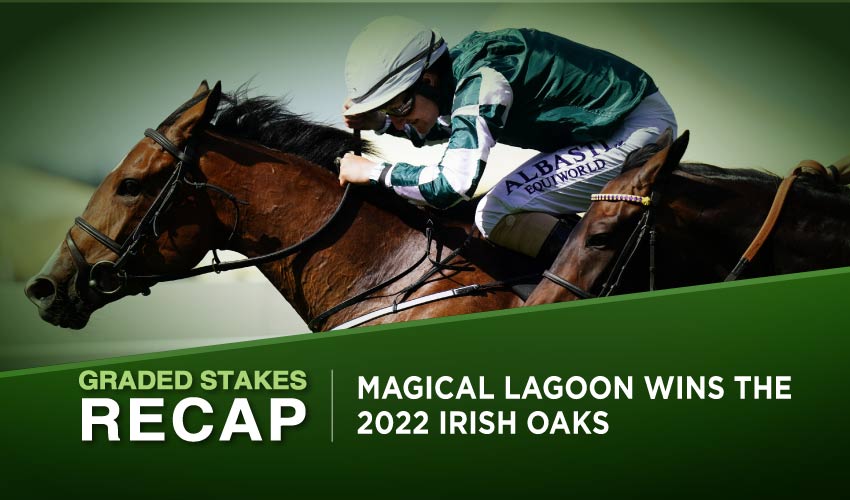 This past Saturday, the Curragh hosted one of the most eagerly anticipated races of the year with this year’s Irish Oaks. In a card loaded with top-quality action join us as we recap the big race itself and the Grade 2 Sapphire Stakes.

The script for this year’s Irish Oaks was flipped on its head when it was confirmed that Tuesday, the winner of the Oaks and Emily UpJohn, the heavy pre-race favorite were both declared as non-runners. With the absence of both horses, this year’s race had a wide-open feel to it.

With just seven horses heading down to post, it was Magical Lagoon for trainer Jessica Harrington that started as the favorite for the race.

In what was a fairly non-eventful start, it was Show of Stars who dictated the early pace, leading up until the three-furlong pole. Magical Lagoon was always up with the pace and eased past the long-time leader and looked to be going best of all.

Tracking Magical Lagoon’s every move was the Aiden O’Brien trainer Toy and as the race looked set for its final stages, it looked like the pair were set for battle.

As the runners hit the furlong pole there were three strewn across the track with Caird Go Deo against the rail, Magical Lagoon in the center, and Toy on the outside. Any of the three could have won, but as they hit the final 200 yards, it was Magical Lagoon who stuck her neck out and did enough to gamely hold on.

Magical Lagoon’s victory was Jessica Harrington’s first in the race and confirms Harrington’s position as one of the finest dual trainers in the game.

12/1 outsider Ladies Church sprang a surprise as he won his first graded race in this year’s Sapphire Stakes.

Ran over the minimum trip of five furlongs, it was a mad dash to the line in what was a wide-open betting heat.

With the pace up front searing, it looked like Mooniesta would claim his second successive Sapphire. Traveling better than all of his rivals, he just couldn’t find enough off the front which opened the door to his rivals Equilateral and Ladies Church.

Both horses flanked Mooniesta but it looked like last year’s winner would do just enough to golf on.

As the line approached it was Ladies Church who seemed to find another gear and lunged late to pip Mooniesta by a short head at the line.

Ladies Church could be a top-class speedster and trainer Jonny Murtagh will aim his winner at some big prizes before the season comes to an end.