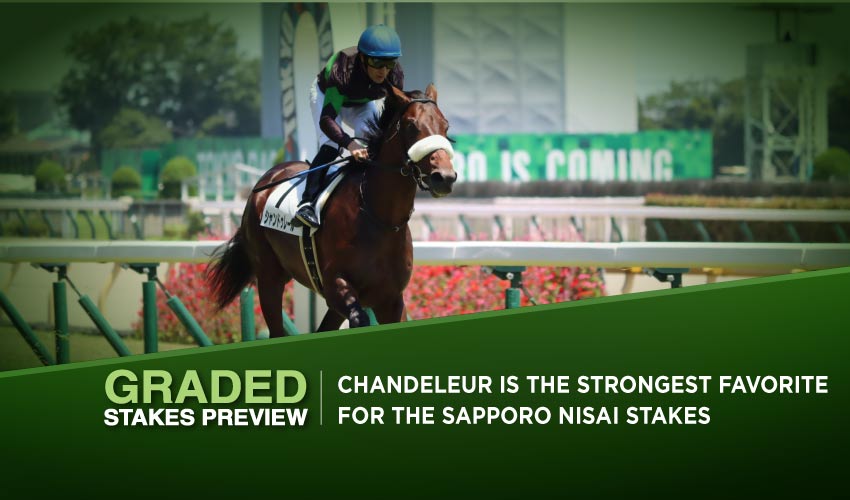 This weekend, three G3 races are held at the Japanese tracks namely at the Sapporo, Kokura, and Niigata Race Course. On Saturday, two-year-olds will clash in the Sapporo Nisai Stakes, while on Sunday, the juniors head into the Kokura Nisai Stakes. Three-year-old and older horses are then bound to compete in the Niigata Kinen on Sunday.

Fourteen two-year-olds will line up in this G3, offering the purse of 59,300,000 Yen. The field will cover the distance of a mile and furlong on the turf surface, with Chandeleur being the first choice. The son of Epiphaneia recorded his maiden in June when he was quick on his feet, pressed the pace, and in the final stretch, he easily resisted any rivals’ attacks.

He seemed suited by the distance of a mile and a furlong, and whenever the jockey asked him, Chandeleur looked ready to give more if needed. The Sakae Kunieda bound colt has only one outing under his belt but boasted lots of talent back then, so he needs to be considered the victorious candidate.

Regarding other interesting participants with just one starts on their resume, Verehrung does look decently as the Gold Ship daughter triumphed in her July debut. She also enjoyed the same trip she’ll hit on Saturday, which applies to Blast Wave as well. However, the Harbinger son prevailed only narrowly when running from the front and might be vulnerable.

Diamond Heights succeeded and broke his maiden in June over the mile-long trip, while the last to mention is Dura. The daughter of Duramente commenced her career with fourth place in a Newcomer race, upon which she displayed some talent among maidens, bagging the triumph despite looking green. She should be the favourite’s main threat here.

Chandeleur, who left the best impression of all, suggesting he has much more to offer.

Another G3 for two-year-olds of the weekend is held over the distance of six furlongs and boasts the purse of 59,280,000 Yen. It attracted a field of thirteen juniors who will hit the turf surface here, with Cri d’Ame probably being the most interesting contestant.

The Naosuke Sugai bound colt has been out twice. After he bagged his maiden over six furlongs, he aimed at the G3 Hakodate Nisai Stakes, where he had a great start at the fence, took command, and only in the final stretch the subsequent victress ran him down. The son of Heart’s Cry should be respected here as he’s the only participant with a Graded experience to him, moreover, a rather solid one because he looked like he belonged in that company throughout the whole race.

Mikatte Yondeii hasn’t seen the Graded contention yet, but she at least delivered at the Stakes level by scoring the Phoenix Sho in August. Back then, the Takeshi Horiuchi trained filly bettered even a hot favourite and bagged the race easily by more than two lengths.

The rest of the field doesn’t have such an experience and usually has ran once but victoriously so. Meisho Kogiku definitely caught the eyes as the Satono Crown filly recorded her debut in August at the Kokura Race Course and managed to score the six furlongs-long Newcomer race by six lengths.

She put on a really superb performance, being quick out of the gate, setting the tempo, and easily drawing clear from her rivals. Meisho Kogiku should be the leading threat for the more skilled contestants here, while Auxo has also broken his maiden quite impressively, winning by five lengths after galloping in third place. The last couple to mention is Newcomer victors, Ballerina and London Plan.

Eighteen three-year-old and older horses will clash in this G3 handicap, offering the purse of 82,700,000 Yen. On the turf surface, the competitive field will cover the distance of a mile and a quarter, and because the participants are about to carry different weights to sort of equal their chance to strike gold, usually half of the horses could be considered possible victory candidates.

Or at least they appear to be viable place contenders, with The only three-year-old in the field looks quite appealing here. Feengrotten has eight starts under his belt, winning three of them, including the G3 Radio Nikkei Sho in July. The Hiroshi Miyamoto trained colt scored only a maiden as a junior, while in 2022, he failed to impress in Class 1 but later on, he achieved a decent third place at the Stakes level, where he bagged victory in his following attempt.

The distance of a mile and quarter suits him, and because he’ll carry a smaller weight than some of well-known performers, the son of Black Tide must be respected here.

Besides Feengrotten, we need to mention six-year-old Karate, who is, naturally, much more experienced but still has only one G3 win on his resume. He achieved it back in February 2021, upon which the Yasuyuki Tsujino bound horse placed twice at the G3 scene and won a Listed, while in February 2022, he delivered a shockingly good performance in the G1 Nakayama Kinen.

Back then, Karate didn’t manage to defeat only Panthalassa. His two subsequent outings weren’t as interesting, but Karate is a good Graded horse together with Heat On Beat who always tries his best and shouldn’t be discarded in almost any race he enters.

Last time out, he got bettered by Echt, while the last to mention is Explosion, a progressive four-year-old colt with four Stakes wins to him.

Niigata Kinen Betting Choice Feengrotten, who should enjoy both the trip and carried weight.