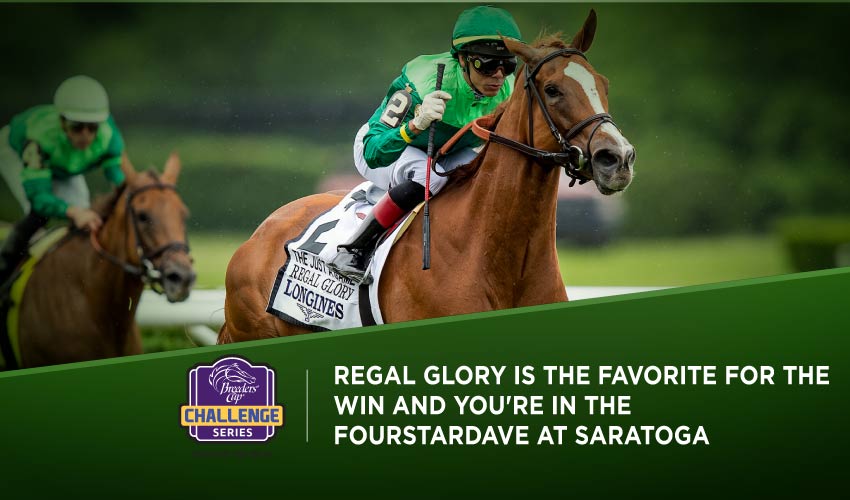 Old Saratoga favorite Fourstardave – he’s actually buried in the infield – is commemorated at the Spa on Saturday, when the G1 named after him is the main event and features a strong entry from meet-leader Chad Brown, who has the top two on the morning-line with Regal Glory and Masen. The highlight of the undercard is the G2 Saratoga Special, which brings together the unbeaten and hugely promising pair Gulfport and Damon’s Mound.

We have seen several high-class fillies take on males this year, notably Secret Oath in the Preakness and Nest in the Belmont, and this battle of the sexes is front and centre in the Fourstardave, the highlight at Saratoga on Saturday and a win-and-in for the Breeders’ Cup Mile.

She’s a top-class mare too, Regal Glory in the form of her life on a four-race winning streak that includes three G1s – the Matriarch over a mile at Del Mar, the mile-sixteenth Jenny Wiley at Keeneland, and the Just A Game over a mile at Belmont Park. Regal Glory likes to be prominent, she led all the way in the Matriarch, pressed the pace in the Jenny Wiley, and was only far back in the Just A Game because there was a headlong speed duel going on that she wanted no part of.

Can she extend her streak against males? There’s no real reason why not, and the mare Got Stormy won the Fourstardave in 2019 and 2021, so there is plenty of precedent to follow. Regal Glory is unbeaten in three at Saratoga, all stakes, should have plenty of pace to run at, and hails from a barn that leads the meet this summer and enjoys utter dominance in the turf distaff division.

Her trainer Chad Brown has never won the Fourstardave – remarkable given his Saratoga dominance – and also sends Masen to the gate. The Irish import has hardly put a foot wrong in three starts Stateside, beaten by a nose in the G1 Maker’s Mark Mile at Keeneland and winning the G3 Poker over a mile at Belmont last time, when he beat overmatched rivals with relative ease.

This will be much tougher but he’s on the upgrade, and will be near the pace that is likely to be set by Get Smokin, who excels at a mile on turf but has not been at his best this year. He’s riding a five-race losing streak, and last time was in a position to win the G3 Forbidden Apple over course and distance but had no kick through mid-stretch. If he couldn’t get that done, it’s hard to see him making it stick now up in class, and he’s zero-for-four at the Spa.

The late closer Casa Creed is bidding for third time lucky in the Fourstardave, having filled the show spot for the last two years. A mile is his absolute maximum distance, as he usually works the sprinting beat and pretty effectively too, landing back-to-back victories in the G1 Jaipur over six furlongs at Belmont on his most recent outing. Stretching out again may not be the right option.

Class is the big issue for Front Run The Fed, who has never won at Graded level. He landed a little sprint stakes at Colonial Downs last month and back in 2019 won a stakes over course and distance, but he looks out of his depth today.

The in-form mare REGAL GLORY has so much in her favour – track, distance, barn, class – and is expected to stretch her winning streak to five.

Two very promising, very interesting juvenile colts head up a short field for the Saratoga Special, and something has to give.

Steve Asmussen has won this race five times and bids for a record-equalling sixth with Gulfport, a son of Uncle Mo out of a sister to a G1 winner, who cost $275,000 as a yearling and has recently been bought into for considerably more by the Coolmore empire.

Both Gulfport’s wins have been at Churchill Downs, by seven lengths in a five-furlong maiden and then by 12 and a quarter in a six-furlong stakes, the Bashford Manor. His maiden win was just a maiden win, but he truly blitzed them in the Bashford Manor, leading all the way and drawing right off in the stretch to beat Owen’s Leap, who had himself won on debut under the twin spires.

That was a performance of immense promise, and it’s very hard to imagine Owen’s Leap turning around the deficit of a dozen lengths unless force majeure comes into play.

Main market rival Damon’s Mound is of homelier stock, trained by Michelle Lovell, who has never had a runner at Saratoga, and by first-season sire Girvin. He can run like the wind just as well, though, and did so on debut at Churchill Downs over six furlongs when, despite a tardy start, he was quickly on the lead and cleared right away from the turn to score by 12 and a half lengths.

Runner-up there was Easy Big Boy, who is now a four-race maiden and also finished behind Gulfport on his debut. Gulfport has the edge on experience, but of course Damon’s Mound is full of improvement, and it may come down to the pace, as they can’t both lead and Gulfport has experience of rating behind the speed.

The most seasoned in the race is Valenzan Day, although he had a bad experience when losing his footing at the gate in the G3 Sanford here over six furlongs, and could never get competitive after that. He was beaten in a stakes on his previous start and perhaps lacks the scope of the ‘big two’.

Gulfstream Park debut winner Super Chow led all the way over five furlongs at the Miami circuit, but the runner-up has been beaten since and this represents a steep hike in class, although there is undoubtedly further improvement to come.

Two big reputations at stake and the percentage call is for GULFPORT, already a stakes winner and from a barn with a great record in this race.