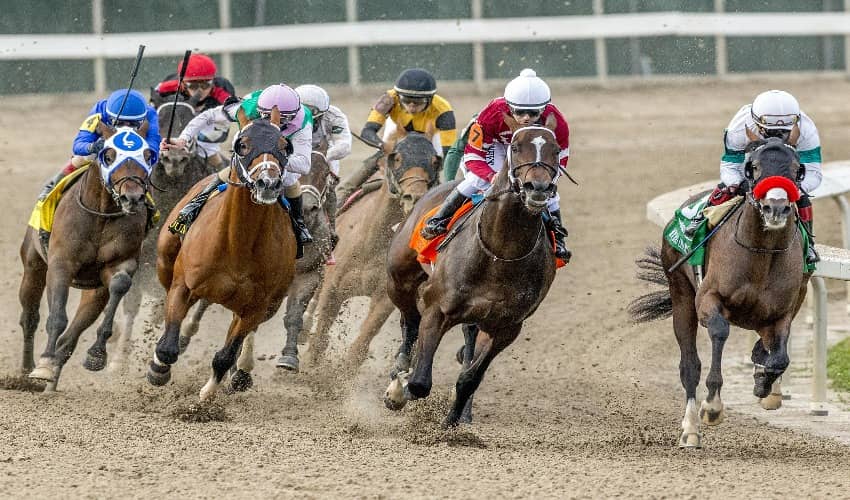 Saturday Horse Racing Results for the March 20th stakes schedule was highlighted by the million-dollar Louisiana Derby; but the day got started at Gulfstream Park.

The 6-year-old Flat Outmare trained by John Kimmel had gone winless in 17 straight starts before capturing the Jan. 23 Inside Information Stakes (G2) under John Velazquez Jan. 23 at Gulfstream.

She came right back to score today in the 6 ½-furlong sprint for older fillies and mares; under a ground-saving ride by Junior Alvarado. The action then turned to the Fairgrounds in New Orleans.

Under the capable hands of Luis Saez combined with the long stretch at Fair Grounds; Chess Chief rallied from last-to-first to defeat favored Owendale. It was the 5-year-old son of Into Mischief’s 1st graded stakes win.

Saturday Horse Racing Results: The victory was the fourth in 23 starts for the Virginia-bred Chess Chief; and it washed away memories of last year’s New Orleans Classic; when he finished third but was disqualified and placed sixth for interference.

Breaking from the one hole; it was Roadster who grabbed the early lead in the 1 1/8-mile New Orleans Classic; with 4-5 favorite Owendale in close pursuit.

He led by a half-length after a half-mile but the one-year layoff caught up with him in the stretch; as Owendale went past him and seemed on his way to victory until Chess Chief came charging on the outside. Owendale settled for second as Enforceable rallied strongly along the rail to take third.

Chess Chief covered the nine furlongs in 1:49.24 and paid $12 to win. Next up on the Fair Grounds card was the Grade 2 Muniz Memorial on the turf.

Colonel Liam returned much the best in the $300,000 Muniz Memorial Handicap; winning his first start since a victory in the Jan. 23 Pegasus World Cup Turf Invitational Stakes (G1T) and extending his win streak to three.  The 4-year-old colt rallied; with a three-wide move and drew clear late under Irad Ortiz Jr. to win by 1 ½ length over 24-1 shot Two Emmys.

The 124-pound high weight in a field of 10, Colonel Liam was sent off favored and returned $3.40 on a $2 win ticket.  Two Emmys ran second, 3 ½ lengths clear of the rest.  Logical Myth eked out third by a neck.  The stage was now set for a pair of wins and you’re in races for three-year-olds.  First up was the Fair Ground Oaks.

Travel Column pressed the pace and drew off in the stretch to score a comfortable 3 length win in the Grade 2 $400,000 Fair Grounds Oaks.

Sent off the 2-1 favorite under Florent Geroux, Travel Column broke sharply from the outside post and shadowed pacesetter Souper Sensational through fractions of 24.35 – 48.64, and 1:12.65 for six furlongs. Travel Column moved up to the leader around the far turn and powered down the stretch to win in a time of 1:42.75 for 1 1/16 miles over the main track.

Clairiere, who edged Travel Column by a neck in last month’s Rachel Alexandra (G2), finished a well-beaten second. She was followed by pacesetter Souper Sensational and Obligatory.

The daughter of Frosted was an $850,000 auction purchase as a yearling by Larry Best’s OXO Equine. Next up on the card was the Louisiana Derby.

It is on to the Kentucky Derby for Hot Rod Charlie, who under Joel Rosario bested runner-up Midnight Bourbon to earn an additional 100 qualifying points toward the first Saturday in May. Midnight Bourbon stalked Hot Rod Charlie throughout, but could never get by and collected 40 points for second giving him 66 in all. Historically that should be enough to make the Kentucky Derby starting gate.

O Besos, the second-longest shot on the board, checked in third and now has 25 points for the Kentucky Derby. He was followed by Proxy in fourth, who added 10 points to give him 34. Hot Rod Charlie contested the Louisiana Derby with Leandro Mora as the listed trainer.

Mora is the main assistant to trainer Doug O’Neill, a two-time Kentucky Derby-winning conditioner, who was serving a suspension for a medication violation in California. In the 1 3/16-miles Louisiana Derby, Hot Rod Charlie carved fractions of 23.10, 47.04, and 1:11.25 for six furlongs along the rail while being stalked to his outside by Midnight Bourbon.

On the second turn, Midnight Bourbon drew on near-even terms with the leader, just as favorite Mandaloun had begun his bid widest of all under Florent Geroux.

Hot Rod Charlie and Midnight Bourbon were side by side entering the stretch, but it was Hot Rod Charlie who proved best to win in a track-record time of 1:55.06. He paid $7.80 as the third choice in the wagering.

Saturday Horse Racing Results from Santa Anita. Returning from a 4 ½-month layoff in a 1 ½-mile graded stakes isn’t the easiest task, but it easier when you have Hall of Fame skills of trainer Richard Mandella calling the shots.

In his first start since an eighth-place finish in the Breeders’ Cup Turf, United his 2021 campaign with a one-length victory in the $100,000 San Luis Rey Stakes (G3T) at Santa Anita Park.

The Victory was the eighth in 18 starts for the 6-year-old gelding, and his first win at 1 ½ miles after two previous starts at the distance, both in the Breeders’ Cup Turf.

Mandella had United sharply for his 2021 debut as the 4-5 favorite in a field of five broke well under jockey Flavien Prat and then stalked the pace-setting Acclimate with United outside and a length back.  Turning for home, United used a burst of speed to draw clear in the stretch. Acclimate dropped back to fourth as Say the Word and Masteroffoxhounds closed in the final furlong. Say the Word posed the biggest threat but was a length short at the wire.  United, who paid $3.80 to win, was clocked in 2:25.51 on firm turf.

Make sure to check Horse Racing Tote for the latest Saturday racing recaps; news and updated odds on the Road to the Kentucky Derby. Follow us on Social Media for instant updates.