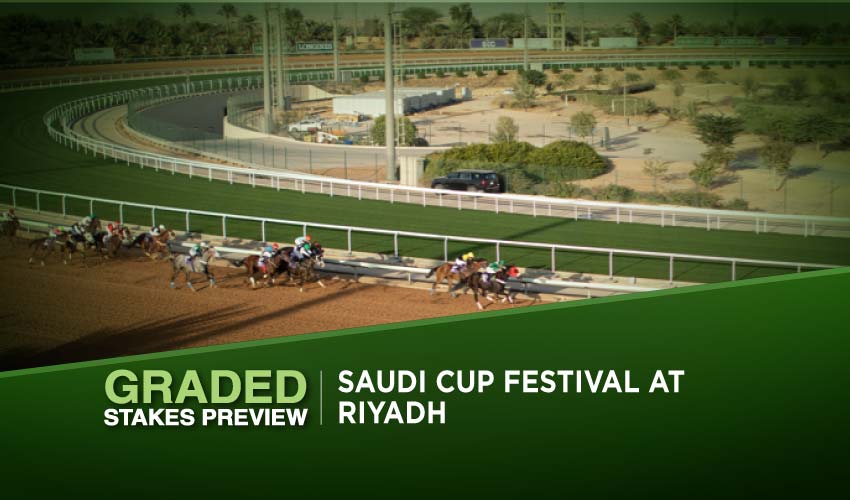 Saudi Cup Festival: Money talks in Saudi Arabia, where the meeting that features the Saudi Cup – the world’s most valuable race – has quickly become established in the international calendar.

Here we preview Saturday’s undercard at Riyadh, which features an intriguing clash between European horses such as Pyledriver, Sonnyboyliston and Naval Crown, and Japanese stars led by Authority, Songline and Dancing Prince, in five turf and dirt races worth a total of $8.5 million.

The majority of races on the Saudi Cup card boil down to a match-up between European horses, including those temporarily trained in Dubai for Godolphin, and Japanese contenders. Local runners tend to lack the class to figure on this world stage. At last year’s Saudi Cup the final score was Europe 4, Japan 2.

This is the case in the opening Neom Turf Cup, in which Grade 1 Japan Cup runner-up Authority and the British Group 1 winner Pyledriver have a distinct class edge over their rivals, with only one other horse quoted at single-figure odds.

Of the two, Authority’s form is arguably superior, given that he got within two lengths of the outstanding Contrail in the Japan Cup at Tokyo in November, in the wake of a comfortable victory in a Grade 2 handicap three weeks earlier at the same venue when conceding weight all round. The main concern is the cutback in distance, as he has shown his best at a mile and a half or more.

That caveat also applies to Pyledriver, who scrambled home in a pretty average renewal of the Group 1 Coronation Cup over a mile and a half at Epsom in June. He signed off last year when runner-up in the Group 1 Hong Kong Vase over the same distance at Sha Tin, finishing two and a half lengths ahead of third-placed Ebaiyra, and although he scored over ten furlongs at Lingfield Park in between, eased down to beat Harrovian by a half-length, it was a weak stakes race.

The remaining single-figure runner is Solid Stone, a reliable Group 3 horse in Britain whose two victories at that level on his last two starts of 2021 indicated that he was at the top of his game. He’ll have to raise that game here, but his trainer is a master with older horses.

Dual Group 3 winner Grocer Jack cost present connections 700,000 guineas at the sales, and his performance when runner-up – albeit beaten five lengths – in a Group 1 in Munich in July should make him of interest to exotics players. The sole US runner, the old boy Channel Cat, was beaten a long way in the Grade 1 Pegasus World Cup Turf last time out and looks up against it here on what is probably his last start before retirement to stud.

Not much strength in depth but two strong principals who are taking a class and distance drop. Slight preference is for AUTHORITY, who ran a lifetime best last time out.

Another Japan-Europe match-up in the 1351 Turf Sprint, with the Europeans holding the edge in the betting market with Naval Crown, who tuned up for this when winning a relatively uncompetitive Group 2 at Meydan last month.

His form in Britain at seven furlongs last year was excellent if unsuccessful, notably when chasing home Creative Force – a subsequent Group 1 winner – in the Group 3 Jersey at Royal Ascot, and natural improvement through maturity from three to four could see him improve a fair bit further. Trainer and rider won this 12 months ago with Space Blues, who went on to win the Breeders’ Cup Mile.

Main market rival Songline has strong claims on her game victory in a Grade 2 over a mile at Tokyo in October and also when runner-up in a Grade 1 against colts in May, beaten only a nose, but she ran inexplicably badly when favourite for a Grade 2 at Hanshin on Christmas Day and needs to bounce back smartly to figure here.

The likely fast ground should suit Pogo, who has yet to win at this level but was only three-quarters of a length behind the classy Benbatl in the Group 2 Joel at Newmarket, and is a likely pace factor. The ground is unlikely to suit Rohaan, who won a hugely competitive 21-runner handicap over six furlongs at Royal Ascot in the mud and may find the extra furlong here a problem.

Irish raider Thunder Moon was top-class at two, winning a Group 1 at the Curragh, but hasn’t been the same since and again disappointed on his seasonal reappearance, while Happy Romance has solid form in the book, such as her fourth in the Group 1 Sprint Cup at Haydock in September, but has done all her best work at six furlongs.

Lone US challenger Casa Creed won the Grade 1 Jaipur over six at Belmont Park in June but has drawn the rail and would need to make a fast getaway, which is not always his forte.

Charlie Appleby and William Buick won this last year with Space Blues and have a similar type in NAVAL CROWN, who has plenty in his favour including good recent form.

Of all the races this afternoon, this is the one almost certainly booked for export to Europe, with a solid cast of route-runners vying for an unusually large purse in the Red Sea Turf Handicap.

Godolphin send three to the gate, with Siskany looking by far the most likely after a cantering win in a stakes over a mile-six at Meydan last month, in which fellow ‘boy in blue’ Dubai Future was a never-in-it fourth, beaten just over seven lengths. That was a major move up for Siskany and there should be more to come. The third Godolphin runner is Desert Fire, who was a longshot winner of a Group 2 over nine furlongs at Meydan last month and is by no means likely to stay this extended distance.

The Irish contingent is strong, headed by top-weight Sonnyboyliston , who made considerable improvement through the second half of last year and ended up by winning the Group 1 Irish St Leger at the Curragh over a mile-six, having too much pace for Baron Samedi , who was nearest at the line in third place, beaten two and a quarter lengths. US racefans will recall Baron Samedi winning the two-mile Grade 2 Belmont Gold Cup in June, and the 5lb swing in the weights from the Curragh may bring the pair together.

Irish mare Princess Zoe ran a huge race when runner-up – beaten five lengths – in the Group 1 Gold Cup at Royal Ascot last summer, the stayers’ crown, with Nayef Road more than 11 lengths back in sixth place, but the ‘Princess’ is markedly better in the mud and this fast ground is unlikely to suit. Nayef Road showed he could do better later in the year, winning a stakes at Newmarket over two miles, and will be sharper for his recent prep on the synthetic surface at Kempton Park.

French pair Skazino and Glycon were three and a half lengths apart when second and third in the Group 1 Prix Royal-Oak at Longchamp in October. Skazino seems reliant on having soft ground and it would be no surprise to see Glycon turn the tables this time.

Sonnyboyliston will be a tough nut to crack despite top weight, but SISKANY hails from an in-form yard and looked a horse going places fast on his most recent start.

The best chance for a US-trained winner on the Riyadh undercard falls to Pinehurst , who is favoured in the Saudi Derby despite not being in trainer Bob Baffert’s top division back in the US.

His fifth-place in the Breeders’ Cup Juvenile has been devalued by the subsequent performances of the rest of the field, but his performance when chasing home Forbidden Kingdom in the Grade 2 San Vicente at Santa Anita last month, although by no means overly impressive, gives him solid credentials on a surface that will make him feel at home.

The opposition is led by another Godolphin trio, with stakes-winner Noble Truth posting by far the best form when runner-up in the Group 1 Prix Jean-Luc Lagardere at Longchamp in October, beaten three-quarters of a length with The Wizard Of Eye two and a half lengths further back in fifth.

Noble Truth lacks a recent run, something that fellow ‘stablemates’ Island Falcon and Sovereign Prince have in their favour, although on last year’s form he is a long way clear of those two and must have shown enough in his work on the synthetics to be given this opportunity.

Japanese contender Sekifu beat recent Hyacinth Stakes winner Combustion at Sonoda over seven furlongs in November but was below that level last time out, and his countryman Consigliere, a narrow winner over this distance on this surface at Tokyo in December, is preferred. He kept his challengers at bay all the way down the long stretch on that occasion, and that willingness will be a handy weapon at this similarly configured circuit.

This cosmopolitan contest is enhanced by the presence of Kiefer, unbeaten in his native Uruguay and runner-up in the Group 3 UAE 2,000 Guineas over a mile at Meydan two weeks ago, although the quick turnaround is a concern.

Betting Prediction for The Saudi Derby:

With Noble Truth trying dirt for the first time, alternatives are preferred, and tough cookie CONSIGLIERE is a sporting choice to see off the obvious threat from Pinehurst.

The late absence of the speedy Ginobili has removed US interest in the Riyadh Dirt Sprint, so the first place to look for inspiration is last year’s running of the race, in which three of the first four home meet again.

Twelve months ago Copano Kicking sprang a mild upset for Japan when rallying strongly through the final furlong to get up close home and win by a neck, the first two having drawn three and a half lengths clear of the late-running Faz Zae in third and a further length ahead of Switzerland in fourth place.

Copano Kicking has failed to advertise the form with three defeats since then, and while Faz Zae has been a prolific winner in the intervening months, the value of those victories against moderate opposition in Saudi Arabia is very much in doubt. Switzerland, on the other hand, demolished the field in a stakes at Meydan last month, clearing away to score by more than nine lengths from barnmate Gladiator King and on that performance can be expected to flip last year’s form.

If Japan is to claim another winner a more likely alternative could be the lightly raced Dancing Prince, who won a Grade 3 at Nakayama over six furlongs on his first outing after a seven-month layoff. He may not appear very often but generally runs very well on his first start back, and a break of two and a half months since his last outing could be sufficient. He is preferred to the mare Chain Of Love, who steps up in class after two good efforts in lesser grade and may find this too tough a spot.

The lone British raider Good Effort finished almost four lengths behind Switzerland in a Group 3 at Meydan 13 months ago, and his two efforts this year, when third on the synthetic tracks at Lingfield Park and Newcastle, give him a chance of hitting the board.

Japan holds a very strong hand here, headed by the in-form DANCING PRINCE, who tends to run best when fresh and has a touch of class that many of his rivals lack.