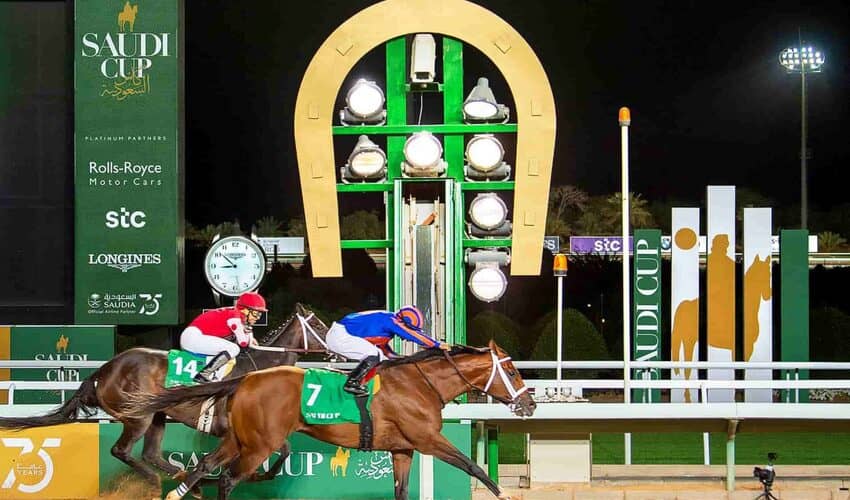 The Saudi Cup is the world’s richest race, with the 2021 edition hitting the $20 million mark. Running on Feb. 20, the Saudi Cup racecard has a total of $30.5 million in purses. The races take place at King Abdulaziz Racecourse, Riyadh.

Here is a look at the full Saudi Cup race card:

While the final announcement for the Saudi Cup entries is not out yet, some horses have already received automatic berths into the major race, and the Jockey Club of Saudi Arabia has unveiled a list of entries.

The list includes many of the world’s best runners among a total of more than 100 entries from nine countries for the Saudi Cup itself.

One of the big names being mentioned regarding the race is Knicks Go, the recent winner of the Jan. 23 Pegasus World Cup Invitational Stakes (G1) at Gulfstream Park. With the victory, the Brad Cox-trained runner received an automatic berth into the Saudi Cup.

Another potential runner is Preakness Stakes (G1) winner Swiss Skydiver. The 4-year-old Daredevil filly is trained by Kenneth McPeek, and she is 6-3-1 from 12 career starts with earnings of $1,842,980.

Some of the other leading entries are last year’s fifth-place finisher, Tacitus, along with Shug McGaughey’s two-time G1 victor Code of Honor. Jack Sisterston’s True Timber, who won the Cigar Mile (G1), is another one of the names.

Finishing 10th in last year’s edition under Frankie Dettori, Gronkowski could get another shot at the race. Two other big names are locally trained winner of the 2020 Dirt Sprint, New York Central, and Shaleh Alotalbi-trained Alzahzaah, who’s won his last four starts.

The other big betting race is the $1.5 million Saudi Derby. It has also attracted an impressive list of potential entries, such as the multiple G1 winner Jackie’s Warrior, who finished fourth in the Breeders’ Cup Juvenile.

Hot Rod Charlie, who finished two places ahead of Jackie’s Warrior in that race, is also listed as a potential runner. Another name to look out for is Qatar Prix Marcel Boussac-Criterium des Pouliches (G1) winner Tiger Tanaka.

The Saudi Cup is one of the top horse race betting events in the world, and this year’s edition is set to be highly exciting and competitive.