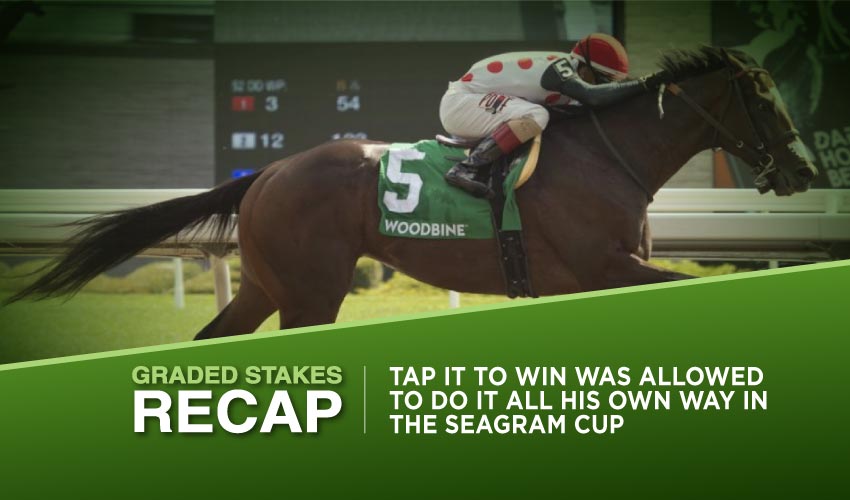 Give someone an inch and they’ll take a mile. Give a horse an easy lead and he’ll take a mile and one-sixteenth. Tap It To Win was allowed to do it all his own way in the Seagram Cup at Woodbine on Saturday and that was the ballgame.

The race was expected to be another carnival day for the public favorite Mighty Heart, the one-eyed wonder, winner of two legs of last year’s Canadian Triple Crown. His adoring public sent him away at very short odds to see off his four rivals, but as soon as the quintet left the gate there must have been doubts among the faithful.

Tap It To Win was fast away, but that was the end of the speed. As soon as he had the lead, jockey Rafael Hernandez slowed the game down, dawdling through early fractions. All the time, Mighty Heart sat about three lengths off him, jockey Daisuke Fukumoto putting no pressure on the front-runner, which was a little hard to understand. Mighty Heart had led at every call when winning the Grade 3 Dominion Day in July over course, distance, and surface, and the benefits of an easy lead are obvious.

Tap It finds way to win the Seagram Cup

A slow pace always favors those on the front end, because when the pace eventually quickens all the runners quicken at the same time, and it’s hard to make up ground. As Tap It To Win moved into the stretch Hernandez gave him the let’s-go, and the four-year-old son of Tapit went. Mighty Heart tried gallantly to close the gap but it was all in vain, and the reigning Horse of the Year looked even a little slow as Tap It To Win maintained his advantage.

He had a length and three-quarters in hand over Mighty Heart at the line, with Special Forces half a length back in third in a race in which the positions barely changed at all from gate to wire. The time was a leisurely 1:43 and four-fifths, and Tap It To Win paid off at $11.40.

“They told me ‘Raffi, just get to the lead. Do your thing there. Put him on the lead and the rest is up to the horse’,” Hernandez told the Blood-Horse. “When I looked back turning for home, I said ‘If they have something, they have to run faster than me because I still have plenty.”

He had enough, which is all you ever need. Tap It To Win, trained by Mark Casse, who saddled four winners during the afternoon including Not So Quiet in the black-type Vice Regent, was making his first start on Tapeta and posting his first graded-stakes success after some honest performances in defeat, notably when runner-up in the Grade 1 Allen Jerkens at Saratoga and fifth in the uniquely shortened Belmont Stakes last summer.

His gift-wrapped victory continued a purple patch for the family, as his year-older half-brother Souper Stonehenge (by Speightstown), also trained by Casse, has won twice at this Woodbine meet, in the Grade 3 Jacques Cartier in June and Grade 3 Vigil last month.

Follow us on Social Media for instant Seagram Cup updates!