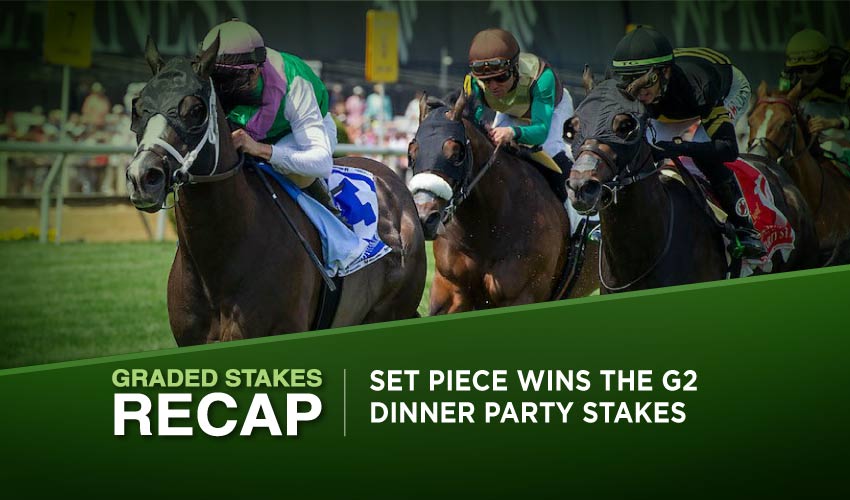 The Preakness undercard at Pimlico on Saturday featured several notable performances, headed by the return to form of Set Piece in the G2 Dinner Party. It was a very big day for Chad Brown and Jose Ortiz, who embellished their Preakness success with victory for Technical Analysis in the G3 Gallorette, while speed horses Lightening Larry (G3 Chick Lang) and Jaxon Traveler (G3 Maryland Sprint) both gained their first wins at Graded level.

Set Piece back in business

Class relief and a classier attitude propelled Set Piece back to the winner’s circle at Pimlico on Saturday, the six-year-old bouncing back from a quiet spell to gain his first win for almost a year in the Dinner Party.

Three G1 defeats and a rank effort in the Maker’s Mark Mile hadn’t put bettors off, though, and the 2-1 favorite justified their support under a patient ride from Florent Geroux, who kept Set Piece a way off the pace set by second-choice Atone until delivering him to challenge six wide as they straightened for home.

He closed swiftly, took the lead, and kicked away to win by a length and a quarter from Tango Tango Tango, with Atone a neck back in third. The time was 1:41 and three-fifths. “I just kept it simple and let him do his thing in the last quarter of a mile,” said Geroux. “He covered up well and was nice and relaxed. When I tipped him out, I could tell I was going really fast.”

The victory improved Set Piece’s lifetime record to a hugely creditable 50 percent, ten-for-twenty and the only thing missing from his resume is a G1 score. Brad Cox has an eye on rectifying that omission, the trainer indicating that races such as the Fourstardave at Saratoga and the Woodbine Mile – Set Piece was beaten in both last year – could be on the gelding’s agenda again.

Larry lights up the track

It was the pace burn-up we expected and Lightening Larry had too much firepower for his rivals in the Chick Lang, springing a mild 12-1 upset on his way to a first Graded-stakes success.

The first two home were the first two all the way round, with Lightening Larry hanging on to the coat-tails of the slight favorite Cogburn as he sizzled his way through a first quarter in 21.87. At the furlong pole Lightening Larry finally got to grips with the leader and soon took control, Chantal Sutherland pushing him out to win with a little in hand by three-quarters of a length, stopping the clock in 1:09 and four-fifths. Chasing Time, barnmate of the runner-up, was nearest at the finish in third, two lengths away.

“We’ve been training for this race since February,” said trainer Jorge Delgado, for whom this was also a first victory at Graded level. “This is the first time I’ve had a horse in a big stakes like this. It’s a day I’ll never forget.”

Lightening Larry is now four-for-nine and has only once finished outside the first two. It was also a big day for Sutherland, well known for her celebrity on and off the track, who was recording her first Graded win since April 2014.

Analysis stands up to scrutiny

Chad Brown, Jose Ortiz, and owner Seth Klarman warmed up for their Preakness victory with Early Voting when Technical Analysis made easy work of landing the Gallorette, giving Brown his weekly big win in a turf distaff contest.

The four-year-old won as easily as her 3-5 odds suggested she would, going gate-to-wire with some leisurely early fractions before picking up the pace when second-choice Crystal Cliffs moved up to dispute at the top of the lane. Technical Analysis was only idling, though, and she easily turned back the challenge before drawing off to win by three and a quarter lengths, with Crystal Cliffs three lengths clear of In A Hurry in third. The time was 1:41 and two-fifths.

“I was interested to see how she would respond after her first race of the year,” said Brown. “The second race after a layoff will usually tell me where we’re headed, and I think we’re headed somewhere good. We think she’s a Grade 1 filly.”

Technical Analysis, now five-for-nine lifetime and only once off the board, was runner-up in her only G1 to date, the Queen Elizabeth II Challenge Cup at Keeneland. Her schedule will be dependent on targets for other members of Brown’s vast and lavishly talented harem, which includes the unbeaten G2 winner Bleecker Street, G1 winner Regal Glory, and G2 winners Speak Of The Devil and Search Results.

Traveler is happy at home

Local boy made good is a story no-one tires of hearing, and the Maryland-bred Jaxon Traveler continued his love affair with Pimlico when leading at every call in the Maryland Sprint, his first victory at Graded level.

The four-year-old is right at home at Old Hilltop, and took his record here to three-for-four with a blitzing performance, breaking on top and maintaining his advantage all the way around. The 6-5 favorite was harried by longshot Threes Over Deuces at the top of the lane, but put that rival away a furlong out and beat him going away by a length and three-quarters; the stopwatch showed 1:09 and three-fifths. War Tocsin was three lengths away in third place.

“He showed speed from the start so I let him go,” said jockey Joel Rosario, who was sparking a double on the day for himself and trainer Steve Asmussen, although the big one eluded them when Epicenter was beaten in the Preakness. “When the runner-up came to me off the turn, my horse really responded.”

Jaxon Traveler was taking his overall record to six-for-16 and has only been off the board once when jostled at the start of a stakes at Laurel Park. “He shows up every time,” said Terry Finley, CEO of owner West Point Thoroughbreds. “He’s just a beautiful, hard-trying horse.”

Follow us on Social Media for instant Set Piece, and Triple Crown updates!