RACETRACKS CLOSED DUE TO WEATHER 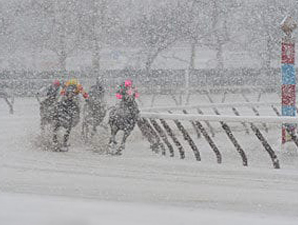 Severe weather has arrived in a big way along the east coast of the United States, which has caused racetracks to close ahead of the storm. New York and Maryland have both been hit hard, so it is perhaps no real surprise that we are already seeing track closures announced on Thursday morning.

Before we continue, take a look at some of the 2021 Kentucky Derby futures & betting odds currently available at JazzSports.ag

Laurel Park Racetrack has already announced that they will be closed on Dec. 17; with the New York Racing Association (NYRA) letting the public know that Aqueduct will also be shuttered for the day.

These were closures that most people saw coming given the weather reports coming out a couple of days ago. Once the National Weather Service announced a winter storm approaching the east coast,; the belief was that the horse racing news for the next few days would not be particularly good.

The New York metropolitan area appears to be taking the brunt of the storm. Which called for high winds, snow accumulation, and potential coastal flooding, affecting Racetracks in the area.

Those winds are expected to hit up to 50 MPH; while residents of the area are looking at 9-12 inches of snow on Thursday, none of which is conducive to horse racing. Aqueduct was set to have an 8-race card on Dec. 17, and while that is now canceled, the NYRA believes that the track will be ready to re-open for business on Friday.

While the weather was not quite as severe in Maryland, snow, sleet, and rain descended on the state and made it impossible for live racing to go ahead as planned. The Maryland Jockey Club quickly announced that racing at Laurel Park Racetrack was canceled on Thursday; although they also made it clear that simulcast locations will remain open on Dec. 17, which is a good bit of horse racing news for fans. Just as in New York, live racing is expected to return to Laurel Park on Friday with a 9-race card.

It is always disappointing to see race cards canceled, but these postponements have been done to secure the safety of horses, jockeys, fans; and all the employees at both tracks.

Follow Horse Racing Tote for more horse racing updates; as well as other news, tips, and results from the sport of kings.