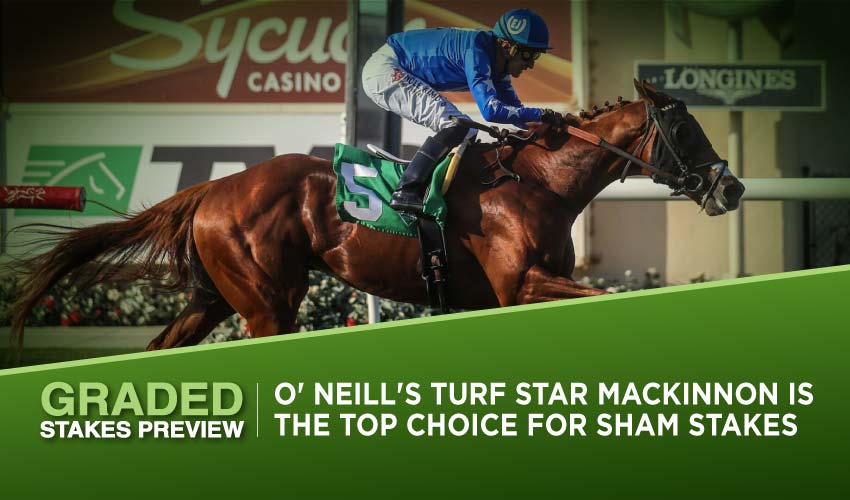 January 1 is the official birthday of every thoroughbred in the northern hemisphere, and a sizeable bunch of brand-new three-year-olds are out to pick up Road to the Kentucky Derby points in three similar races spread right across the country on Saturday. The Sham, the Smarty Jones and the Jerome – all at a mile, all offering points on a 10-4-2-1 scale – will hopefully provide further clarification about which horses might contend for the ‘Run for the Roses’ in May.

Sham was a brilliant horse but had the bad luck to be born in the same year as Secretariat, and winners of the race named after him – run at Santa Anita on Saturday – have in the last couple of years done what Sham couldn’t do, win the Kentucky Derby.

Two years ago Authentic won the Sham and the Derby, and last year Medina Spirit finished second in California before winning in Kentucky. Both horses were trained by Bob Baffert, who has two in the gate for a short-field contest including morning-line favorite Rockefeller, who earned his market position with a thoroughly competent gate-to-wire score in the Grade 3 Nashua over the Belmont Park mile in November.

That followed fourth position in the Grade 1 American Pharoah here over a mile-sixteenth, a race that has worked out very well with the one-two Corniche and Pappacap filling the same spots in the Breeders’ Cup Juvenile. Rockefeller has the chops for this, whereas barnmate Newgrange is stepping up in grade with just a maiden win on his record.

He made much of the running at Del Mar that day, winning by a length and a half, and there’s no doubt he’s ready to move up, but he stretches out another quarter-mile today and is a short enough price for one with questions over his suitability for this test.

The opposite is true for Oviatt Class, whose Grade 1 form doesn’t seem reflected in his odds. He ran third in the aforementioned American Pharoah, doing all his best work late to finish three and a quarter lengths ahead of Rockefeller, and then went on to the Breeders’ Cup Juvenile, where his chance disappeared with a slow start. He was dead last on the turn but kept rolling to be fifth at the wire, a better performance than first glance suggests.

Oviatt Class has a 4lb pull at the weights with Rockefeller from the American Pharoah, and that horse has three and a quarter lengths to make up. On the numbers, he has the measure of the favourite.

The remaining pair are both coming off turf/synthetics, with Grade 1 form in the bank. Mackinnon won a turf stakes over the Del Mar mile and then a turf stakes over course and distance, before closing late to be third in the Breeders’ Cup Juvenile Turf. It’s high-quality form but there’s no knowing whether he’ll be able to reproduce it on the main track, and on his only start on dirt – his debut – he was a well-beaten fourth in a sprint maiden here.

Before hitting the board at stakes level on his last two starts, Degree Of Risk got third spot in the Grade 1 Summer at Woodbine, although Canadian G1 form doesn’t always compare well with US G1 form. He hasn’t moved on since then, though, and this is a tough spot to make his first start on dirt.

Bob Baffert has a strong hand in the Sham, but morning-line favourite Rockefeller has a lot to find with OVIATT CLASS, who is the choice given his strong Grade 1 form.

A big field of potential Kentucky Derby contenders lines up for the valuable Smarty Jones at Oaklawn Park on Saturday, a race named after the 2004 Derby and Preakness winner and a very open contest, with only one previous stakes winner among a host of upgrading allowance horses.

That stakes winner is Kavod, who looked well out of his depth in Graded races in the fall, but who is now bidding for a three-timer after his black-type score here over six furlongs last month, when he showed a good attitude on his first start for trainer Chris Hartman to get the job done in the closing stages. Two and a quarter lengths back in third was Grade 3 Nashua fifth Cairama, one of three in the gate for Steve Asmussen, and another length and a half away in fourth was Remington Park maiden winner Ruggs, one of Ron Moquett’s two contenders.

The morning-line favourite is Home Brew, one of two for trainer Brad Cox, who won last year’s Smarty Jones with Caddo River. Home Brew certainly looked ready to move up when going gate-to-wire over course and distance in an allowance optional claimer, and his experience of going two turns will be an advantage, as it will be for barnmate Vivar, who won an allowance over a mile-sixteenth at Keeneland before finishing a well-beaten longshot sixth behind Smile Happy in the Grade 2 Kentucky Jockey Club at Churchill Downs five weeks ago.

Fourth that day, three and a half lengths ahead, was Ben Diesel, who only lost third place in the last few jumps. That Smile Happy form reads very well in this company and although Ben Diesel will have plenty to do from his outside post position, he has early pace to compensate.

Barber Road missed out by only half a length in a sprint stakes at Churchill Downs, run down by Tejano Twist, who did his bit for the value of the form when runner-up to the promising Kentucky Derby contender Epicenter in a stakes at Fair Grounds last weekend. Barber Road has winning form at a mile-sixteenth and may again be good enough to see off Churchill Downs third Cool Papa G – the shortest-priced of Asmussen’s trio – and last-of-six Ignitis .

The allowance over six and a half furlongs at Remington Park won by the unbeaten Don’tcrossthedevil (10-1) was probably not a particularly good race, but he did tear it up by six lengths and has since moved to Phil D’Amato’s barn, so perhaps there’s further improvement to come. That certainly applies to Dash Attack, who made a successful debut over course and distance a month ago and is worth a look at this level.

You could pick five and still not hit the board in a wide-open Smarty Jones, but HOME BREW has winning form over course and distance and looks capable of finding more.

The Jerome at Aqueduct on Saturday is the second-oldest stakes race in the US, and is named after the grandfather of Sir Winston Churchill. In 2000, Fusaichi Pegasus used the Jerome as a springboard to Kentucky Derby glory.

There is less obvious quality about the Jerome in comparison with the Smarty Jones, as half the field are making their stakes debut. Unbridled Bomber got the job done at the fourth attempt when scrambling home by a neck in a Belmont Park maiden, although with the third horse six lengths back the form may be sound.

An almost identical record belongs to Courvoisier, who also got off the mark on his fourth start when hanging on gamely in the dying strides to score by a neck, and that represents course form here at the Big A, albeit over a mile-eighth. Smarten Up was a much more impressive winner of a maiden at Parx Racing on his third start, drawing right away for a nine-length success over the extended mile, but that looked a moderate contest.

Course winner Hagler is two-for-three, delivering a knockout blow here in an allowance optional claimer over seven furlongs on his most recent start. He led at every call on that occasion and there should be no fears about stretching out to a mile today.

The other four runners already have experience at this level or above, with Cooke Creek dropping down in class after a gallant runner-up effort in the Grade 3 Nashua at Belmont Park over a mile, when he couldn’t get to grips with Rockefeller – who runs in the Sham at Santa Anita today, see above – but had plenty in hand of the third horse.

That performance represented a distinct step up from his previous victories at Delaware Park and Cooke Creek may be going places. That sentiment may not apply to Rumble Strip Ron, who is two-for-eight and zero-for-three in stakes races, and whose runner-up spot behind Kavod – runs in the Smarty Jones at Oaklawn today, see above – in a Churchill Downs claimer last time out indicates that he may be out of his depth here.

Laurel Park allowance optional claimer winner Mr Jefferson turned in a decent showing when fourth behind Mo Donegal in the Grade 3 Remsen here over a mile-eighth last time out, but he was nevertheless ten lengths down the track in a slowly-run race that turned into a sprint. He’ll need more now, while Ohtwoohthreefive tries the main track for the first time after six starts on turf and, although he was only beaten a nose in a stakes here over a mile-sixteenth last time out, he has to show he can adapt to the different surface.

The clear standout on form in the Jerome is Grade 3 runner-up COOKE CREEK, who is a straightforward choice now down in class despite spotting at least 3lb all round.

Make sure to stay tuned for the latest Horse racing odds, Racing entries and Races results. Sign up and get a 10% rebate.

Follow us on Social Media for instant Road to the Kentucky Derby updates!