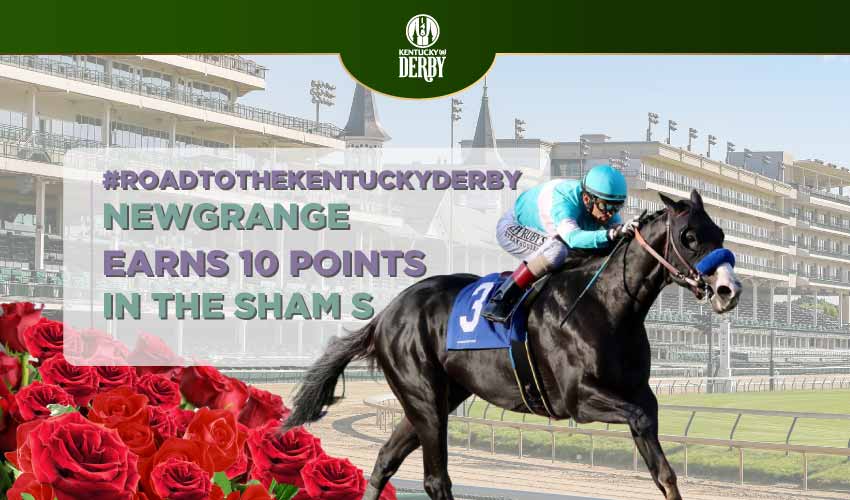 There were Kentucky Derby clues aplenty across the country on Saturday, with Road to the Kentucky Derby points available at Santa Anita, Oaklawn Park and Aqueduct. Another exacta finish for trainer Bob Baffert in the Grade 3 Sham Stakes, with Newgrange and Rockefeller, emphasized the strength in depth of his barn, and the same can certainly be said for trainer Kenny McPeek, whose success in the Smarty Jones with Dash Attack means that he now has four potential Derby colts.

Bob Baffert’s world has changed a lot since the last time he pulled off the exacta in the Sham Stakes at Santa Anita. Twelve months ago Life Is Good led home Medina Spirit, and we all know what happened next. On Saturday Baffert delivered the old one-two again, with Newgrange and Rockefeller, and no-one knows what will happen next.

Just like last year, Baffert’s winner went gate-to-wire, although there were no New Year’s Day fireworks as Newgrange – the 5-2 third-choice in a short field – set Sunday-stroll fractions, towing along his barnmate and 3-2 favourite Rockefeller until cutting the rope at the top of the lane. Nothing was coming from behind, and Newgrange was not unduly pressed to draw off from mid-stretch and win by two and three-quarter lengths, stopping the clock in 1:38 and two-fifths.

Rockefeller held on to second spot by a nose from Oviatt Class, who has no tactical speed but finished his race off best of all. The winner and runner-up are ineligible for Road to the Kentucky Derby points and, at this moment, for the Derby itself, as is by now almost universally known.

“There was only one other speed horse,” said veteran jockey John Velazquez, still riding as well as ever at 50. “He was still green, only his second run, so I took a hold of him and he started waiting for other horses. I let him get in a comfortable rhythm. After that it was pretty easy.”

It was indeed pretty easy, with the set-up of the race making Newgrange almost impossible to stop once he had established a lead. The Violence colt, now unbeaten in two after his debut victory in a Del Mar maiden, has thrust himself into prominence in the second rank of Baffert’s three-year-olds behind Breeders’ Cup Juvenile winner Corniche, and may now come back to Santa Anita for the Grade 3 Robert B Lewis on February 6 or, failing that, the Grade 2 San Felipe on March 5.

“He looked good,” said Baffert. “He had been training really well. The quality is there and I’m happy we have a great team going forward.”

McPeek goes on the Attack

Baffert is not the only trainer out there with an abundance of potential star three-year-olds, and Kenny McPeek can count on a straight run at Churchill Downs. He took his list of ‘Roses’ contenders to four when Dash Attack kept his unbeaten record intact in the Smarty Jones at Oaklawn Park on Saturday.

The Munnings colt doesn’t yet have the high profile of barnmates Smile Happy, Rattle N Roll and Tiz The Bomb, but he is certainly going the right way judged on this authoritative display on a sloppy, sealed track. The 7-1 shot made a slow start and had nothing to do with the early fractions set by Ben Diesel and Ruggs, only beginning his move on the turn and coming seven wide down the stretch, but as soon as he hit the front at the eighth pole the race was over as a contest.

Dash Attack powered clear to win by two lengths from the late-running Barber Road, covering the mile in 1:39 and two-fifths. The longshot Ignitis kept Kavod off the board by a nose, while favourite Home Brew dropped away from the turn to finish tenth.

“I had to move a little earlier than I would have liked,” said jockey David Cohen. “Given the short stretch, it was time to go, and I saw one opportunity to get out of the traffic. I pointed him in that direction and he really turned up his game and turned on the power.”

Dash Attack is now two-for-two over a mile at Oaklawn Park and will stay in residence for his next start, the $750,000 Grade 3 Southwest on January 29, in which he is likely to renew rivalry with Barber Road.

Courvoisier the toast of Aqueduct

It may well have been the weakest of the three RTKD races run on Saturday, but the Jerome still drew a smart performance from Courvoisier, who deepened his love affair with the hard-to-love Aqueduct circuit when skipping over the soggy track to make his breakthrough at stakes level.

The impeccably bred colt – by Tapit out of champion Take Charge Brandi – had broken his maiden at the Big A last time out and stepped right up on a bleak, wintry afternoon at the New York track, hustling the pace-setting Hagler around the turn before joining battle under Jose Ortiz at the top of the lane. At the eighth pole Courvoisier had his head in front and gamely ground out the win, staying out of reach of the late flourish of longshot Smarten Up and rolling a length and a quarter clear at the wire.

Courvoisier covered the mile in 1:38 and four-fifths and paid off at $10; hot favourite Cooke Creek was never able to land a blow and finished third, three-quarters of a length behind Smarten Up.

“He’s still green. He has a lot of talent,” said trainer Kelly Breen. “This was his most professional start. He’s had his game face on ever since he won his first race [last time out] so hopefully the light bulb went on and he’s turning into a racehorse.”

Courvoisier is now two-for-five, and given his evident affinity for Aqueduct it’s no surprise that Breen is targeting the Grade 3 Withers at the Big A on February 5 for his next start. That means a rematch with Smarten Up and Cooke Creek, who will both be suited by the extra furlong of the Withers.

Follow us on Social Media for Sham Stakes updates!