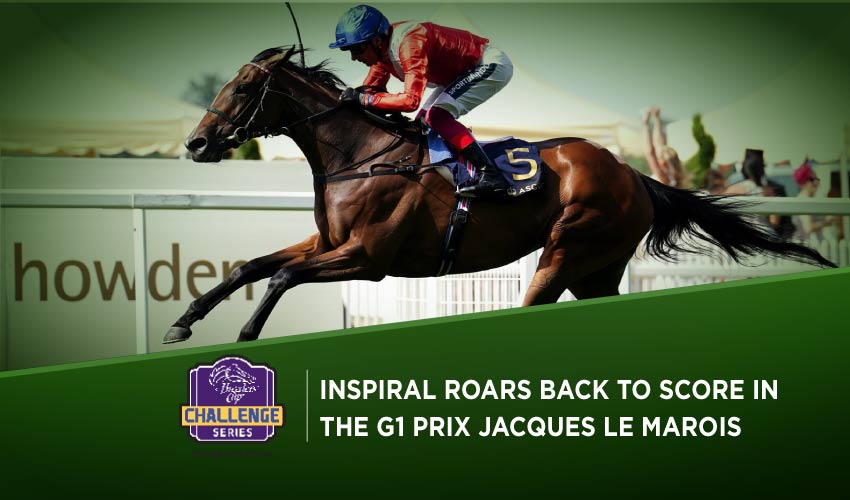 Two Graded races took place at the Deauville Race Course in France, especially the G1 Prix Jacques le Marois, which headlined Sunday’s card. After losing her unbeaten record last time out, Inspiral returned to the winning ways here by bettering Light Infantry, while on Monday, Al Hakeem fulfilled the role of a favourite in the G2 Prix Guillaume d’Ornano.

One of the pinnacles of the whole European summer attracted a field of nine three-year-old and older horses who clashed over the distance of a mile. On the turf surface, Coroebus (8-5) was the favourite of this €1,000,000 G1 event; however, his finish didn’t follow the expectations as filly Inspiral (9-5) landed the spoils in front of Light Infantry (23-1).

The John and Thady Gosden three-year-old travelled in the bunch, but as soon as Frankie Dettori aboard asked her a question, the bay filly accelerated beautifully. In a span of a furlong, Inspiral took command, upon which she denied finishing Light Infantry to deliver by a neck in 1m 34.07s. Erevann (10-1) grabbed third place just another neck behind the second colt.

The champion juvenile filly of 2021, Inspiral, commenced the ongoing season a bit later due to a setback but scored the G1 Coronation Stakes right away. Subsequently, she failed to impress in the G1 Falmouth Stakes even though she finished second; however, her performance simply lacked any sparkle.

On Sunday, Inspiral once again oozed class when cruising home towards her third G1 success before boldly running Light Infantry, another promising three-year-old here together with third Erevann, a G3 winner. Favourite Coroebus didn’t give any powerful kick to actually threaten the leaders and had to settle for fifth place, with five-year-old Order of Australia (18-1) running in fourth.

Six three-year-olds vied for the purse of €400,000 in this G2 turf race, where the participants covered the distance of a mile and a quarter. Preferred Al Hakeen (9-10) basically had a perfect trip here. Piloted by Cristian Demuro, the Jean-Claude Rouget bound bay settled at the rear of the group and improved his position in the final stretch, upon which he took command, yet Junko (32-5) proved to be a worthy rival.

The pair of three-year-olds fought for the victory throughout the closing stages, but at the line, Al Hakeem was eventually the more successful one, scoring the G2 event by half a length in 2m 7.58s. Junko took second place, with True Testament (10-1) finishing third.

By bagging the Prix Guillaume d’Ornano, Al Hakeem scored his first Graded victory so far; he triumphed just at the Listed stage prior that. Still, he finished fourth in the G1 Prix du Jockey Club and was expected to put up another respectable performance, which he did.

Unlike British raider, Missed the Cut (6-4), who was perceived as a fair rival for the favourite, yet he weakened quickly in the final stretch, crossing the wire only in fifth as bold Junko, smart True Testament, and also fourth Vagalame (17-1) passed him by.