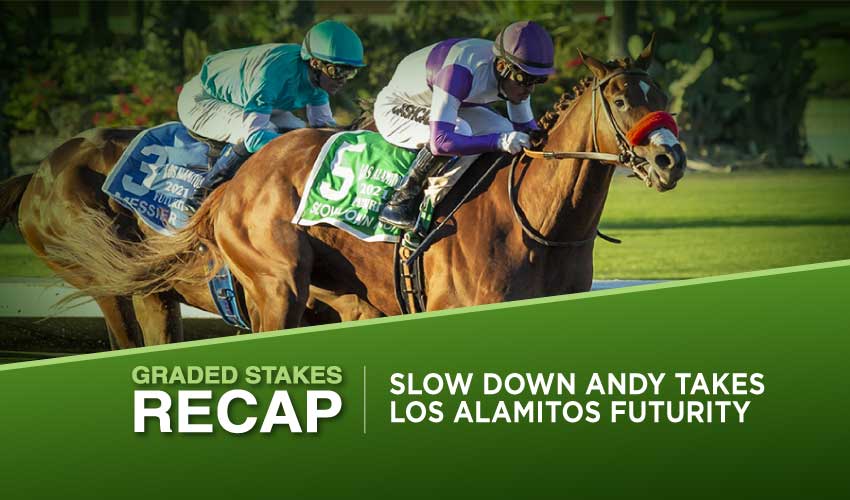 Spring doesn’t seem far away when the focus is on the Kentucky Derby, and the Grade 2 Los Alamitos Futurity, the west-coast feature on Saturday, unearthed another potential leading Roses contender when Slow Down Andy came out on top after an absorbing stretch duel. His trainer, owner and jockey have already won two Derbys together, and all roads will lead to Churchill Downs once again.

Dreams of Kentucky Derbys past and future were kindled at Los Alamitos on Saturday, when the feature Futurity resulted in an upset victory for Slow Down Andy, who saw off the heavy favourite Messier after a stretch duel in which the lead changed hands more than once.

Slow Down Andy is owned by Paul Reddam and trained by Doug O’Neill, who teamed up to win the Kentucky Derby in 2012 with I’ll Have Another and again four years later with Nyquist, who is the sire of Slow Down Andy. Now they have another candidate for Churchill Downs in May, a horse apparently named for a golf partner’s hectic style of play and who was having his first start at Graded level.

Beforehand, all the talk was of 1-2 favourite Messier, bidding to give trainer Bob Baffert his eighth successive victory in the Los Alamitos Futurity, and when he surged towards the lead around the turn all that talk looked justified. There were four across the track at the top of the lane, and it was Slow Down Andy who came through to lead before throwing away his advantage by hanging towards the rail and into Messier.

Messier went on again, but Slow Down Andy dug in to regain the lead and, despite a very awkward-looking head carriage, the 5-1 shot kept on well to win by a length from Messier, stopping the clock in 1:42 and two-fifths. Messier’s barnmate Barossa was third, nine lengths back down the track.

“I think he was just playing around in the stretch,” said jockey Mario Gutierrez, who was in the saddle for both the aforementioned Kentucky Derby wins. “When Messier got back in front of him, he regained his focus and showed his heart.”

Slow Down Andy earned ten points on the Road to the Kentucky Derby with this victory, taking his record to two-for-three on his first time going beyond seven furlongs. He is now a 40-1 chance on the Jazz future book for the ‘Run for the Roses’, with Messier lengthened a notch to 25-1 after this defeat.

I’ll Have Another and Nyquist had different Derby preparations, with the former winning the Santa Anita Derby and the latter taking down the Florida Derby, and O’Neill intends to make plenty of entries for his new star; the Grade 3 Robert B Lewis at Santa Anita on February 6 may well be next on the schedule.

Follow us on Social Media for instant Slow Down Andy updates!