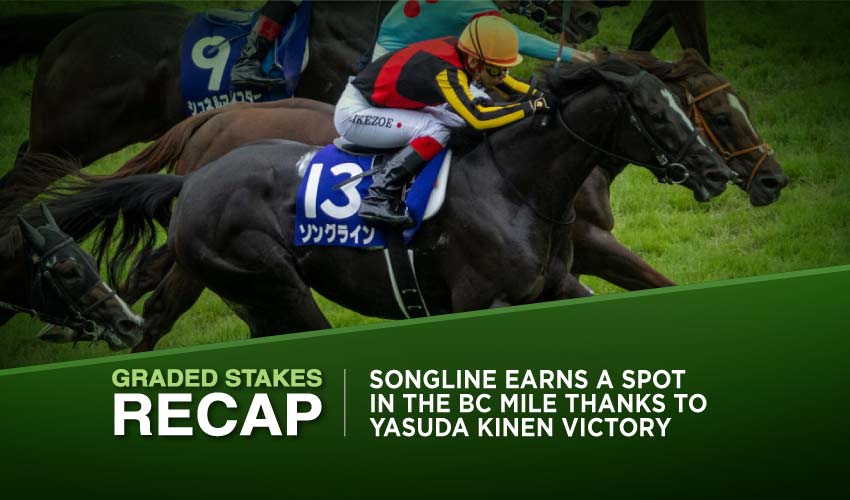 On Sunday, the highly treasured Japanese G1 took place at the Tokyo Racecourse – the Yasuda Kinen over a mile, where four-year-old filly Songline scored narrowly in front of one of the favorites, Schnell Meister. Songline earned a spot in the Breeders’ Cup Mile thanks to this victory.

The G1 turf event is held over a distance of a mile and offers the purse of 347,460,000 Yen. The prestigious race is open to three-year-old and older horses, among which four-year-old filly Songline (36-5) landed the victory under Kenichi Ikezoe.

The Toru Hayashi bound bay travelled in the midfield, upon which she was pointed on the outside where she gradually crept closer to the front, and in the final half of a furlong, she just pushed her head forward to bag the race in 1m 32.30s. Just a neck behind her, Schnell Meister (39-10) secured second place in front of boldly running Salios (147-10).

Songline has always oozed lots of class as her three-year-old campaign saw her running in second in the G1 NHK Mile Cup behind Schnell Meister, and then she bagged a G2 race, while her next big run came in Riyadh in February. Back then, she collected the rich prize, and even though her return to the Japanese track was a bit lacklustre, she built on that run to come on top on Sunday by bettering basically a stellar field.

If her team decides for or against travelling to the US in autumn, it doesn’t really change anything about the fact that Songline affirmed to belong to the best milers in Japan. Although beaten this time, four-year-old Schnell Meister is another four-year-old that forms the local elite of milers, and by Sunday’s gutsy effort, he helped everybody forget his disappointing performance in Dubai.

Moreover, achieving second place behind the filly was partially due to a lack of luck on his side. After galloping in the rear of the large field, it took too long before Christophe Lemaire aboard managed to find his mount a gap to throng in between the rivals. Still, he managed to leave behind third Salios by a head.

Serifos (77-10) was the only three-year-old contestant of the Yasuda Kinen, and he ran a good race in defeat. In the tight finish of about ten or even more horses, Serifos secured fourth place in front of another brilliant four-year-old filly, Fine Rouge (68-10). The most notable disappointment of the race delivered Elusive Panther (7-2) – the main favorite here, who couldn’t get past eighth place.